i think it is more of a trade embargo type of viewpoint.

How could this be a violation of the constitution?!?
It is a trade sanction, he is not taking away your ability to have the gun, just who you can buy it from.

What’s next though. I bet you he’s starting small with the AK ban from Russia now. Tomorrow he bans us from buying Russian surplus ammo (which is all I’m usually able to find for a reasonable price).

I feel this is just as powerful as a full blown ban on AK and semi auto rifles because now he’s not only creating more demand for them JIC they get banned but hes also limiting the supply causing a price increase and making it unaffordable for most people.

I like my AR way more than my AK but i bought my Ak first because I was on a tight budget at the time.

Think about it this way people are starting to wake up now more than ever and the first thing most are realizing is that when SHTF your going to need a gun. Not just a pistol or shotgun but a rifle. The best budget rifle and great starter rifle I would say is the AK47 (Some will argue the SKS but i think there garbage). Now most starting preppers would rather opt for the 350-500 dollar AK over the 600 to 1000+ AR. So by Obama limiting the options America now has for a cheap reliable semi auto rifle he has somewhat quelled the ability for the younger generation just waking up person to put tyranny stopping power in there hands. So it may not be an all out ban on the weapon itself but its defiantly an assault on it.

They can buy the American Junk....we need not support these other countries regardless if you feel it's their choice..

originally posted by: PraetorianAZ
But Obama in all his wisdom has decided to ban the AK 47 here in the US.

Did you even bother to read that EO? Obviously not.

Where does that EO even mention the AK 47?

You can buy one here www.gunbroker.com... if you want to.

So all because Alex Jones makes a silly claim some people believe it!

posted on Jul, 17 2014 @ 10:08 PM
link
Nothing in those links says to me that the AK is banned. I own 3, none of them russian made though, my uncle is a gun smith. He's merely prohibiting the import of rifles made by certain places, Russian made. Which I feel is in line with the sanctions he's making against Russia. To me, a little like, Russia won't sell us rockets or help us get to the space station soon enough, well fine we won't import other things from you! I know things go way beyond this, just an example.

Send your spent brass to me if the Russian ammo is banned. I'll reload it for you , I don't waste much time as of now reloaded 7.62 because of the cheapness.

originally posted by: macman
a reply to: neo96

Look at the Urban communities within the states death tolls - shootings in some of the larger cities. This should provide more data on how these weapons affect in mass many communities...

Glorified as the infamous Choppers And why are they called choppers? because they are acknowledged to _chop you down_ Some observing statistically (outside) may not understand how much these weapons govern and so ignore their impact over the years on the YOUTH and the communities they control...

Same weapon outside of the "Urban communities" affected so much does not produce the same results.

It is not the firearm's fault.

Seems your statement shows exactly the issue. The community.

Choppers are either helicopters, or raked our motorcycles.

originally posted by: macman
Choppers???? Is that like a Ghost Gun? Or a 30 clip magazine?

Yes, it can fire thirty bullets in half a second and I have six of these.

originally posted by: macman
a reply to: Ophiuchus 13

Choppers are either helicopters, or raked our motorcycles.


Your awareness on this serious situation has been confirmed

Just another example of someone in Govt going Full Potato.

You know there was a guy I knew, Kevin, he wasn't really a bright guy, but he made it pretty high up the Govt ladder. He was elected a couple of times, and had a wonderful way with the public and the media. He was able to wordsmith his way to the public and they were in awe of him.

Then, he held a news conference, and went Full Retard.
Not only did he speak incoherently on a topic he knew nothing about, he created new and bedazzling terms and statements.
He spoke of the evils of the "Ghost Gun". It is this magical firearm that is invisible to Govt agencies, was created by Unicorns and could fire .30-caliber clip to disperse with 30 bullets within half a second. And solidified this with stating thirty magazine clip in half a second.

There was also a woman from the same village, named Carolyn, who rallied against firearms equipped with barrel shrouds. You know, these are the things that that awful Predator used against Dutch and his group of elite commandos in the jungle.

Such horrible weapons and their accessories MUST be stopped.


And those damn Choppers. 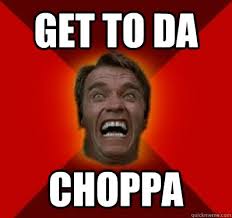 originally posted by: macman
You know, these are the things that that awful Predator used against Dutch and his group of elite commandos in the jungle.

Were is Ol' Painless when you need it? So much ignorance to hose down.


originally posted by: buster2010
Why is a person complaining about infringed American rights because they can't buy a foreign made weapon? Buy American!!!

You want Serbian when it comes to AK's.

Obama just wants to ban certain imports. There's already a lot of AK's here, though. But either way, this is in violation of the US Constitution and no American should stand for it.

I wont even debate with you as your awareness is exposed on this SERIOUS ISSUE. The masonic like wordplay in your recent post is irrelevant this is a issue in the United States and shouldn't be joked with at all as many are killed maimed from these weapons but hey its the communities fault so who cares right?

Carry on with your rant and jokes about a word you are ignorant too, but I wont feed for I have no reason to do so. I KNOW just how that petty word has overtaken many youths mind states to the point the YOUTH feel they all need them but that's not an issue is it
edit on 7/18/14 by Ophiuchus 13 because: (no reason given)

Honestly......what the hell are you talking about.

No the ghost gun is way more sinister. It fires a 30 caliber round and can unload 30 clip magazines in half a second. That gives it an effective 108k rpm cyclic rate. Never mess with a ghost gun