originally posted by: morefiber
a reply to: ~Lucidity
More like two dialects. Many people in the region can speak both with perfect accents.


you got a source for this? sounds pretty big

originally posted by: yeahsurexxx
is it olny me who noticed that none of the victims has shoes on?


You hit the ground at terminal velocity, your shoes will come off, unless you're wearing 18 hole doc martins laced up to the knee.

originally posted by: yeahsurexxx
a reply to: AngryCymraeg
I still have the feeling that this plane was loaded with dead bodies from mh370.


Same. Maybe they just did a switcheroo and remotely controlled both of them and used MH370. They're both Boeing 777-200ERs. Anything to identify it could have been changed easily prior.

posted on Jul, 19 2014 @ 06:34 AM
link
a reply to: AstralTrespass
the main story was that encoded date and tagged date time stamp was one day before, but its how youtube works, countless people uploaded videous and they get exactly the date one day before, u can check it by yourself. Plus in this intercept they are talking about where wreckage is landing, there is no way they could guess about it before its actually happens.

This is what we are trying to work out, which aircraft was this. From the face book photo it shows the wrong aircraft (RC, should be RD). I will check when this (RC) was last in Amsterdam

It appears that the RC was last in Amsterdam 11th July, so if the face book photo is correct it couldn't be of the MH17 flight, maybe he flew the same flight then and used the wrong photo to post on face book. 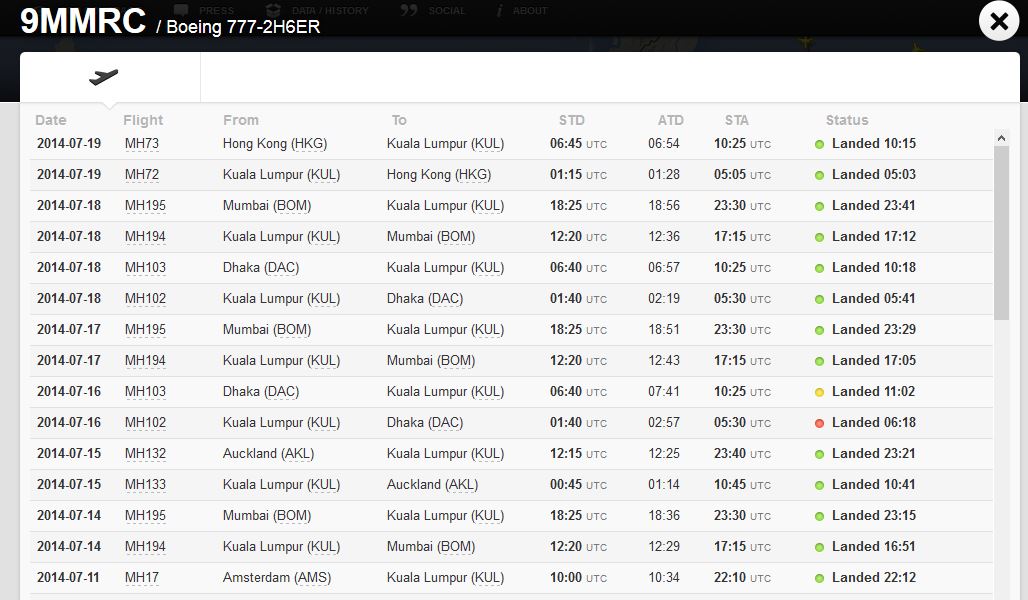 Even if all the engineering required to overtly change the MH370 aircraft to look like the MH17 aircraft was done in secret. that would still mean that there is one 777 hiding somewhere.

Now back in the real world. here i a fact for you. All of the internal structural parts are marked at manufacture with the Variable / Line number of the aircraft to which these parts are designated by Boeing factory. In order to remove ALL of these markings, the aircraft would have to be stripped down and sanded, and have all wiring and insulation replaced.

Beyond that you will have to replace ALL serialized components on the aircraft, and maliciously alter all the technical maintenance records, historically. Which again, is not only illegal everywhere in the world. it is also impossible.

Just for information, I work in aircraft engineering specializing in moving aircraft from airlines to airline, so feel free to ask anything about that, before you want to make blanket statement about how easy it is to do things like disguise one airframe as another, and expect it to keep that mask when subject to international crash investigations.
Sorry by this theory does not hold any water at all.
edit on 19/7/2014 by JakiusFogg because: (no reason given)

yeah. cuz we trust in boeing since the mh370.
they have gps trackers in each motor to tell them where and why something breaks.

but they can't find a plane.

Ill let you go back to calling Ukrainians Nazi's.

Any other excuses to shift blame away from the pro Russian terrorists rebels / russians?


Once again, for the third time, post a link where I called all Ukrainians Nazis?
Since I am a tolerant person, an apology might be accepted.
Come forward, nothing to be ashamed of.

posted on Jul, 19 2014 @ 06:45 AM
link
For a place that allegedly had bodies scaterred all over, I see none in the pics of the debris, and I count five in the ONLY original footage there is.(as far as I can tell)

The way some of these bigger pieces of plane lay there makes me wonder how they came down for them to land like that in that form, in that position.

No they don't, they have sensors, systems and logic, to find about when there is a problem, but it is upto the engineers on the ground to trouble shoot issues according to the maintenance reference material and do the fix. but there are no GPS trackers on the motors, I think you mean engines.

The only thing I can think of that vaguely reflects this inane post is is the ADS-B system, that works via the transponder system, which when turned off, which can be done, means the aircraft cannot be tracked.

Why they haven't found anything from 370 is as big a mystery to me and the industry, however I can state categorically, it would NOT be possible to disguise the 370 aircraft, and use it as the MH17 aircraft, and have that guise upheld, without anyone noticing. There are simply too many indicators. and its not all electronic.

Do not trust explicitly what Flight radar records show, they are fallible. Will a good and fun system this is in now way a replacement for real flight radar, or the ATC flight logs. it relies purely on third party receivers that pick up a single signal from the ADS-B

Difficult yes, impossible no, unless all paper records strangely disappear. I work extensively with PLM / EDMS systems and it is fairly simple to electronically reassign from top level down all parts to another project (there of course will be a trace of this), and this would fool most people, infact on some sytems this would even reassign the project number when the drawing is reopened. This why I always print a paper copy of my drawings and also pdf.

Quite simple, they camw falling out of the sky in a wide dispersal patter, after being blown to peices high in the sky. The site is spread over a massive area.

Look up the dispersal pattern for Pan Am 103. you will see the same thing.

originally posted by: Ploutonas
Here is a video : smuggled out a buk missile system and 2 missiles missing.

the video description says it goes to russia, but if someone knows that area, could tell us were its going. Someone from crimea/ukraine could tell us.

The video says a small lie, the buk-m1 system in the video, has the kiev colors, the russian edition, have colors painted .... If you type on google "buk-m1" and you choose to view the pictures instead of the global net, you can find out which is what there.

they have more video material, but they are soooooo hateful for russia, they do a horrible propaganda.... They damn putin all the time, etc

originally posted by: nutsoverbet
a reply to: AstralTrespass
the main story was that encoded date and tagged date time stamp was one day before, but its how youtube works, countless people uploaded videous and they get exactly the date one day before, u can check it by yourself. Plus in this intercept they are talking about where wreckage is landing, there is no way they could guess about it before its actually happens.

The cell phone talk was uploaded one hour later after crash appearing in news, its a radio intercept by SBU, they are kinda quick on such things u know.

Really, if I remember the phone call, the commander asked how long it was ago that they shot the plane, I think the guy responded with, half an hour ago.

So an intelligence agency intercepted this phone call, and half an hour later somebody has it already up on yt?


one hour later after crash appearing in news,

I don't know how much time later that was, but still "kinda quick".
edit on 19-7-2014 by AstralTrespass because: (no reason given)

originally posted by: JakiusFogg
a reply to: bigfoot007

Do not trust explicitly what Flight radar records show, they are fallible. Will a good and fun system this is in now way a replacement for real flight radar, or the ATC flight logs. it relies purely on third party receivers that pick up a single signal from the ADS-B

Agreed, but this would involve switching the transponders, as far as I was aware these are hard coded into the flight instrumentation.

While this may be true of electronic record systems, it remains that the paper records would remain. even if these were destroyed by the the airlines, the 145 organizations that legally have to keep records of work accomplished, along woith third party vendors and suppliers, as well as Boeing themselves, have records of components installed on a certain aircraft.

Changes are the flight controls remain the same PN SN as when built, this could easily be tracked though many sources.

Added to this we have seen photos of the engines. the disks are exposed. Each of these is a life limited part that must be tracked. The PN and SN again would be traceable to its birth, the same for the landing gear.

Added to that as, the point I made before, ALL of the internal structire of the aircraft will be marked with the orginal aircraft MFG identification number I.E VA123 (this is not the specific number for this a/c), this means that a side wall panel, stringer, frame, insulation, bracket longeron etc etc etc will all be marked with VA123, as well as the PN, and the position on the aircraft.


you got a source for this? sounds pretty big

Here is thread on same : www.abovetopsecret.com...

They are coded yes, but not "hard coded" tranponder codes can be changed, through pin programming a binary / hex number into the boxes.

a simple procedure, however the code is ONLY issues by the relevant aviation authority assigned to that airframe, and is not given arbitrarily.