They may have made minor variations to the course due to storms, but the flight plan was over the Ukraine from before take off.

Maybe 3, you forgot that maybe the Russians in Ukraine shot down it by accident. How could Ukraine have tricked them? Russians would realize it and cry foul!


originally posted by: Vovin
So you're saying those videos are not of the crash site?
I said "allegedly". I just saw it and thought I'd post it. The crash scene kinda resembles other video of the crash.

I'm saying BIN is not a valid source here and if you actually looking at their headlines you can see why.

your link doesnt work but id love to figure out how you determine aluminum strips dont belong to the wreckage. Your source must not realize chaff is just aluminum and in a wreckage there would be huge amounts of aluminum. Id i hope the separatists didnt release this video because it just shows how incapable they are at investigating a crash site. Chaff and a plane crash site wow.

Funny how you jump in, claim that you can't view the video, then started ranting about pieces of aluminum on the ground which is not what the video depicts.

The video was clearly taken by locals. I couldn't tell you if this was the same crash as the Malaysian plane because I was not there and did not personally witness it. But thanks for your assumptions about how this is separatist propaganda, I'm sure we all value your judgement.

Wow, that's not chaff. Not even close. Chaff is tiny little pieces of metal in bundles. If it was that long, you would be able to get one burst of chaff, to decoy one missile. These are chaff bundles used by the US Navy. That looks like toilet paper from the latrines.

I never claimed to be an expert on chaff or plane crashes. The video shows more than just those things floating in the air, if you look closely there are tiny flashes of metal all over the place in the camera's field of vision. Could it be just normal debris? Probably. But somebody alleged it was chaff so I wanted to see what people here thought about it.

The video shows debris falling. That's all. There is no reason to think that chaff, if it had been deployed in the area, would come down on top of the wreckage. It's designed to float for awhile, and is incredibly light. It could drift for miles. Small pieces of wreckage though, would most likely come down with the main debris field, especially if they came off shortly before impact with the ground.

posted on Jul, 18 2014 @ 08:37 PM
link
a reply to: milomilo
The US and Europe does not want war, it is Putin and the separatists that ignore the cease fire requests.
No one in the US wants to expand this conflict. The Russians have a long history of this type of behavior as they have been doing in Ukraine. If it wasn't for the fact that Ukrainian and Russians look exactly alike and speak the same language, Russians would have invaded already. They know Uks can infiltrate them like Chechens and Georgians can't. Putin is trying to grab as many little bits of the old USSR as he can before the game is done.

I was buying smokes earlier and saw the provincial newspaper (British Columbia) with front page headline stating that the separatists shot the plane down.

originally posted by: morefiber
a reply to: milomilo If it wasn't for the fact that Ukrainian and Russians look exactly alike and speak the same language,

There were rumours that the plane was escorted by 2 Ukrainian fighters minutes earlier, possibly causing the Russians to think it was a military plane. Though the theory still falls apart because as you said Russia would be crying fowl and releasing evidence if they could.

posted on Jul, 18 2014 @ 08:44 PM
link
a reply to: ~Lucidity
More like two dialects. Many people in the region can speak both with perfect accents.

dahboo77 channel is all BS. I looked at a couple posted here and they were crap.

IIRC, He tried to pass of the plane serial ending in Q for MH370 in some tracking video.

dahboo77 channel is all BS. I looked at a couple posted here and they were crap.

IIRC, He tried to pass of the plane serial ending in Q for MH370 in some tracking video.

posted on Jul, 18 2014 @ 08:53 PM
link
Is it nice now the instant this disaster happened, suddenly every Western Politicians and evrey

Western Mass Media have shifted the blame on russia and rebels without any shred of evidence ? 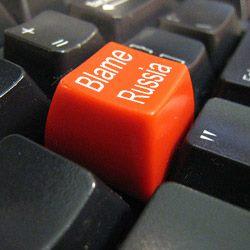 This false-flag should be formally recognised, and fully accepted as proof of the absolute evil of those that rule the West.

So it's wrong to blame Russia, but ok to blame the West with no proof. Double standard much?

posted on Jul, 18 2014 @ 08:57 PM
link
USA is master of false flags. I advise caution in believing anything coming from a US politician's mouth or a US news agency.

If you do not want to believe Russian news, then it is fine. But wait patiently until more information is available.

Remember current Ukrainian Government is simply a tool of USA. Ukrainian government is engaging in blind propaganda at behest of USA. So people should be very careful.

The American method is to fan emotions of people against Russia - its leaders and its people. The current event is a good example of this.

There is a war going on in this area, with a very strong likelihood that a plane will be shot down. I find it funny why commercial aviation is using this airspace.

What is this "militants" and "terrorists" business? Do not believe Ukraine propaganda. There is a civil war in Ukraine and both sides are armed.


originally posted by: morefiber
a reply to: milomilo If it wasn't for the fact that Ukrainian and Russians look exactly alike and speak the same language,

Some people are bilingual.
The two languages are very similar, based on what my professor in college told me, their affinity is somewhere between dialects of English, and, how languages of the same family, like Spanish and Portuguese can be mutually understood. I know, in general, the Slavic language group is more mutually intelligible than most, and that the fact they are right next to each other geographically, were once the same country, etc, etc. Not as different as Russian and Georgian, for example, that are not even in the same language family.
M

posted on Jul, 18 2014 @ 09:00 PM
link
There is every likelyhood that Ukraine itself shot the plane and then fabricated evidence.

There is no way we can believe Ukrainian government. This should be remembered by all.

An impartial investigation is not possible due to war.

originally posted by: Zaphod58
a reply to: milomilo

So it's wrong to blame Russia, but ok to blame the West with no proof. Double standard much?

so it's your default to blame russia without any evidence ? i thought americans usually want some evidence before pointing fingers to someone ?

ah well the moment this disaster happened , all goverment puppets from obama to mccain to biden spout the same line and blaming russia , with the western mass media supporting them .. conveniently orchestrated dont you think ?

not everyone in the world is as deluded as the american public .. many still have the objectivity to see that the current US goverment is running rampant like a crazy animal trying to antagonize everyone ..

this is the end of the line for america , with it's economy dead, it's currency attacked , america resort to the thing it does best : war and violence.. World Peace will come when American is gone..

A failed assassination attempt on Putin, by the Ukrainians or whoever, would look a lot better for Russia compared to the current view point - Russia may have supplied the weaponry that killed 298 innocent civilians..