originally posted by: RealByReel
This was posted on the 17th a month ago:

Soon will be shot down over the ruins of the liner packed full of innocent euro-tourists. Tse will be the occasion for the official invitation to NATO. So I see.


This right here ^^^^^^ needs more attention than its getting!!!

On the 13th of July one of the people, close to Kolomoisky twitted that There will be a surprise for Poroshenko from Kolomoisky soon and that it involves planes.

Latest: MAS officials said that the plane flew lower because of the orders of Ukrainian flight control, RIA Novosti Reports.

How do I know this?
My brother in law is an Indonesian passport holder,and he showed me the holes in his passport yesterday.
He also said he was pretty sure that neighboring Malaysian passports have similar holes in them when issued.

So the holes in the passports do not point to some false flag IMHO.


I was also thinking that the passports could have been cut by the "investigators" that found them, stopping them from being used again. Just a thought.


originally posted by: Hilux1996
This was in the David Icke Headlines this morning! 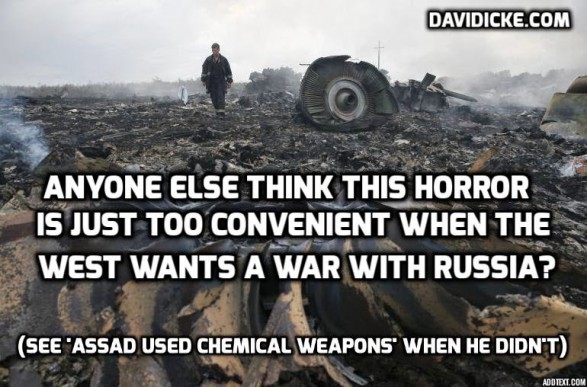 Explain to me how "the West" "wants" a war with Russia?

TBH, a war with RUSSIA is likely the *least* thing we want, first it would be an ultimate catastrophe (WW3 basically), secondly we cannot even afford it.

Nobody in their right mind would want to start a war with Russia, not even the USA!

The country may be a shadow of it's former self but they still have a lot of world class scientists and weapon technology and they pump a lot of what little money they have into their military capabilities. Not even in the same ballpark as taking on Saddam.

This article on Zerohedge suggests Vovin may be correct and you do need to dig deeper:

Vovin alleged, that other flights have been diverted to new a route. Your article states MH-17 unexplicably diverted from the usual, safer, flight corridor. While the first variant could be interpreted as the ukrainian air control luring this particular flight to its doom the second one looks more like malaysian airlines is to blame. Again its one of their planes inexplicably diverting from established flight routes. Could all of this be just another pilot error happening at the wrong place? Who knows how many of these happen unnoticed because they dont lead the airplane into contested airspace.


originally posted by: stolarz79
a reply to: BMorris

One question about your passport. Did your passport survived accident like this Malaysian 777 ? If so then they should make tanks from this material :>

It doesn't matter HOW FAR a passport falls, it's not going to tear or fold or crumple up like a "tank" would and due to its aerodynamics would NOT reach terminal velocity.

There is no point in trying to prove anything by the condition of recovered passports.

Exactly! It's about as suspicious as a feather making it back down to earth safely!

posted on Jul, 18 2014 @ 08:32 AM
link
After looking through the thread, there's actually no evidence of a missile being launched from the East

posted on Jul, 18 2014 @ 08:33 AM
link
After the first tape where separatists talk about a plane was debunked (it was uploaded at least 14 hours before the crash), Ukrainian SBU today published intercepted calls where they talk how they got BUK systems from Russia.

If this would be true, they would publish this call yesterday and not only after the first call was proved fake. Considering that separatists still didn't have radars to use this, even if they really got it from Russia, they could only use it as a scrap metal.

And now Ukraine DEMANDS weapons from NATO members to kill all separatists and counterattack Russia. Those silly Ukrainian want to start WW3.
edit on 18-7-2014 by baburak because: (no reason given)

posted on Jul, 18 2014 @ 08:35 AM
link
Alright, all credit here goes to u/Stultiloquent_Hermit over at reddit speaking about the photo of the plane tweeted from the gate:


Actually, we can almost certainly prove that this is not the accident aircraft. Malaysian flight 17 was operated with an aircraft registered as 9M-MRD, this photo shows what looks like 9M-MRC.
If you look carefully at the nose gear door you will find that the last 2 registry letters are marked on the outboard facing side. RC.
Quick explanation why only the last 2 letters: the 9M is the international registry reserved for Malaysia. Malaysia airlines being very likely the oldest operator in the country elected to have M as the first letter in their registry. This means that within the fleet of Malaysian airlines all airplanes are by default 9M-M something, hence only the last 2 letters are purposeful in differentiating one plane from another, this goes for flight plans, assignments, accounting, maintenance, etc... As such those 2 letters serve as an abbreviation an are usually stamped at various places around the aircraft so that from a distance you can quickly tell who's who.
Edit: The data log from Flightaware.com shows that MRC was in Amsterdam on the 11th of July, and yesterday was returning into Kuala from New Zealand, it has not flown since then, probably scheduled for maintenance. Here is the data log for MRD from Flightaware.com, that one will unfortunately never arrive in Kuala. 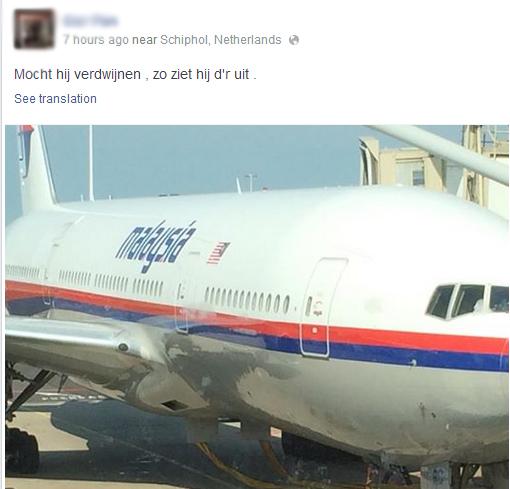 And the nose gear door markings in question: 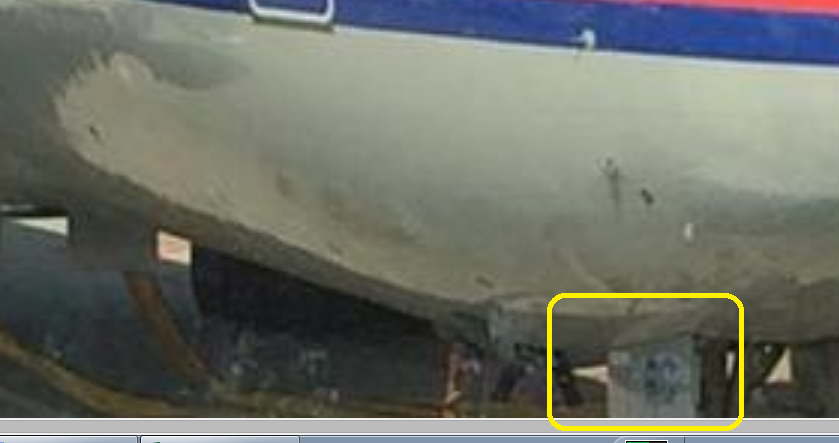 Americans are crazy and started believing they could do anything. The day of reckoning will soon come.

Russian empire will survive WWIII. Its American empire that will fall.

The time has come now. The grace of God has left the Western empire. It is time to go.

Dogs like Poroshenko bark a lot but have no bite.

Considering that separatists still didn't have radars to use this, even if they really got it from Russia, they could only use it as a scrap metal.

Why do you believe they didn't have the radar component of the system?

Kiev renew their offensive by heavy attacks on the area where the malaysian airplane got shot down.

so basically kiev who deployed SAMs all around the border shot the malaysian airlines as both a false flag and as an intro to their renewed offensive..

i hope malaysian goverment dont kowtow to washington and repeat their propaganda. malaysia should start telling the truth about MH370 and this shotdown. they knew the culprit and they still keep silent because they are afraid of USA.. now they got another plane shotdown, they should break relation with USA the most evil nation on earth

Latest: MAS officials said that the plane flew lower because of the orders of Ukrainian flight control, RIA Novosti Reports.


But that wouldn't make a difference at all, that SAM will still be able to hit it at 35000 ft.

Russian President Vladimir Putin called on Friday for a ceasefire by pro-Russian separatists and Ukrainian government forces fighting in eastern Ukraine to allow for negotiations.

"Direct talks between the opposing sides must be established as soon as possible. All sides in the conflict must swiftly halt fighting and begin peace negotiations," Putin said

If Russia thought the Ukrainians had shot down MH17, as part of a false flag, would he be saying this now?

I think the Russians just blinked.

Because it is the separate system and earth-based observatories record if they work. It would be the biggest evidence, if Ukrainians recorded any other radar systems in the area and not just theirs. Russia on the other hand already made a statement that they have recordings of Ukrainian radars searching for target right before the crash.

2000ft is not a lot but it is still an anomaly because dispatcher didn't have any reason to order the plane to get down. And Ukraine still didn't admit it. They only said there were no anomalies which is not true, as you see.

originally posted by: Nikola014
a reply to: Rocker2013

I know plenty about Russia, including the BS Putin stated on TV, to his own media, and then clearly lied for the world to see. I know for a fact (as does every intelligent person NOT in complete denial) that Putin denied invading Ukraine for weeks, and then ADMITTED IT in live media interviews.

I KNOW for a FACT that the Russian government abuses its LGBT citizens, has threatened same sex parents, has forced hundreds of couples with kids to flee the country. These are FACTS whether you want to believe them or not. There is video evidence of fascist Russian groups kidnapping and torturing people, and not being arrested. There are police reports of clubs and venues being gassed, firebombed and the people there assaulted, with NO police action taken.

I seem to know more about what is actually happening with Russia than you do, you simply don't want to accept the reality because you'd rather suck up to any nation that confronts the US regardless of their own Human Rights record.

I haven't seen any report that the black boxes have been taken to Russia. The last I saw was the Lavrov saying they had no intention to claim those black boxes.

Either way, I would prefer ANYONE to have them rather than a country suspected of being at least partially responsible for this mass murder. Russia should NOT be allowed anywhere near this scene. No Russian person, government official or agency member should be permitted within ten miles of any of the evidence at any time.

Russia is suspected of being involved in this, and therefore it is entirely proper that Russia be told to keep the f out of it until the governments of the victims have done their own investigations to assert the cause and responsibility.

And, finally, there are also a lot of people like you on here, rabid pro-Russians who will deny any and all fact in their efforts to cheer lead for any government that even remotely criticizes the US. People have a right to distrust the US, but not at the expense of all rational thought. You can scream about Russia being some mythical amazing country that's simply misunderstood all you like, the majority of sane, intelligent and rational people do not believe a single word of it.

Not every radar is searching for a target to destroy. What about ATC radar, etc. I would be skeptical of what Russia says.

They wanted to transport black boxes to Moscow headquarters of Interstate Aviation Committee that regularly investigates aviation accidents and incidents and is international body. Lavrov already said they won't take the boxes and that Ukraine has to organise international independent investigation.