Can you please link me two different vids of the crash site and/or showing more than 5 bodies? Not that I don't believe you but they don't show up in my yt searches.
edit on 19-7-2014 by AstralTrespass because: (no reason given)

Do you think the pilots were aware of the risk they took?

posted on Jul, 19 2014 @ 10:21 AM
link
there are rumors over here in the EU from some dutch friends in the Military that the Dutch are sending in troops to the site , as they are furious over the looting of the site and desecration of their dead countrymen.


Whether "the rebels" had the capability or not is NOT the issue.

If they didn't have the capability, this false flag plan COULD NOT work.


Exactly the American economy is built on having wars, without them the country would collapse

Here's just one. It shows quite a few bodies in with the wreckage.

There was an unexplained change of course of the Malaysian MH17 flight which took the aircraft directly over the Eastern Ukraine warzone.

He also said that the MH17 flight was escorted by Ukrainian fighter jets minutes before it was downed. It is worth noting that the presence of the Ukraine fighter jets reported by the Spanish air traffic controller was confirmed by eyewitness reports in the Donetsk region:

“eyewitnesses in the Donetsk region saw Ukrainian warplanes near the passenger jet. They say they heard sounds of powerful blasts and saw a Ukraine warplane shortly before the crash. (ITAR Tass)

So this was planned by EU/US Ukraine?

Like I said no surprise there! A lot of people including me knew this was the case with the airliner. It's not Rocket Science as to what is going on. They need to get to war with Russia! This is their plan. And it doesn't matter how many innocent people they kill in order to complete their plan! 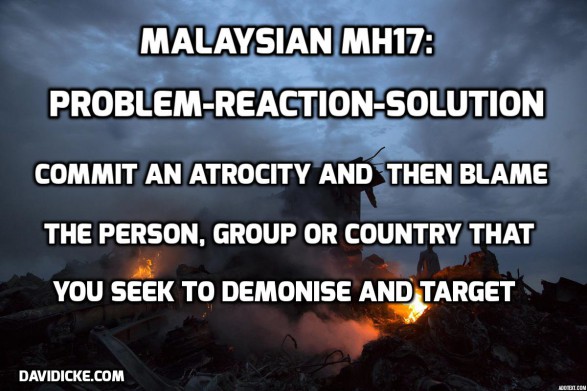 Of course they were. But until a couple of weeks ago there was nothing that could touch a plane at cruising altitude, so it was considered an acceptable risk.

That would require more balls than anyone in the Dutch government has. And yes the minister of Defence is a woman.

So any news on the alleged Ukranian fighter escort?

And why do you think they chose to fly there. Weather? This should be possible to back up right? With metreological data.

originally posted by: milomilo
just surfing some of the right wing blogs and boy every commenters there hot for blood and want to invade russia .. seems like the NSA shills been busy whipping out comments all around the world assuming it is russia's fault.

nice false flag but sorry anyone who,followed ukraine crisis knew this is inside job carried out by Ukraine intelligence abetted by CIA mastermind.

the amount of hate directed at russia is incredible.. and the nation that scream the loudest also the one who butchered iranian airline with cold blood.. i guess they kinda forgot about it, or they dont think iranian civilians victims worth mentioning..

Actually, I've been following the Ukraine crisis since the beginning, and I've not commented in any of the major Ukraine threads. I'm not right-wing in the slightest, but as far as I'm concerned, all logical evidence is pointing towards the pro-Russian separatists being responsible for the downing of the Malaysian Airlines passenger airplane.

I personally see no evidence whatsoever for this being a 'false flag' incident.


Whether "the rebels" had the capability or not is NOT the issue.

If they didn't have the capability, this false flag plan COULD NOT work.

America does not need a war. The only people discussing that are pro russian supporters who for some reason think an invasion of Russia is imminent. If the west / EU / NATO were going to attack Russia, it would have occurred when russia invaded Ukraine.

All you are doing is trying to shift the focus from the Russian / Pro Russian rebels shootdown of the plane.

posted on Jul, 19 2014 @ 10:26 AM
link
AS I posted many times from Israeli sources the IDF were fighting with the Nazis in Ukraine
"brothers" they called them
remember what the former maylasian president said about Israel?"

There was nothing "unexplained" or a course change, and if anything they were further SOUTH.

Already posted and debunked. The person associated with the account of those claims / account has since disappeared.
edit on 19-7-2014 by Xcathdra because: (no reason given)

There were something like fifty planes flying through that airspace that day alone. And several hundred the previous week or so. There was a Singapore Airlines A380 not far behind this flight.

Considering that one of the leading sources was a controller that claims they were ordered to fly through Ukrainian airspace by Ukrainian ATC, despite the fact that they were tracking for that airspace from take off at Amsterdam, I don't put a lot of stock in that claim.


originally posted by: bigyin
a reply to: JakiusFogg

I can't see the point of Russia bringing this plane down. Like they don't have enough to deal with already.

If the 777 was shot down by a military jet, then why not an American jet, or even an Israeli one seeing as the whole episode provided a timely smokescreen for their actions on the ground.

The problem here is that the western governments, forces, media can tell anything they like .... we have no way of verifying anything.

The west wants to attack Russia so we are told Russia did it .... simples

Sinking of the Lusitania 2.0

When she left New York for Liverpool on what would be her final voyage on 1 May 1915, submarine warfare was intensifying in the Atlantic. Germany had declared the seas around the United Kingdom to be a war-zone, and the German embassy in the United States had placed a newspaper advertisement warning people not to sail on Lusitania. On the afternoon of 7 May, Lusitania was torpedoed by a German U-Boat, 11 mi (18 km) off the southern coast of Ireland and inside the declared "zone of war". A second internal explosion sent her to the bottom in 18 minutes.

In firing on a non-military ship without warning, the Germans had breached the international laws known as the Cruiser Rules. Although the Germans had reasons for treating Lusitania as a naval vessel, including that the ship was carrying war munitions and that the British had also been breaching the Cruiser Rules, the sinking caused a storm of protest in the United States, as 128 Americans were among the dead. It also influenced the decision by the US to declare war in 1917.

It also influenced the decision by the US to declare war because of MH17.

originally posted by: wycky
Has anyone mentioned the plane that was tailgating MH17 seconds before it disappeared off the radar?
Video Here

I read an article in indian newspaper that said there airliner was behind it on same flight path.

This is the 747 cargo plane that stalled and crashed at Kandahar over a year ago,

this is a scam and fake. It has been reported.