spot the firearm [ or accuracy in reportage ]

posted on Jul, 16 2014 @ 03:07 PM
link
this story crossed the desk at munkie HQ today - at first glance a " regular " story of a man who was found to have a significant collection of illegally held firearms

I see large amounts of ammunition and ordnance - but no firearms

other reportage is worse

but not a single firearm

I collect some of the same type junk in the calif desert and haul it to scrap metal recyclers.

Some one that is a felon in calif if caught with the same scrap would be arrested and the cops would throw away the keys because felons can not possess firearms or AMMO fired or not.

posted on Jul, 16 2014 @ 03:45 PM
link
in the UK the weapon or individual components or ammunition including spent shells is treated the same
in law if you don't have the appropriate licence its an absolute offence and possession is a mandatory
5 years jail.

our establishment REALLY don't like the thought of an armed free population.

So how far out does the lunatic state want to draw it?

It works here.
We don't have armed police and we don't have an armed public.
I for one am glad people with illegal firearms get five years.
We can get a gun If we wish it just means a licence. 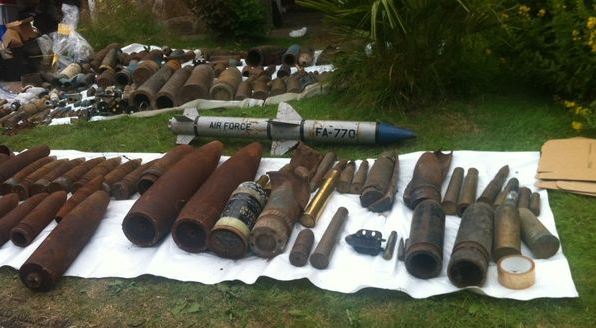 Worth a knock on the door

For inert shells? They're no more dangerous than furniture or heavy books.

I assume inert because if they were live they wouldnt be collected like that. The police would have evacuated several blocks and destroyed them.

posted on Jul, 16 2014 @ 04:46 PM
link
It sucks that a guy with an innocent and non-threatening hobby is treated like a criminal because some stiffs in government don't agree with it.

posted on Jul, 16 2014 @ 08:40 PM
link
Non-threatening? Have you seen the condition of those things? They are a tetanus infection waiting to happen.