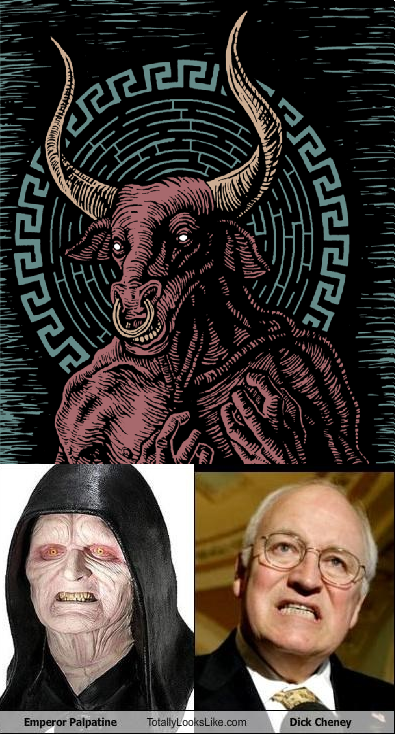 Cheney was returning from a recent interview on Fox News and he was mad as hell. Being a stone eyed minion of Satan himself here on earth, who's mission it is to spread fear and hate whilst amongst us in human form, his job had just gotten considerably harder. Who had let that imbecile Megyn Kelly on Fox News he thought as he slammed the door of his carriage shut and paced towards his dark lair and began to shed his human form; fox had always been such a useful tool in the past.

As his tail hit the floor, his horns sprouted and his humanoid mouth morphed into a wet hairy snout he closed the door behind him and briskly picked up his glowing orb. To calm himself he checked the fridge before consulting the others, picking up one of his skinned kittens and crunching it whole, bones and all, with his gnarled yellow fangs, the saliva dripping from his snout and cooking the felines flesh making it smoke as he chewed.

His hoofs clacked on the stone floor as he sat down opposite Obamas currently lifeless empty exoskeleton, wiping the blood from his mouth he stared into the orb to speak to his dark masters.

"What should I do about the uninitiated one I spoke to today?"

The all too familiar smirk lifted one side of Cheneys minotaur snout on hearing this news.

"Excellent, I will prepare the potion now"

The words had hardly left his snout before the tinkling of jars from his eager imp minions was set in motion, preparing to mix the ingredients, waiting for their master to give them the ingredients.

"Half a foxes beating heart" snarled Cheney. The imps opened cupboard full of live caged animals, and the baby foxes box was opened; a stake was promptly pierced into its rib cage by a particularly ribbled looking imp. Cheney paused for a while, enjoying the animals futile writhing.

"Two drops of Glen Becks tears" with this one of the imps whispered to another to go downstairs to the swimming pool.

"And two pubes from Bill O'Riley" the imps put gas masks on, one simply fainted, but soon the potion was complete.

Hastily Cheney grabbed the potion with two outstretched hooves, securing it in his puss filled Minotaur pelt, and after picking up and ripping the squealing head off one of his imp companions as a snack ascended back up to the top of his lair, the dissent of the previous interview all but forgotten now the issue would soon be resolved.

His plan was nearly complete, with his seeds of terror and fear still being sewn across the world the populace should soon be pleading for the deployment of the trillion dollar black budget amoral drone army him and his dark masters would soon be in control of.

Cheney reflected nostalgically on the previous decade when he was in power and the sycophantic nature of Fox News, a state he would soon be restoring; feeling the cold blood of satisfaction course through his malformed genitals as he did so. His human form starting to return as the sunlight streamed in through his front door his crocodile smirk returned, another day, another step closer to world domination. Another day in the life of Dick Cheney.

Dick Cheney is a shape-shifting Minotaur hell-wraith. Don’t say I didn’t warn you.
edit on 16-7-2014 by ZeuZZ because: (no reason given)

posted on Jul, 16 2014 @ 03:57 PM
link
a reply to: ZeuZZ
I am sure the minotaur of old are rolling in their graves that cheney is being linked to them.
How terrible for the minotaur.

originally posted by: rickymouse
But Dick is on our side, he targets Lawyers.

His hunting accident where he shot his lawyer friend.

posted on Jul, 19 2014 @ 08:11 PM
link
His "Lawer friend" was actually just about to expose his secret minotaur lair in the New York times. I've researched this extensively, it was not an 'accident'.