They disagreed with the fact they werent included.

It's not a war, its a bombing operation against Gaza.

You verify your targets when shelling a civilian population. So yes, very likely they knew who their targets were in order to avoid killing reporters (who were a couple hundred yards away).

There is no hunkering down. It's obvious you don't know what you are talking about, so no sense in wasting my time.

They are an evil our government supports, and an evil that tries to disguise itself as a victim. Maybe they aren't the only evil in the world, but you surely shouldn't defend them or help their cause in any way.

posted on Jul, 17 2014 @ 03:14 AM
link
a reply to: GogoVicMorrow
I love that every time I get your wasting my time,or its obvious English isn't my first language,or I have no understanding of the situation from you Palestinian supporters,sir I can tell you've never been bombed or shot at SO YOUR WASTING MY TIME.Goodbye,

originally posted by: GogoVicMorrow
You seem to miss the point that Israel shouldn't be bombing at all.

So it is ok for Hamas terrorists to constantly attack Israel, but Israel is not allowed to defend itself!


originally posted by: GogoVicMorrow
You seem to miss the point that Israel shouldn't be bombing at all.

So it is ok for Hamas terrorists to constantly attack Israel, but Israel is not allowed to defend itself!

Firing bombs at 4 kids and then reloading to finishing off the survivors isn't defending themselves, it's murder.
edit on 17-7-2014 by sosobad because: (no reason given)

That doesn't make sense either.

If you have been bombed or shot at (which is what you seem to imply) you should better relate with Palestinians.

It's just obvious you don't have much sense of what it is to be trapped in the open air prison that is Gaza and being controlled by the IDF and having super oppressive laws against you that the Israelis do not have. If you break them, no matter how minor, you are beaten and held as long as they want. An Israeli committing the same crime will get out the same day.
They withhold water and aid. Israelis aren't really being bombed or shot at. The rockets go into the desert and if they go anywhere near populations they are shot down. The only person killed so far was an Israeli working with IDF on the border.

Meanwhile 80 percent of the 200+ people killed in Gaza were civilians including a good amount of children.

I already have looked it up. Who cares if they are "included" or not. They either agree with the terms or they don't. Saying hey that's a great deal, but you did not include me in making it so I won't sign such a great deal and will just keep launching attacks because I want peace so bad makes zero sense.

Unless you can show me what was in the agreement they felt was wrong then they are 100% responsible for every attack. A cease fire was offered, they refused.

I do apologise I did not mean to be harsh whilst I emphasise with the Palestinians plight there is also the practical reality they are never going to beat Israel in a fight,they have no tanks,no planes,no proper artillery nothing,their only course of action is to negotiate and if they conduct hostilities Israel of course is not going to negotiate so they will sit there and rot they too have to give up violence or their cause goes nowhere.

No. It's not.
Because Israel is a country, Gaza his a city.

Israel can't refuse to allow Palestinians to have an independent state and oppress them then bomb them like an attacking nation when they cause Israel trouble. Sorry, shooting the military equivalent of a bottle rocket into the desert (or shooting them down when they come near a populated area) is not the same as bombing indescriminately into populated areas and then using guided munitions to kill children. A 30 lb rocket shot into the desert without the shooter every knowing it will hit anyone is not the same as a jet dropping a one ton bomb on a populated street or a home.

If they wont allow the Palestinians their own state and wont allow them aid then they shouldn't be allowed to bomb them like they are independent. If you want to force them into a prison and control them then you go in and find the people actually responsible and you take care of the people, you don't bomb them.

OF course not. They are in a god damn prison. Israel controls everything that goes in or out.


You don't seem to understand that Israel is NEVER going to negotiate! Why would they negotiate with the people the stole the land of? They want them gone. They stole the land on a b.s. concept. What do you think Israel wants to do for Palestinians. They don't want to and never with negotiate because they don't have any positive feelings for them nor want to give them anything. They hate these people.

What makes it a great deal?

You should see my most recent post above too, because you obviously don't understand this conflict.

They should be included and if you want to know why, well because they weren't and they continued to fire rockets, they were later included and they stopped, even if it's only a 6 hour ceasefire. Those 6 hours serve a purpose, Israel however knows what it means and they wont say and the fighting will continue.

The problem is you sympathize with Israel and they are in the wrong and because of that you will never understand.
edit on 17-7-2014 by GogoVicMorrow because: (no reason given)

What made it a bad deal? I don't need to prove it was a good deal, saying you reject it for no reason other than you were not asked about it earlier is ridiculous and childish. That's the reason they gave. So since they did not object to any terms, that is the evidence it's a good deal.

I understand the conflict, you are so hate filled you are blind.

No it's not ridiculous and childish.

My god are you mindless? You can't make a deal for someone, a fair deal is generally between the parties it effects.

I made a deal with my friend that you owe me a hundred bucks. It's a good deal, if you refuse it you are childish. Sorry about your luck, i'll send you my address.
edit on 17-7-2014 by GogoVicMorrow because: (no reason given)

posted on Jul, 17 2014 @ 04:21 AM
link
Some casual responses by Israelis in social media in regards to this incident: 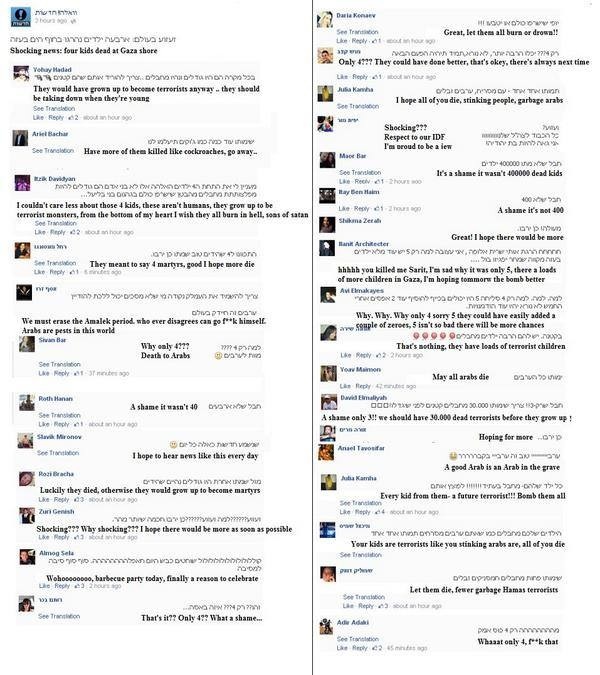 Ummm no, when two sides are at an impasse a neutral 3rd party often times brokers a deal.

Now as to your post, simply a logical fallacy. The deal you brokered is bad because I am giving you $100 and getting nothing. I can show why it's a bad deal, it has nothing to do with you making the deal without including me. Make a deal where you give me $100, do not include me in creating the deal, and see if I say no.

Your turn, show me why the ceasefire was a bad deal. Apparently one of us is mindless ...

originally posted by: GogoVicMorrow
a reply to: khnum

You don't seem to understand that Israel is NEVER going to negotiate! Why would they negotiate with the people the stole the land of? They want them gone. They stole the land on a b.s. concept. What do you think Israel wants to do for Palestinians. They don't want to and never with negotiate because they don't have any positive feelings for them nor want to give them anything. They hate these people.


Netanyahu says there will never be a Palestinian state

"“I think the Israeli people understand now what I always say: There cannot be a situation, under any agreement, in which we relinquish security control of the territory west of the River Jordan,” Netanyahu said, leading Horovitz to say: “That sentence, quite simply, spells the end to the notion of Netanyahu consenting to the establishment of a Palestinian state.” Just Bantustans, what we’ve observed again and again in recent years. "
edit on 17-7-2014 by Vovin because: (no reason given)

originally posted by: GogoVicMorrow
Gaza and being controlled by the IDF and having super oppressive laws against you that the Israelis do not have. If you break them, no matter how minor, you are beaten and held as long as they want. An Israeli committing the same crime will get out the same day.

What nonsense are you babbling now? There are no Israeli troops in Gaza, the last left in 2005.

How do you tell the difference between a civilian and a Hamas terrorist?

Umm.. they werent at an impasse. They didn't bring Hamas into the discussions.

Proof they weren't at an impasse? Now that they HAVE brought Hamas in, the have a cease fire.

Also the third party generally facilitates rather than stand in for the little guy being oppressed.

You are an excuse maker, that's for sure. I hope your agenda serves you well one day.
edit on 17-7-2014 by GogoVicMorrow because: (no reason given)