A pointless excercise ? You wouldn't fly an airliner like that loaded with passengers !

( Though it could be useful dodging terrorist missiles in years to come...)


Lol..
You don't.
It is a demonstration....the pilot is having a little fun..
Just showing what the plane can do.
No pilot would dare put 200+ passengers in a deadlock upchuck...unless trying to outrun a SURFACE TO AIR MISSILE.
:-)

It's not the fall that kills you. It's the sudden stop at the end.

Lol...
No the fall is to much for my heart and colon to handle ( tmi )
I would be lucky if I got to the sudden violent abrupt quick stop at the end.
But 2 points for that..you sir are correct...
Sheesh I snarffed Pepsi just now..

I like this vid. Some of the flying looks er um not strictly by the book...

posted on Jul, 16 2014 @ 06:16 AM
link
When I was young and bold I used to do airshows in my super swift. I tried to do many things like Bob Hoover as far as energy management.

The Swift when it was first produced had an 85 Hp continental. Mine had sliding canopy, sticks and 210 Hp. which was polished and ported (static would produce 235 Hp) To say the bird would dance is an understatement. The Swift fire which I owned at one time had a 420 Hp gas turbine engine and is the only Swift to do 325 (?) MPH at 12,000 msl and not come apart... The aircraft had beautiful lines and paint. It won many trophies for best custom classic just sitting on a flight line...I never flew it with the gas turbine for the were using it as a test bed for the Lopresti Swift fury..

Where I was employed a few guys who worked in the training department knew I did air shows and usually after getting my check ride out of the way would let me play with our full motion simulators.

The 727 could do many things but was a total pig if you got her slow (280 knots seem to be the speed she liked to start stuff). On the other hand the 737-300-500-700 (800 and 900 not so much) series were great maneuverable aircraft. On a 12,000 runway, a/c lite and break ground gear up flaps up hug the deck and by the end of the runway doing over 250 start into a nose up victory roll. The bird rolled great especially with a little rudder input.. The 700 series and 500 were my favorite. I could loop both of those aircraft in the sim and basically do just about anything a real airplane should do. The 727 was a real pain to get to loop or the sim was not up to the task..? Roll yes, loop not very successful.. Never tried it in the real bird/world/ ( I liked my job to much).

I would not hesitate to roll just about anything for if done right the bird does not care as long as positive Gs are maintained. I have actually rolled a UH-1H helicopter (more than once) or maybe a better saying would be I got her on her back and if done properly you would end up nose pointing to the dirt and doing 80 to 90 knots straight and level after pull out.. The bad guys would always stop shooting and watch because they thought you were hit.. Sounds like a war story because everyone knows the old Huey couldn't do that stuff.. I used to have a picture of a Cobra flown by a friend of mine inverted.. Like I said, as long as almost positive Gs (not negative) and a steady hand most things are possible..

Funny in a sad way..... I have only flown a friends aircraft once in 12 years since I retired... and I do not even miss flying...The push button aircraft took away allot of skill that many pilots prided themselves upon... also maybe because I dread getting on an airliner for over 22+ hours and flying overseas).. There were just great friends and allot of fun times in my other life.

Now I spend most of my time trying to get a golf ball to go straight when I want it to ! Shot 2 over today (unusual for me normal game is mostly mid to high 70s) and won a little money... One of Life's small pleasures

The angle of tip does the same as a winglet, minus the weight. They started using tip shaping on the 767-400.

Doesn't look too much like MSFS, although with certain expansions and post-processing you could probably get close. MSFS doesn't have the capability to make an atmosphere that realistic and also lacks the lighting effects. Also you could render something effectively indistinguishable in a 3D computer graphics program.
edit on 16/7/14 by C0bzz because: (no reason given)

posted on Jul, 16 2014 @ 10:02 AM
link
How very cool! Thanks for posting. It's an amazing piece of technology! I did see that the landing gear was up during the flight.

My husband has been involved in this plane since 2005, writing the software that tests the flight software. He took a tour of it in Phoenix, but didn't get to go up.

It's so damn impressive!

The Geek Squad (hubby in the center): 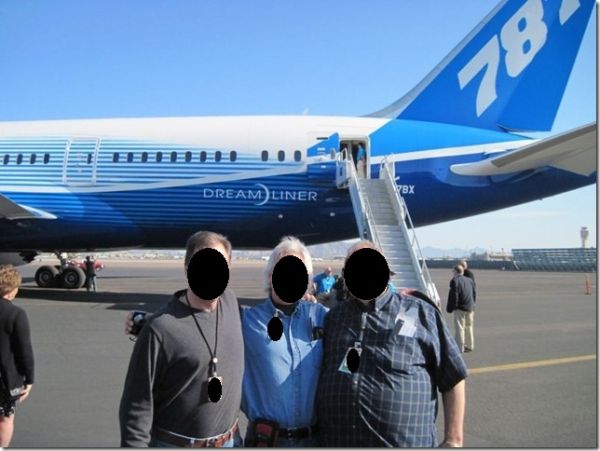 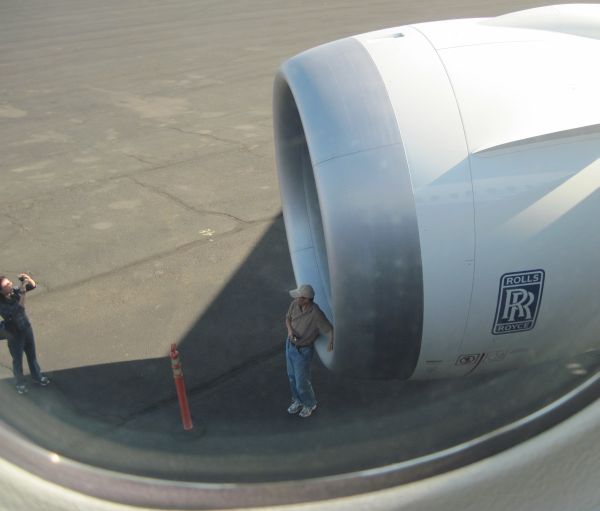 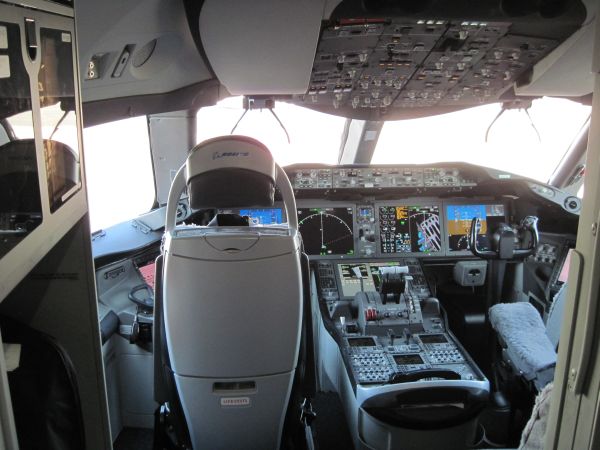 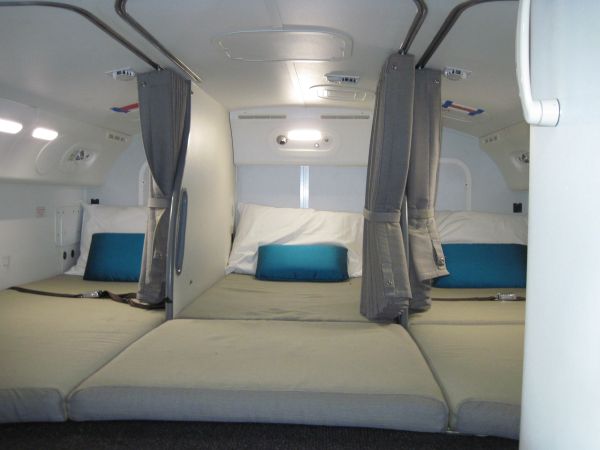 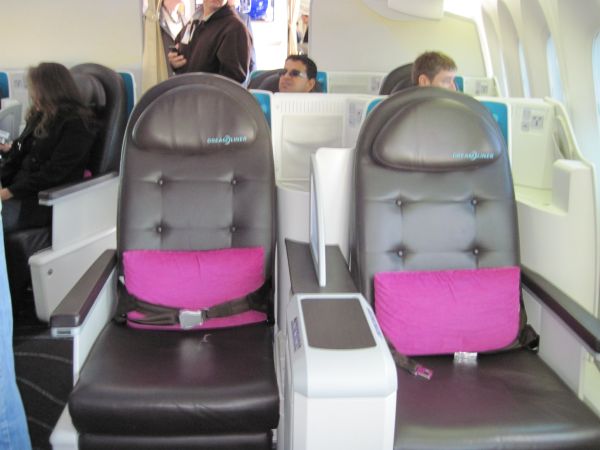 Most "transport category" airplanes like the 787 are stressed for 4 Gs positive and -2Gs so most of the maneuvers on these videos can be done with half of these limits. The closest to the limits was after the near vertical climb with a negative G push-over. The push over unloads the airplane to a weightless state where it can accelerate to it's maneuvering speed quicker.

The certification process for these airplanes should be made public so people can see what these birds can do. My favorite is the accelerate/stop test where the plane starts a take off roll and at flying speed it is kept on the runway with maximum braking. Lotza noise and smoke!
"


I don't know why but the wing break always sent cold chills down my spine. The thing that I find very interesting is the use of composites in the load carrying structure like the wings. I've heard that it's half the weight and twice as strong as steel...cool!

This test looks scary to ride on:

It flexes like you wouldn't believe. Some of the takeoff and landing videos the deflection made my heart skip a beat.

posted on Jul, 16 2014 @ 02:24 PM
link
Boeing has run into a new problem with the Dreamliner. The reliability is up to 777 levels, and the fuel burn is so much better than older aircraft the airlines don't want to park them for software patches.

Luckily the patches are minor. Boeing has the nuisance alarm problem to 85% caught, so are refining patches for the last 15%.

Cool video! There's so much new stuff since I stopped flying. Much of the dangerous testing and training can be done in the a simulator before doing it for real. When I started flying, most of the training was in the plane and there were many broken airplanes. Sims changed all of that. The characteristic of new planes can be programmed into the sims so when the pilots actually fly the new plane they have a good idea how it handles. So when you see this video with the pilots doing engine-out take offs they probably did it in the sim several times.

They had flown almost the entire 787 test program in the simulator before the first engine was started.

Those high bypass engines are truly amazing in that jet engines are as efficient as piston engines now. The bad part is there isn't small engines for the homebuilders just the deep pocket commercial guys.