The Backwards way that France argues about Science and Religion

"In the first few years of this century, France was rocked by an aggressive controversy involving the question of the evolution of life. I am sure that you are aware of such public fights in the United States between a religious public and a school of atheist scientists who love to stir the pot.

Interestingly, the same conflicts in France are typically between an atheistic public and scientists who see more in the physical world than its visible surface has to offer. In this situation a group of scientists decided to go public with a “European manifesto.” In 2006, it was published by Le Monde, one of the large French daily papers. “Religious or metaphysical ways of thinking,” the manifesto begins, “should not, a priori, interfere in the ordinary practice of science.

However, we also consider that it is legitimate, indeed necessary, to reflect, a posteriori, on the philosophical, ethical and metaphysical implications of scientific discoveries and theories.”

Huh. That's odd. It never would have occurred to me that an atheistic populace could be schooled by a more spiritual scientific community. That's quite a different picture of the ol' religion vs science brouhaha that I have come to know and love here in the good ol' USA. Here, the picture is of a religious population arguing with an athiestic scientific community, generally speaking of course.

It would be interesting to see a panel discussion between those French scientists and our scientists, like Richard Dawkins.

posted on Jul, 15 2014 @ 05:48 PM
link
Don't forget the historical background.
The strength of atheism in France goes back to the politics of the nineteenth century, when loyalty to the church and loyalty to the Republic were at opposite ends of the political spectrum.

My understanding, from the excerpt you provided, is that metaphysics and religion are welcome only at the point where scientists decide what to do with the information they uncover. The process of uncovering said information is reserved for strictly scientific methods, whereas the subsequent applications may be steered or advised from a spiritual point of view.

Which is not at all surprising.

posted on Jul, 15 2014 @ 06:31 PM
link
Some of the greatest Philosophers in the Western world were, of course, French. Philosophy is an integral part of French thinking past and present.

French scientists accept philosophy as part of the human mystery, part of humanity itself.

Philosophy is part of the current National Curriculum in French High Schools and degrees in Philosophy are fairly common in France.
edit on 15-7-2014 by antoinemarionette because: added text

How would you describe/categorize the current philosophy among the French populace, and also of the French scientific community?

Well, um...they are scientists. I don't pay a dentist for spinal therapy. It's unfair to ask them to do a 180 just for the benefit of those who are uncomfortable with what science says.

Those who interpret choose to interpret because they don't like what they're told. Perhaps they're the same ones who "interpret" the Bible into agreeing with them, rather than the other way around.

The French populace is politically astute, defiant and highly critical of their leaders and those in power.

Oh, so SCIENCE is to thank for the fact that we have gravity. I see.

Tell me, which of these philosophies do you think that the presence of gravity is most likely to support?

1. Realism. This philosophy holds that the fundamental elements of reality are independent of consciousness – this is the doctrine of strong objectivity. A tree in the forest is real, even when it is not being perceived; the moon continues in its space-time orbit, even when nobody is looking; and so forth. The doctrine of strong objectivity is further augmented by another doctrine – causal determinism. There are many different subphilosophies within this basic realist view, and I will only mention two that are useful in the discussion of quantum philosophy:

2. material realism, which considers matter to be the only fundamental reality; there is only one order of reality, matter (and its extensions, energy, and fields), according to this view. All else, including consciousness, are epiphenomena and are ultimately reducible to matter. Thus materialism comes hand in hand with epiphenomenalism and reductionism. Furthermore, since the only reality is that defined by space-time, the doctrine of locality is held fundamental.

3. nonphysical realism, which permits orders of reality other than matter, although we may directly experience only the material order. Bohm’s idea of implicate and explicate order is an example of nonphysical realism.(9) Since there is more than one order of reality, locality is no longer essential; neither are epiphenomenalism and reductionism.

4. Idealism. This philosophy holds that the fundamental elements of reality must include the mind. Within this broad category I will mention two subdivisions that will be important for our discussion:

5. dualism(or pluralism), which considers mind and body to be separate worlds both having primary importance. This philosophy hardly needs further elaboration.

In the words of Admiral Akbar: 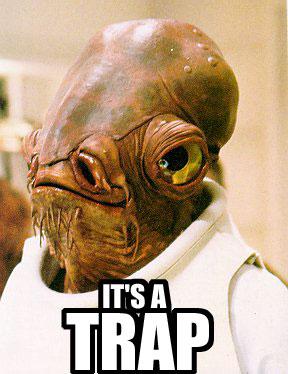 Oh that's really neat, and it makes perfect sense to me. My take on what they are saying is that as far as “Religious or metaphysical ways of thinking,” are concerned, neither should have any influence on the direction that scientific research goes in, but also that those ways of thinking are legitimate when it comes to the critical analysis of what science has produced.

ETA: On another read through I realize that they also seem to be inferring that not only scientists should go after the product of science with a "religious or metaphysical" lens, but that everyone might benefit from having a go at it.

That's even more cool. I swear: I'm moving to France.

What an excellent summary of that statement.

You have really understood the depth of their meaning.