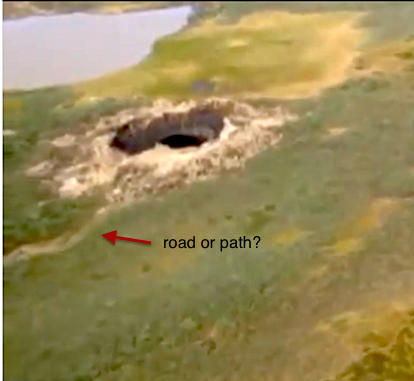 It's only visible in the very beginning of the video (which I found a bit odd since it did display some of the surrounding area), there is some type of path/road or wash out leading to or from the hole. There's also a body of water that looks to be relatively close, yet the hole appears to be dry.

Not sure we'll ever know exactly how it was formed, thought the "giant auger" suggestion with an ET twist might explain it Picture a large craft hovering above and directing some force down into the earth in order to displace the soil to form the hole where it entered the Earth's crust to points unknown

originally posted by: Rob48
a reply to: TruthxIsxInxThexMist
Newsflash... A giant hole has opened up in Russia. Police are looking into it.

In Russia, sinkholes do not sink into the land. The land sinks into the sinkholes.

posted on Jul, 16 2014 @ 07:32 PM
link
It looked like an underground explosion blasted a crater and then the hole opened up. Maybe it was stockpiled explosives or nuclear material. Or chemicals stored in a mine. But then again, I wonder about the series of underground " quakes" in Oklahoma and that enormous sinkhole in nearby Kansas. Maybe somebody is excavating deep underground and blasting out tunnels or chambers. The quakes are always the same magnitude. 4.0, 4.0, 4.0. Are they sure fracking is going on in that small area of Oklahoma near Oklahoma City?
Also, hasn't the North Magnetic Pole speeded up its southern route and moved closer to Siberia? Maybe that had something to do with it.

posted on Jul, 16 2014 @ 09:11 PM
link
Giant Spice Worms or the worms from Tremors. In the Canadian North the permafrost is receding. The ground beneath is very soft. If a gas/methane explosion/release were to happen, I imagine it would bubble the earth up and out of the way. Leaving a tidy berm around a hole. In this case a large hole. Nothing more, nothing less and yes the permafrost is receding in all Northern and Southern Arctic regions due to Global Climate Change.

Yes (regarding the North Magnetic pole shifting), but the expectation is that there will not be seismic events associated with the shift (from north to south). Of course...it's not like we have experienced it before to know for certain what will happen.

I imagine there will be a lot of very confused birds and sea critters.

Not in the south. The ice coverage is actually increasing in the south. I think it has increased by something along the lines of 14% recently.

It's a bit confusing why ice coverage would increase in the south while retreating in the north. Something else we do not understand and cannot predict with current models.


originally posted by: chiefsmom
Why can't it just be a type of sink hole? Some cavern or something underneath that "gave out"?

Well until or if they close my thread - the material was forced out and not in so it isn't a "collapse". It's also a near perfect circle which makes it a bit odder < is that a word? LOL

I'd say "near perfect" circle is quite strange indeed. Things like that don't happen in events that usually entail a destructing mechanism like cave ins, eruptions of various kinds, or explosions, implosions. (maybe with implosions sometimes..)
When circles are formed like that, it usually means it is by design of some sort.

Maybe some sort of military thing that no one knows about because of extreme classification perhaps..
Even Russia has those, plus compartmentalized in the extreme. Sometimes so extreme they forget it exists and it turns into someone wanting to paint the moon red. (Russia had that planned once)..

The US air-force wanted to detonate an atom bomb on the moon once, so looking at all the ridiculously stupid things that leaders of governments do for attention, perhaps Russia had a top secret bottle of Vodka that was Gigantic plus aged and ready to drink, and then the Russian Military boys being so starved for excitement, opened the bottle before equalizing a top secret vacuum chamber system pressure equalization procedure clearly marked, and it Imploded! And in a lucky aftermath, those impatient soldiers got more vodka to drink than they wanted, but suffered some injuries being so close to the event.
(Okay, I was just making it up. but sometimes reality is a lot "odder" than the usual, especially in old RUSSIA) But they usually are a tad more conservative when it comes to making complete asses of themselves.

(I also am wondering how a compartment in a near vacuum would implode if the pressure where to suddenly and quickly equalize, as in creating a circular effect within the physical influence of the event.

Vodka is how Russia has always won their day against unwanted attention where military projects are concerned, so they break out a few bottles and even share with the state run media, so nobody knows anything anyway.
In the USA they just make up things that are stupid enough that our MSM news reporters think it is real. They have zero science training and this they prove often when attempting to give details about anything related to a scientific event.
But Vodka would have made them a lot smarter.
edit on 16-7-2014 by NoCorruptionAllowed because: added maybe with implosions

Based on other craters seen around the globe, this looks most like an impact crater, that occurred over a "hollow" in the earth, which resulted in initial impact ridge, followed by a sinkhole type of collapse. It's akin to a bullet passing completely through a plastic plate. The soil erosion on the "cone" walls seams consistent with a couple of years of natural erosion, which by the way is 'new', in geological timescales.

originally posted by: StealthyKat
Freaking bizarre! And to Dave, who suggested something PUSHED it's way out...thanks for the nightmare dude! LOL!

Thanks for the visuals LOL. I forgot Catwoman was that HOT.

On another serious note, because Catwoman is about as serious as a heart attack, if you look at the image an explosion should have sent the debris two or three times farther and it should be more dispersed.

You can do a little experiment (I did), take a small dessert saucer (rounded bottom but not a bowl), turn it upside down and bury it in hard packed but fairly dry sand (you want it to produce a flow pattern). You'll need to have 4 mono-filament lines (fishing line, strong but thin) attached to the saucer so you can bury it, but still pull it out level. Bury it about 1/2 of its diameter into the sand and pack the sand so it's a little higher and sloping on one side, not much, just enough so it looks like the terrain. Now pull it out slowly at first and then a little faster and see where the sand goes. You'll find it makes a very similar pattern to the one in Russia and if the sand is a little damp, it leaves a very well defined hole ;-)

To get a better idea because the scale of the sand particles is a bit of a problem, you can use nano-structured quartz or cobalt.

originally posted by: StealthyKat
Freaking bizarre! And to Dave, who suggested something PUSHED it's way out...thanks for the nightmare dude! LOL!

It sure looks that way doesn't it. Nice av

when the explorers get there, i'm sure they will be trying to find things out.

Could there be a underground Volcano eruption??

Eyewitnesses are reporting water at the bottom, specifically, a fast moving stream. But erosion doesn't entirely explain the hole because of the ejected material on the surface.

"Perhaps, in the beginning there was an explosion (artificial? meteor?), then the soil under the funnel fell into a fairly wide underground river."

The jury is still out on the cause of the explosion. Methane maybe?

Maybe there was a partial collapse, and something blocked the underground river. It found the weakest path and went up, and then around a big boulder (or whatever clogged it) and then back down. It bubbled up first, broke the surface, and then managed to unclog itself.

If the pressure was strong enough, it would be kind of like a mini mud eruption, leaving a rim around the hole.
edit on 17-7-2014 by Darkblade71 because: (no reason given)

posted on Jul, 17 2014 @ 06:39 PM
link
This is obviously the work of giant Alien gofers bent on taking over Russia, forcing its citizens to become vegetable gardeners.
edit on 17-7-2014 by murfdog because: Typo