BRICS Bank Launched, First President To Be From India

FORTALEZA, Brazil: The BRICS group of emerging powers launched a $50 billion development bank on Tuesday to be based in Shanghai and a $100 billion crisis contingency fund, according to a joint declaration.

The new development bank's first president will be from India while the board's chairman will be Brazilian, according to the declaration released at a summit in Fortaleza, Brazil. 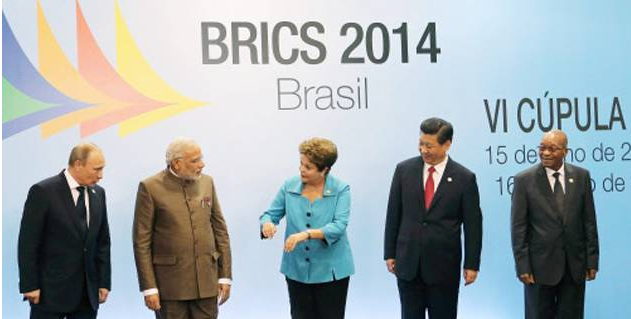 The bank will have an initial subscribed capital of $50 billion followed by an authorized capital of $100 billion, equally shared among Brazil, Russia, China, India and South Africa.


BRICS Bank Launched, First President To Be From India

posted on Jul, 15 2014 @ 02:37 PM
link
The bank and fund are seen as counterweights to the Western-dominated World Bank and International Monetary Fund (IMF).
edit on 15-7-2014 by awakehuman because: (no reason given)

Pretty slick how China and Russia took a back seat to India and Brazil for the big debut considering who has the most influence based on investment. Very low key, nicely done.

I suspect we will see much interest from countries like Iran, Syria, Argentina, Cuba, etc. In fact that's probably why Putin did the big photo op in Cuba last week.

All in all BRICS seems a good idea. Anything that helps offset IMF control can only help the human race in the long run.

You beat me to it. I don't see us abandoning them wholesale but just like you stop paying your kid's cellphone bill once he gets a job they should stand on their own. Let China and Russia foot the bill. We've certainly done it long enough and we have enough problems at home.

posted on Jul, 15 2014 @ 04:44 PM
link
This was sort of BRICS we have to do something because this is not working out. Economic growth in its members has dropped in half since the creation of BRICS and they can never agree on anything. Even this is going to have problem ever getting off the ground because nobody can agree and where the HQ will be. They are also having problems because they can not create a common from at the WTO of which Brazil holds the Presidency. Brazil and India seems have some real issues with each other over trade restrictions, and South Africa to lesser extent. And of course this has to be approved by everyones govemernts so they can begin in a year.

All in all BRICS seems a good idea. Anything that helps offset IMF control can only help the human race in the long run.

Yeah, its hard not to feel some support for this effort: At this point in history the anti IMF propaganda just writes itself. The jump out point for me was when they burned those people alive in Ukraine, days after the IMF said their loans were in jeopardy unless they did something about them. Then US journalists tracing fascist movements in Ukraine rising to power:
original.antiwar.com...
Then I go today, to look at the big IMF members. Under the US, Germany and Japan. The old Axis members from WWII, with Two of the Allied members from WWII in Brics. Not sayin' modern Germany or Japan are fascist, but the big picture just looks bad, IMF. Its really looking like an organization that doesn't have the welfare of the world in mind, but rather the interests of a smaller club of powerful western interests.

Exactly what I was thinking. Hopefully the Rothschilds aren't pulling strings behind the curtain.

We?? Who's we?? The banks are not we. They pull money out of thin air to loan to those countries. Legalized fraud.

posted on Jul, 16 2014 @ 04:00 PM
link
If the BRICS want to actually move from being developing nations to advanced industrial nations like the West then they need to consider internal political reform, tackle corruption, income inequality and a bunch of other issues. There are no successful developed nations that are not democracies (hint).

originally posted by: paraphi
If the BRICS want to actually move from being developing nations to advanced industrial nations like the West then they need to consider internal political reform, tackle corruption, income inequality and a bunch of other issues. There are no successful developed nations that are not democracies (hint).


You got it. Key word is corruption. US of A never had it. It's written into law.

World needs an alternative. Mutual financial help alternative is good. Competition is good, is it not?
BRIC poised to help each other if cash shortage arises.

posted on Jul, 16 2014 @ 05:49 PM
link
Not saying it is death to anything. Countries around the world seeking help must have option as to where this help to acquire.

Why it would mean 'death' to 'America' slogans?

Just like on a market, countries should have a choice as to where to apply for financial help.


Where I am wrong?

Hell between China and India that accounts for over 2 billion people alone.