More Flooding in Manitou Springs---and trying to save my mom's house there.

So far everything I've done so far seems to be working out pretty well... Still keeping an eye on things... Like I said if gets bad one big bolder will knock out all my work.

FYI renting a skid steer or any other equipment isn't all the expensive as you think.... provided you plan out your job so you get back to the rental store as quick as can...

So for $200 bucks and 24 hours I managed to get a job done in one day what it would have taken weeks to do with just the wife and me. okay so yeah the brother-in-law broke out his backhoe too, still...

anyway, looks like if we get threw today we'll be okay... for now at least? 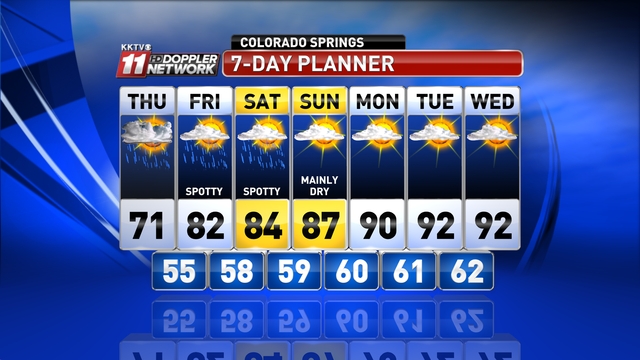 I hope all your hard work holds. Sounds like you didn't lose the access road/driveway. That can really suck. Our driveway washed really bad before we had the big ditch dug. I'm seriously thinking about a rock retaining wall for my garden.

You got a good deal on the bobcat. We have to go as far as Pueblo for heavy equipment rentals so it's a hassle for us. We have friends with backhoes/plows etc. They help dig us out in the snow/mud without breaking the bank.

We've got an 8' high fortress fence around our backyard. It's impossible getting heavy equipment back there, so it's me and the shovel. We're in cattle country, the fence keeps them/other critters out.

Watch for the lightning people/cars are getting hit. The other day lightning was striking all around the hubby was yelling for me to come in but I had to save my garden. As bad as that was I felt lucky we dodged baseball size hail that hit east of us.

It's not a pleasant rainfall either it's a damn wall of water/hail you can see coming right for you. The wind goes absolutely nuts, we've been getting micro-bursts ahead of the storms. Working out in it is dangerous to say the least. I thought the fence was going to come down, squash me but it held.

Ya know my place is over by Durango... and last week I went through the same stuff over there... Softball sized hail...Lighting blew all the tomatoes off my plants... I mean they just exploded right on the vine... I'd never seen that before....

Naw we did okay with the road.... Might have to put in a new culvert this fall...sooner if we get more heavy rains???

When I come back I'm going to have to do some roofing...
one of the panels got ripped off in one those micro burst dealy-o's

Softball sized hail...Lighting blew all the tomatoes off my plants... I mean they just exploded right on the vine... I'd never seen that before....


Wow. I've gardened for years in CO, dealt with many disasters but I never thought lightning could destroy my tomatoes.

I don't know if it's from years of drought or what but the lightning seems more supercharged.

There was a strike last year on the rocky outcropping behind my garden. It sounded like a plane coming down fast. I had time to duck, then wham. It reverberated, shook the ground. I went up expecting to find wreckage or an exploded tree but couldn't find any sign of the strike.

It scared me enough to move my garden this year. That's why I'm dealing with flooding issues, I'll get it worked out. It's up against the house now, I have better hail protection and a place to run for cover.

A guy got hit in his garage in Aurora. In another incident a woman's car was hit/set off the airbags causing her injury. Depending on what you're touching cars aren't all that safe but exploding airbags isn't something I'd expect.

We've been dodging the hail so far but our roof's a mess from the micro bursts. We took care of the driveway but the county neglects our road.

There's an "earthen" dam that shouldn't be here. Our road crosses a deep arroyo, the culvert's blocked and the road bed is holding back a huge amount of water. I won't drive across it. There's a drop off on one side and water up to the road on the other.

The county tried draining it with pumps but gave up. They dug a trench but it overflowed cut the road in half. They fixed that and now they're just hoping it drains on it's own. We can avoid it but other people use it everyday.