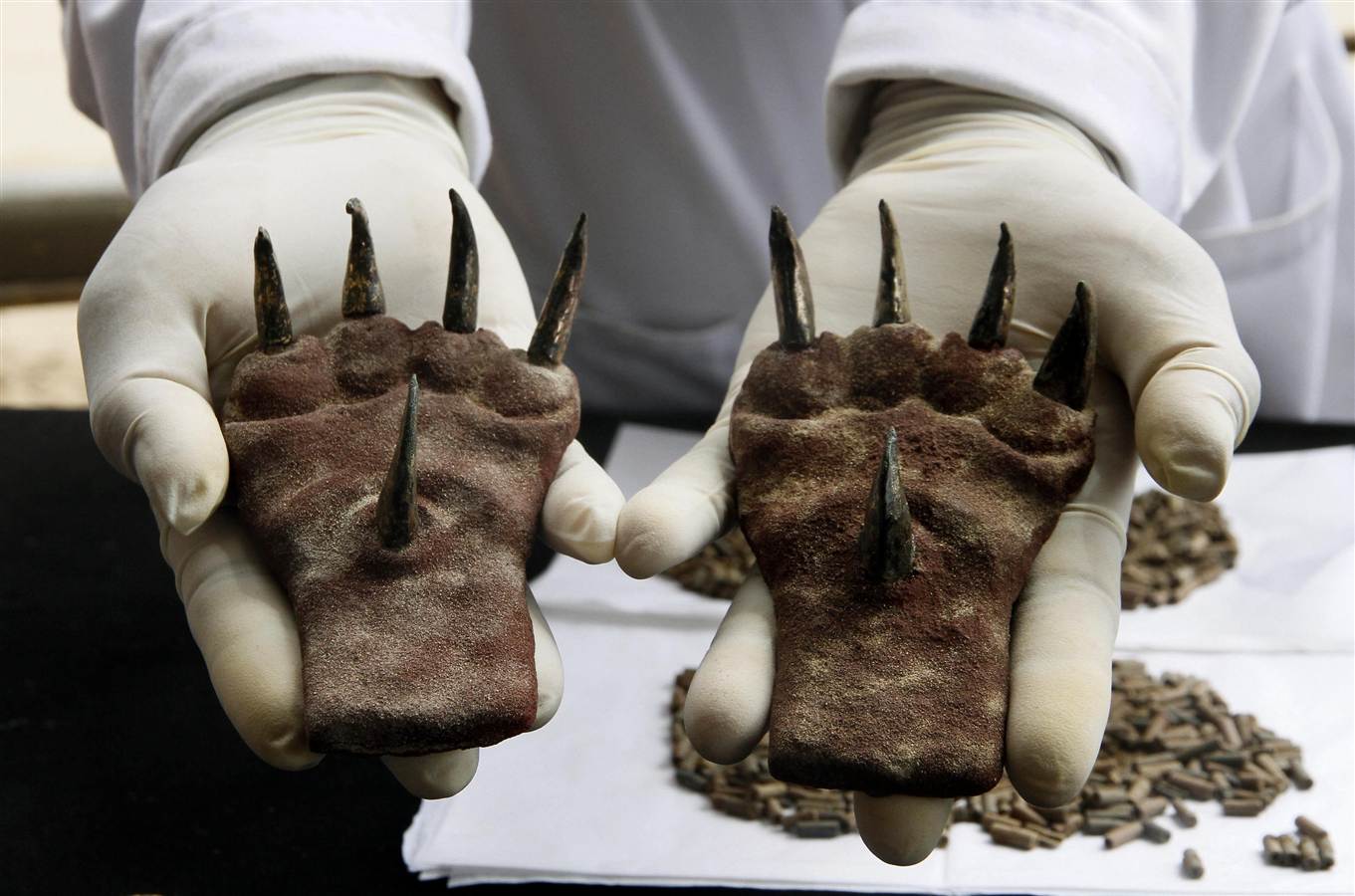 Archaeologists in Peru say they have unearthed the previously unknown tomb of a nobleman from a pre-Inca civilization known as the Moche. The tomb contained the remains of an adult male, plus artifacts indicating the man's elite status, according to the Peruvian newspaper El Comercio.

Among the most intriguing artifacts are ornamental metal pieces fashioned to look like feline paws with claws. The paws may have been part of a ritual costume used in ceremonial combat, El Comercio reported. The loser would be sacrificed, while the winner would get the costume.

Trujillo, displayed the pieces as well as a copper scepter, bronze earrings, a mask and ceremonial ceramics on Thursday. "The scepter signifies power; the earrings, status; and the ceramic piece is typical of an elite personage," Uceda told El Comercio.

He said the tomb and its contents, which are thought to be 1,500 years old, could shed new light on the Moche culture, an agricultural and artistic society that collapsed around the year 800.

I don't remember ever hearing about a similar find. As a side note, I find it very interesting that this pre-Incan culture would view the scepter as a symbol of power. Scepters/Sceptres/Rods/Staffs have been a significant symbol of power in many cultures for thousands of years in Northern Africa, Europe and the Middle East. I wonder if this symbolism dates back possibly tens of thousands of years and shares a common origin?

I found an image with more of the artifacts that were found in the tomb (below) as well as some more detailed information at The History Blog. The scepter can be seen below along with what I believe are two eye coverings, many many beads and some very serious (ear) plugs. 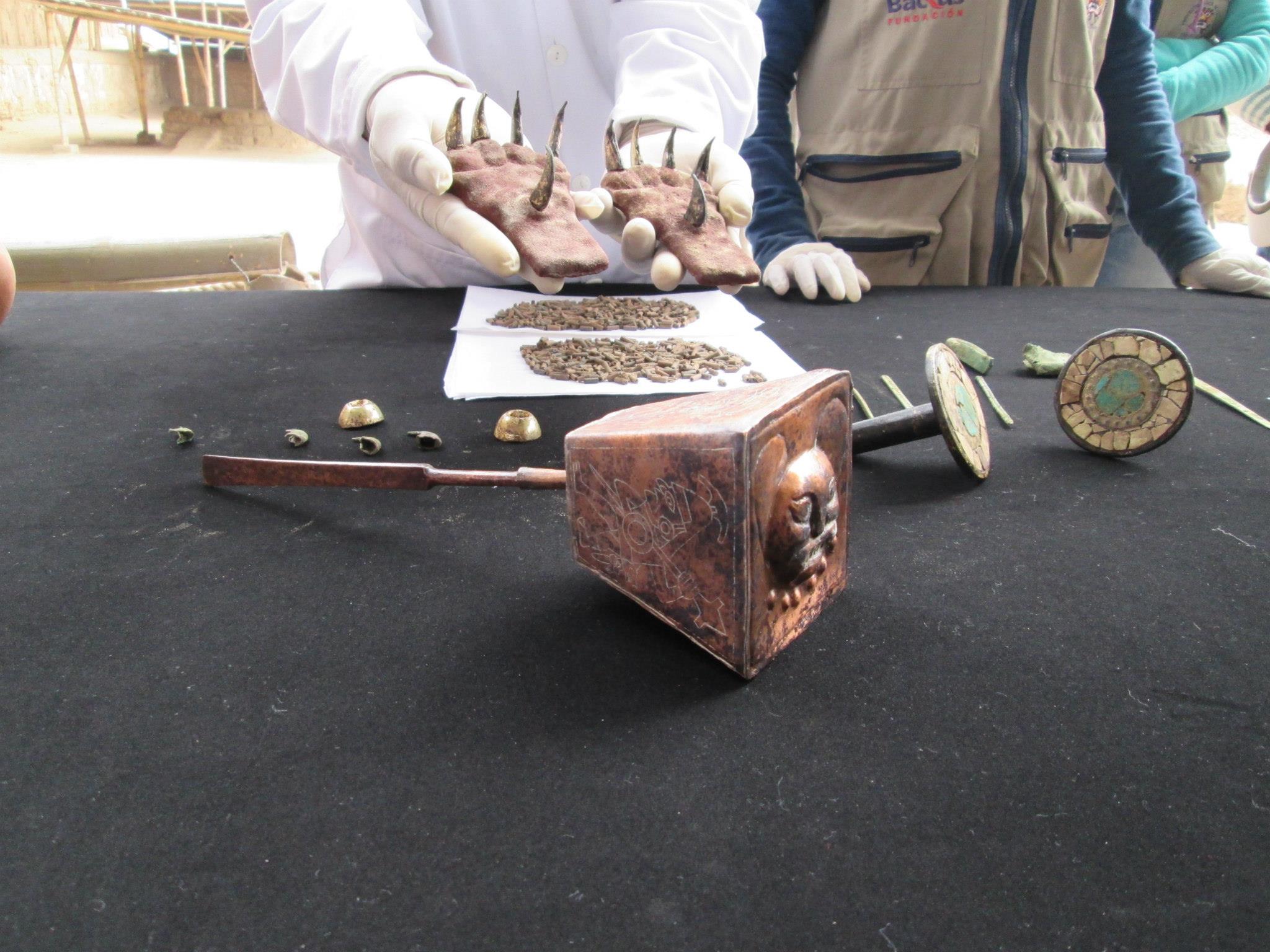 The below image is actually Lord of Sipán, from a Moche tomb unearthed in 1987. My apologies! 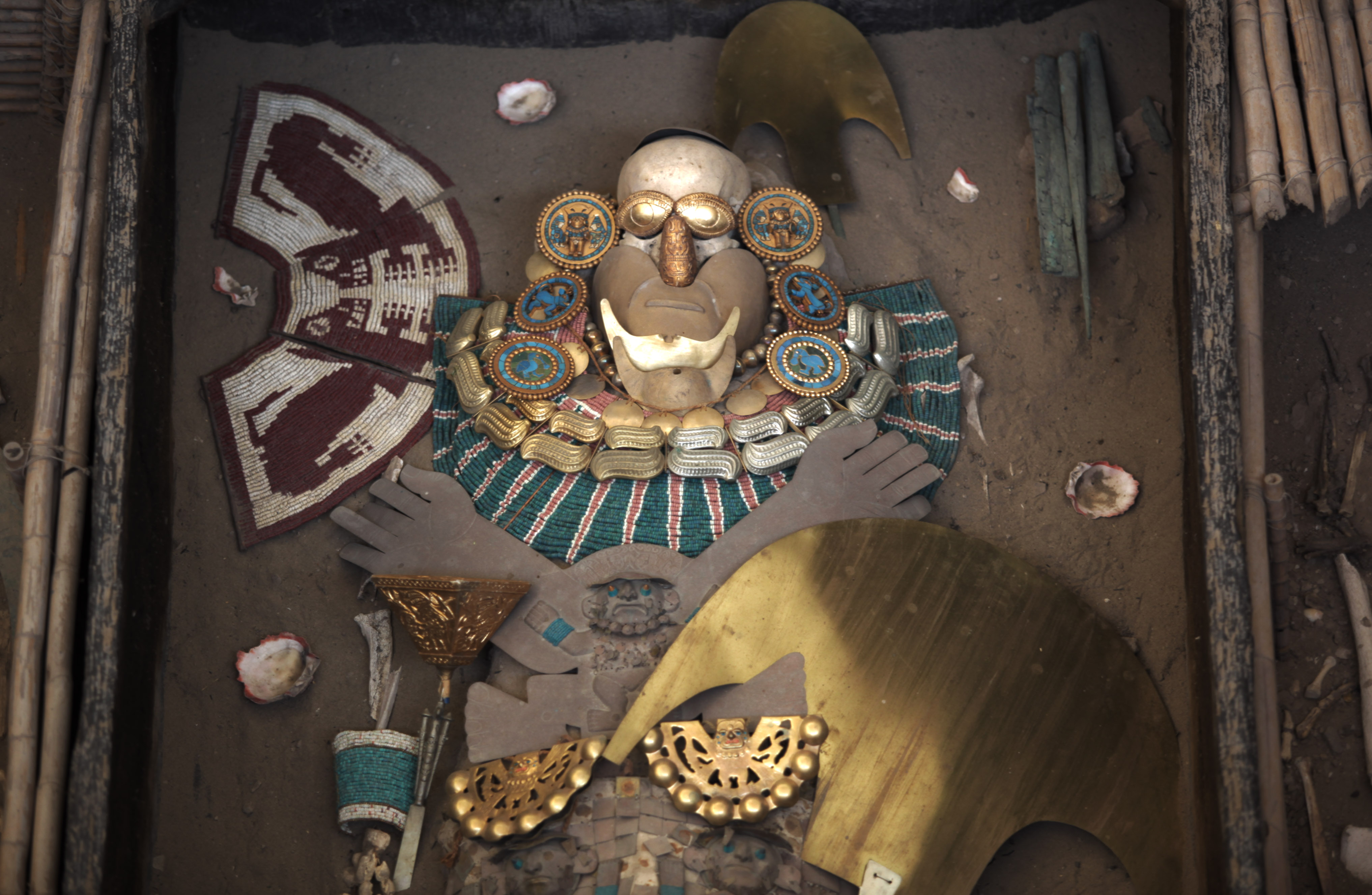 originally posted by: Snarl
That mask is awesome!! Somebody oughta make a meme out of it.

It's definitely not as fierce as I would have expected for a costume won through mortal combat. He kinda looks nonplussed about the whole affair, as though he'd been peacefully resting until a team of very ill-mannered archaeologists disturbed him.

what an awesome find, love this kind of stuff

It may have been related to a club which may have been one of the first weapons mankind made, and by its invention greatly increased his 'power' over animals and other humans.

Interesting thread, thanks for posting this

Aye, "flared and squared" clubs were certainly in-vogue in the Central and South Americas, i had a fascinating paper on them which i just looked for but it must have been saved on my old PC which i replaced a few months ago.. i cant remember for the life of me which peoples it mostly focussed on but it was possibly Caribbean. I'm totally gonna make one.

posted on Jul, 14 2014 @ 10:03 PM
link
Don't discount the role of phallic imagery and association with strength/virility in the scepter's case, either.

The ceremonial costume is pretty sweet, those claws look like they could do some damage. Makes me wonder if the winner received a ceremonial scratching post to keep them in good condition.

It may have been related to a club which may have been one of the first weapons mankind made, and by its invention greatly increased his 'power' over animals and other humans.

Interesting thread, thanks for posting this


That makes sense. I would guess a solid stick would be right there with the rock as the first weapons used by man. The stick being the archetype for clubs, bludgeons, maces, staffs, etc. What got me thinking is the use of the word scepter which typically implies a full-length staff or a wand (shortened staff) as opposed to a mace or club. The staff/scepter being a symbol of power, authority and even divinity (in the form of a wand) going back at least to Mesopotamia and prominent in ancient Greece and Egypt.

Don't discount the role of phallic imagery and association with strength/virility in the scepter's case, either.