Toronto Koo Koo Ka Choo Choo: Transit and the race to be Mayor

posted on Jul, 14 2014 @ 01:26 PM
link
Toronto is Canada's largest city, its financial capital, its entertainment capital, its second most industrially diverse city after Montreal and an immigration magnet both foreign and domestic. It's a busy place and needs an efficient transit system. We who live and vote here know that all too well.

We all have memories of overcrowded subway platforms and visions of streetcars lined up to the horizon on Queen St.

When Toronto's candidates for Mayor, including Rob Ford, are not mulling over the personal problems of Rob Ford, chances are that they are mulling over ideas of how to improve the city's transit system and how to pay for those improvements.

Some of us, Canada's second class citizens of part time shift workers, who live without company pensions, paid holidays or dental benefits, who can't go out for a beer with colleagues when the shift ends at 8 AM or who wait in the chill of January along windswept Bloor St., Sunday mornings, for the privilege of strap hanging on one of the crowded, backed up Bloor St. buses (Blue Night Specials) at 7:30 AM, because the subway doesn't open until 9 AM, we, I say we, are all in favor of improving the transit system and eagerly await the improvements, confident that improvements will be made and anxious only about whether the improvements will actually be extended to use by us.

Having brought us to that point, I would like to lighten proceedings somewhat by showing some subway maps from around the world.

Paris: Very comprehensive. Layers of tracks and long escalators. Changing trains is a non trivial task. (I've been on it, but many years ago.) 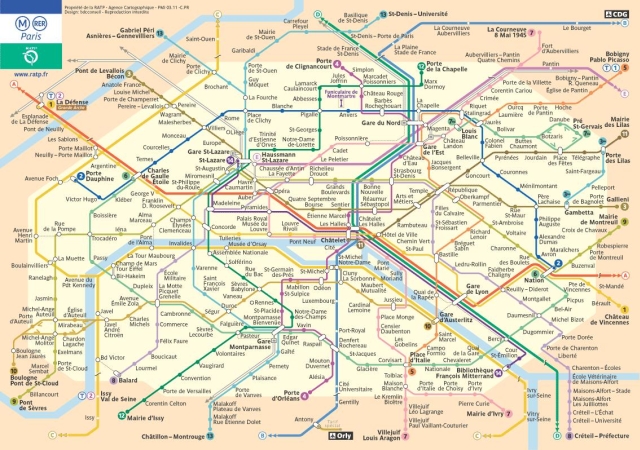 Seoul: Rated the best in the world. Clean, efficient, dependable despite size, complexity and massive use. Daily ridership, 9.8 million and annual ridership a staggering 3,589,000,000., according to wikipedia.org (en.wikipedia.org...-1).

Chicago: Chicago has sub, surface, and elevated rail lines. In the literature of the system, it's all "rail". It is hard to get a definitive outline of the "subway". The Chicago transit system is what it is. Having the "el" running past your seedy hotel room window, like in the movies, might be atmospheric, but possibly grating too. Is this system a muddle, or a beloved workhorse? Maybe both. Maybe there is nothing wrong with that. Maybe one of Toronto's problems has been fear of not being seen as the brightest kid in the class. Maybe this has stunted the TTC's growth, while the CTA just barged ahead? With vigor!

In the 1960s, the design for subways and transit in Chicago looked like this: Torontonians take note. Does this look vaguely familiar? 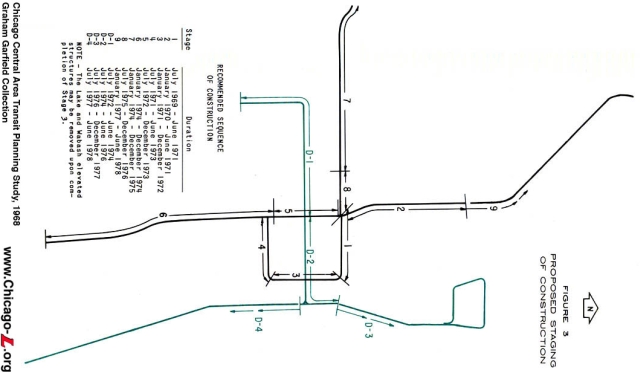 This should refresh the memory, if it needs it. Toronto: Not in 1968! This is now and includes uncompleted extensions. 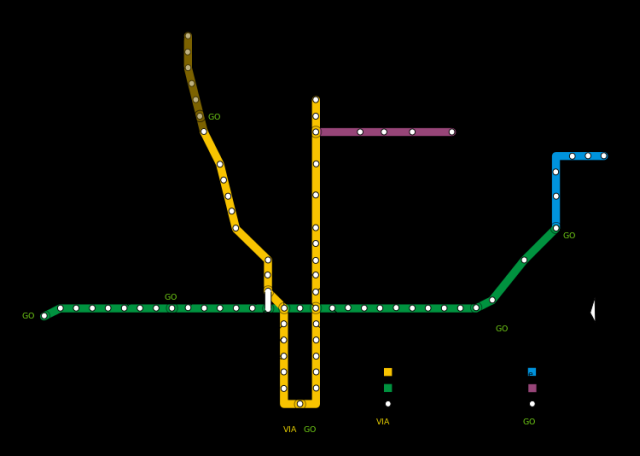 Lastly, Beijing: Incongruously simple for a city of 12,000,000 (at least), probably due to issues related to planning and priorities in the Chinese command economy and to the fact that for the aforementioned reasons it is a system in its infancy. A design (and situation?) not unlike that of Toronto, he writes without a trace of facetiousness. 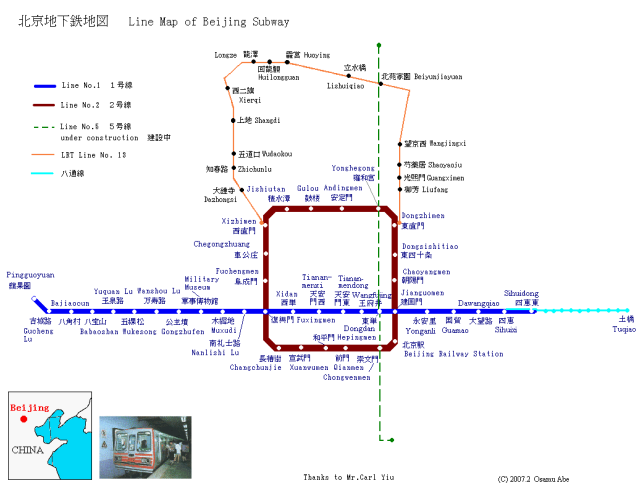 Subway issues and subway comparisons are a can of worms. Apples to apples comparisons between cities are extremely rare. The maps tell the tale. One notices, however, the similarity of the subway plans for Toronto and the original Chicago plan. They are markedly similar. Toronto's plan seems frozen in its tracks, while Chicago barged and bulled its way forward. (Barging and bulling is "American" for the British "muddling".)

I would be unjust and unfair to say that Toronto never had a good idea though.

People, candidates and voters alike, need to read this article. Transit pundits will know all about this but what intrigued me was not that there is a lost subway station in Toronto, but how this station linked to lines in the city and formed a part of an interlinear system.

The scheme, known as interlining, meant riders could catch a train at, say, Greenwood and get downtown via Union without changing. The same system applied to eastbound trains. Riders could get on at Dundas West and get off at Eglinton without switching at St. George, Spadina or Yonge. Lower Bay enabled two separate routes to pass through the Yorkville station without having to share platform space.

This kind of line intersection causes the "self sortation" of passengers to occur at the end of and along lines, where they board, rather than at central junctions, clogged with passengers from the entire line, trying to change trains at once. 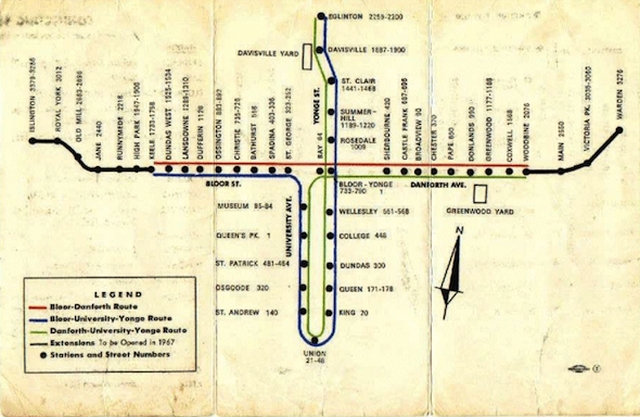 This idea was dropped after a few months.

Interestingly, a customer survey conducted at the time found those in favor and those against interlining were matched for numbers. Most simply didn't care one way or the other.

After just six months, the TTC decided to can interlining and stick with fully separate Yonge-University and Bloor-Danforth lines. The arrival of the Spadina line meant the second platform at St. George remained vital while Lower Bay was bricked up and abandoned when trains stopped passing through.

Strictly speaking from the point of view of subway design, it seems to me that the choices are between building interlinear junctions where junctions presently occur in the system, allowing for trains to sort passengers when they get on the trains as opposed to when they reach the junctions, . . . or building a ring line in the core of the city that will enable connections to all lines crossing the city by means of layered tracks connected by escalators, stairs, etc.

Ultimately, it is likely that both of these approaches will be used in future, depending on particular circumstances.

Unfortunately this issue of planning how to improve the transit system is not one issue but two overlapping issues, the second one being the political one of who gets to reward political backers with the lucrative contracts that will be spawned out of improving the transit system. We get into "gubmint" here. We get into "profiting from poor planning". This is the sort of situation that brings out the carnival shell game manipulatory instincts of your typical politician.

posted on Jul, 14 2014 @ 02:01 PM
link
TO's transit system is total crap. I hate going into the city. This won't impact the mayoral race though. That one's in the bag. It was over when Chow entered the race.

posted on Jul, 14 2014 @ 02:10 PM
link
I think some big changes will come when places like Mississauga perhaps even Oakville and Pickering decide to pitch in and help with these line extensions...seeing as they are the ones who would seriously benefit. Commercial and residential alike. Yes the GO service has stepped it up. But indeed more is needed. Maybe just call Oshawa to Hamilton, "Toronto"... Sure would give a better tax bracket to pull from.

I dunno about that. Chow is a different kind of scary than Ford. Equally scary...and useless... Like all politicians.

posted on Jul, 14 2014 @ 02:22 PM
link
a reply to: intrepid
I think Chow represents "gubmint" (political patronage) in all of this. In my thread about her, Olivia Chow: Thin Edge of the Liberal Wedge in Toronto?, I discussed this point.

I don't think her supporters really know her.

I think she is a Liberal candidate operating under NDP cover. She blew it badly though during the provincial election when she showed her true turncoat colors by not campaigning for the NDP.

Oakville won't jump in on it till they have merged with Milton.

The way I see it. Toronto just isn't THAT busy to need branches all over the place. Majority of the workers are within' walking distance from either Union or existing subway stop, or drive like pretty much everyone else in Central Ontario.

If they were to make a viable subway line they would just need to extend the lines a bit, make one to Pearson, and just have more frequent trains. People tend to forget that Toronto has the Downtown, Financial, and then ... the rest. And the rest are just local shops, smaller businesses, etc where people live within' walking distance anyways, and the financial or downtown 80% of the workers come from GO train or drive in.
And to top it all off, has anyone seen Toronto between the hours of 3-5 AM? It's dead, subways are vacant, GO station isn't even open, hardly any cars on the road, it's a very unique city.

posted on Jul, 14 2014 @ 02:44 PM
link
Biggest troll ever. Comparing huge cities with many transit stops with Canadian tiny city. Just because the map looks like crap it doesn't mean it should have that many stops on them. This is why huge cities are confusing like New york or Montreal with its transit map. Toronto is actually tiny for a city. The less stopping there are the faster you get there. There are buses for a reason.

Toronto is the 5th biggest city in North America. And it's much larger than Montreal, in population and land size. Montreals Metro is good for it's size, but sort of limited. Toronto just needs to be tweaked.

originally posted by: makemap
Biggest troll ever. Comparing huge cities with many transit stops with Canadian tiny city. Just because the map looks like crap it doesn't mean it should have that many stops on them. This is why huge cities are confusing like New york or Montreal with its transit map. Toronto is actually tiny for a city. The less stopping there are the faster you get there. There are buses for a reason.

The metropolitan area of Toronto has more than 5 million people in it. It's not tiny. It's very large. What's more, the city's transit system is buckling under the loads it has to carry. There is not one candidate in this election who disagrees with this.

Beyond those indisputable facts, the city is growing in population and in demand for transit. Everybody, but you apparently, realizes this.

Toronto is the 5th biggest city in North America. And it's much larger than Montreal, in population and land size. Montreals Metro is good for it's size, but sort of limited. Toronto just needs to be tweaked.

One of the "tweaks" that might be done to provide immediate relief in the downtown core would be to demothball the lost station(s) and initiate the interlinear subway system spoken about in my OP.

This idea was undoubtedly understood by its originators but its import seems to have been forgotten. At the time, traffic on the system probably didn't justify the maneuver. In that sense the idea was ahead of its time. Maybe its time has come.
edit on 14-7-2014 by ipsedixit because: (no reason given)

posted on Aug, 4 2014 @ 04:31 AM
link
Just a little bit of housekeeping here. I want to apologize to my readers. The incongruity of the Beijing subway map above is explained. The map is way out of date. Here is the current version: 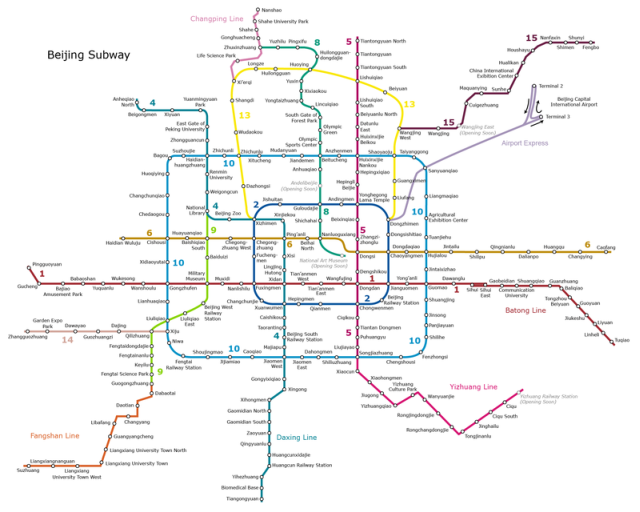 I was surprised by the first map, but I didn't do the diligence to correct the error.
edit on 4-8-2014 by ipsedixit because: (no reason given)