posted on Jul, 14 2014 @ 04:26 AM
link
I am sooooo mad! There's no money to support the sick, disabled, disadvantaged and elderly properly but there's always money to be found for the military industrial complex' welfare.


Details of £1.1bn worth of defence spending are to be unveiled by the prime minister later.

It is due to include cash for drones, UK special forces and intelligence gathering to tackle global terrorism.

David Cameron is due to make the announcement at the Farnborough International Air Show.

He is expected to say funds for "vital" Ministry of Defence programmes have been found as a result of austerity measures.

Oh, Dave....so we've saved £1.1 BILLION so we're going to spend it on the military are we? When the majority of the people want our troops home?


But writing in the Daily Telegraph, the prime minister said the government had been fixing the "mess" left by the previous government.

And pointing to how "the threats we face have changed utterly in 30 years", he said the UK "cannot defend the realm from the white cliffs of Dover".

He said it was a "national necessity" to have "modern, technological, advanced and flexible armed forces" to advance British interests.

No wonder they've got water cannons in London ready for the demonstrations they envisage coming.......and they know exactly why!

I can't give rainbows to this
Jane

What would your defence plan be for the UK………??

Grow a Big Hedge / Shrubbery around the coastline…………!

Hedges?
Please......I highlighted the PM's rhetoric.....this is not all geared up for defence, I have absolutely no problem with DEFENDING our country......may I suggest you read the OP again, and possibly the whole article in the link I provided.

posted on Jul, 14 2014 @ 04:48 AM
link
Maybe they should spend it on flood defences or a How to deal with a half inch of snow for idiots booklet for all. Maybe it's for all those planes and support vessels for the new aircraft carrier...oh hold on, they havn't even been built yet.

posted on Jul, 14 2014 @ 05:04 AM
link
funny, most British on this board complain that the government stripped the navy and armed forces.

1.1Billion in the scheme of things isn't a lot of money, in terms of debt and gdp. But for the military, especially for drones and special forces its a hell of a lot, compared to other nations that would spend billions on a single fighter plane.

with everything happening in the ME at the moment, seems a good time to prepare some defenses.

posted on Jul, 14 2014 @ 05:10 AM
link
Mmmm... that "global terrorism" again. So that's why we need nuclear missiles and aircraft carriers!
There again, we obviously don't need the carriers as we haven't needed them for a long time and don't have any aircraft to fly off them anyway... until the F-35 appears, and only then if it isn't raining and there are no clouds about.

Intelligence gathering? Like they don't already have enough in place to spy on us all 24x7?

All government spend these days is primarily about jobs for the boys and enriching large party donors. The needs of the people are always secondary to making a buck for the boys at the club. Of course, they need to keep up the booga booga and invent or even create and arm enemies, to keep the flow of tax payer money flowing into the coffers of the MIC. If peace broke out, there would be financial collapse. Not for the ordinary man in the street of course, but for the bankers and corporations, so death and destruction is needed in order keep the money flowing to the right places. Isn't that what all wars are ultimately about? Rich old guys creating wars that others have to fight, so they can get richer? Was the reason for WW1, WW2 and will be the reason for WW3 as well.

At last.....somebody who gets it!
Well I guess a thread like this would attract all the detractors, p*** takers and comedians initially, threads like this always do.
Thank you BritGuy.

As I said, I have no problem with DEFENDING our country, and especially making sure our ground troops in particular have the right equipment. But as I pointed out, Davey boy said "advance British interests"....and you nailed that on the head BG. 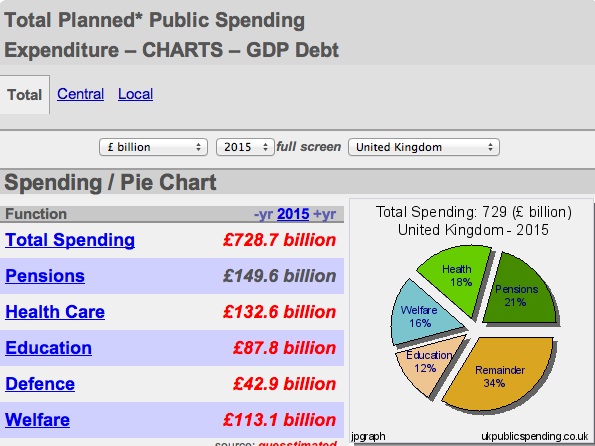 There are BIGGER problems than the money spent on defence…….

and without wanting to make this political……. the previous 'WasteMinster' lot (i like that) have left a HUGE £60 BILLION to be paid back for the new hospitals 'they' built……? Smoke and mirrors and dis-information……get facts first then criticise………..

posted on Jul, 14 2014 @ 06:27 AM
link
a reply to: PurpleDog UK
Thank you, I appreciate your response.
Can you give me a link to your chart please?
Rainbows
Jane

posted on Jul, 14 2014 @ 07:38 AM
link
They should really rename "Defence" to "offence", due to the fact that we are not being attacked by anyone but are, in fact, attacking others.... cos the US says we must and if we don't the terrorists will win!

The charts showing government spending don't really tell the whole story though, of corruption, incompetence and downright criminal activity as more and more corporations are sold essential services... for private profit!
Cut the waste, corruption and tell some of those big banks we owe money to, to simply piss off. They can go ask the previous corrupt governments for the money instead of getting to rip off the people. As long as the current system of government prevails, and it's behind the scenes handlers keep control, then we will see nothing but more misery and outright theft from the people.
I see already, bit by bit, the NHS is having sectors privatised. Virgin Care being one of the up and coming stars! I mean, seriously, WTF? For profit corporations getting to determine who should and should not get treatment is not far behind, so whether you live or die will depend on a spreadsheet and a bean counters determination of whether they can squeeze a bit more money from you.

originally posted by: angelchemuel
a reply to: PurpleDog UK
Thank you, I appreciate your response.
Can you give me a link to your chart please?
Rainbows
Jane

Here is the Link to that data…

What would your defence plan be for the UK………??

Grow a Big Hedge / Shrubbery around the coastline…………!


You'd never get planning permission ... all the residents would complain about losing their panoramic views and the market value of their homes.

Britain has been constantly cutting back on defense spending on their troops for decades; some army wives were in tears when they saw the homes that they had moved into had mold and cracks in the walls. There's less than 10,000 full time soldiers now, and they have more horses than tanks.

Though it is believed that drones will replace the need for piloted vehicles. The only reason this wasn't done before was because the top brass wouldn't allow it.

Most of it going to GCHQ. More toys for the boys.

I guess this is being done while they are also doing this www.theguardian.com...

Just to keep things "above board".

I suppose TPTB could possibly site Scotland as the cause for this new spending should she become independent, border patrols and all that jazz! LoL

That's funny, i thought 'austerity measures' were to get us out of debt, not buy new murder toys...ah well, it's only peoples jobs, dignity, marriages, families, homes, futures and very lives we're talking about...hardly worth mentioning really.