Bronze Age Settlements Ringed With The Skulls Of Children

posted on Jul, 14 2014 @ 04:15 AM
link
Read a few articles about this tonight and I thought it was interesting and a bit macabre. First an excerpt from the first article I read at Live Science, followed by additional information I was able to dig up.

Children's skulls found at the edges of Bronze Age settlements may have been a gruesome gift for the local lake gods.

The children's skulls were discovered encircling the perimeter of ancient villages around lakes in Switzerland and Germany. Some had suffered ax blows and other head traumas.

Though the children probably weren't human sacrifices killed to appease the gods, they may have been offered after death as gifts to ward off flooding, said study co-author Benjamin Jennings, an archaeologist at Basel University in Switzerland

Since the 1920s, archaeologists have known that ancient villages dotted Alpine lakes in Switzerland and Germany. However, it wasn't until the 1970s and 1980s that many of the sites were excavated, yielding hunting tools, animal bones, ceramics, jewelry, watchtowers, gates and more than 160 dwellings. Tree rings on wooden artifacts from the sites suggest people lived there at different periods between 3,800 and 2,600 years ago.

The researchers' hypothesis sounds reasonable considering the placement of the skulls and what's known about the occupants of the settlements, but I'd be interested in hearing other possible interpretations. It's believed that the children likely died in war because the non-uniform nature of the wounds indicates something other than a ritual sacrifice and examinations of teeth and skeletal remains did not reveal any signs of illness that would have potentially led to euthanasia. This also seems highly speculative.

A particularly interesting detail is that the skulls and other remains are believed to have been disinterred some time after the initial burial and placed along the palisades at a later date, presumably as a result of changing water levels. I didn't come across anything that explains in detail how researchers came to the conclusion that these remains had been previously buried, but if that's the case, it would support the notion that these weren't ritual sacrifices.

3,800 to 2,600 years ago is a fairly large span of time and no specific culture or locations were named in the above source but looking at the abstract of the source paper, published in Antiquity, the sites are in the Circum-Alpine region. Here's a reconstruction of a late bronze age lake dwelling from a University of Basel page for one of the projects doing research at these lakeside settlements, including Lake Federsee in Germany and Lake Nussbaum in Switzerland. 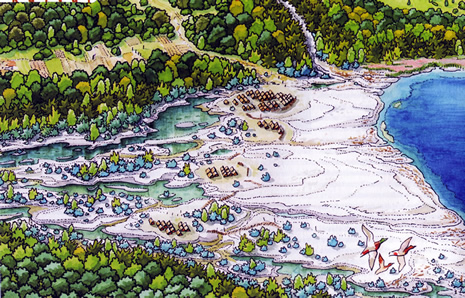 There is a museum at Lake Federsee (a UNESCO World Heritage site) and the Federsee Museum website has quite a few pictures of artifacts and reconstruction of pile-dwellings. While I was looking through the site for more information about the lake dwellers, I hit the jackpot and found a picture of two of these childrens' skulls:

The caption for the picture reads "Two children from the skull 'Wasserburg Buchau' (ritual murder?), 1000 BC." This led me to the Wikipedia page for Wasserburg Buchau and the following information about these skulls:

Between 1920 and 1938, were here during the first excavation the skulls of six individuals, five children and adolescents and a woman discovered at regular intervals along the palisade, which, contrary to the established practice of the urnfield culture had not been burned. Injuries to the two skulls obtained suggest that these, taught intentionally and in an elevated position with a blunt or semi-sharp instrument, such as a stick or a hoe and the skull were then deposited at regular intervals. Meanwhile, one takes for a new investigation in 1998 that it was possibly here to cultic or magical ritual acts motivated about deterrence or protection, for which the composition of the group calls. [2] In fact, to be found in the later Bronze Age documents, such as in the Swabian and Franconian Alb, that human sacrifices were common, typically prevail above all remains of women, children and young people in the present case as well.

So it seems the skulls are believed to be from the Urnsfield culture a late bronze age people named for their funerary customs, consisting of cremation followed by placing of the ashes in urns and burying the urns in fields. Given this information, I'm wondering if the University of Basel researchers are correct after all. If the common funerary practice was to cremate the dead, why weren't these individuals also cremated?

Journal Article, Gifts for the Gods, Univeristy of Basel
Newser
Archaeological Institute of America - Archaeology
Ancient Origins
Discovery News
edit on 2014-7-14 by theantediluvian because: (no reason given)

posted on Jul, 14 2014 @ 04:29 AM
link
First off, the trauma to the skulls could simply have been accidental, it is an assumption that it was otherwise.

The location could simply be where children were buried. Anything is possible such as near the parents dwelling. Many cultures dealt with children's remains differently than adults.

There are hundreds of plausible explanations.

posted on Jul, 14 2014 @ 05:18 AM
link
We find a lot of skeletons, or partial skeletons, buried in the banks around Bronze Age settlements and hill forts. It seems to have been a thing.

Unusual for these to have been exclusively children. But the practice itself is quite common.

Of course nobody knows why they did it, but 'ritual' seems likely.

When reading this Easter Island with its faces looking out come into my mind. I wonder if there is a link in psychology between these differing peoples?

I didn't catch any information as to if they all died at the same time. Given they didn't burn them, they were likely not the same culture that's suspected to have been there.

Simplest explanation would be that they did not die at the same time and that maybe this was sort of a traditional way to honor their children in death. It may have been as practical as a children's cemetery that may have doubled (as the OP states) as an appeasement to nature.

posted on Jul, 14 2014 @ 04:26 PM
link
Has anybody thought that maybe this family unit/tribe might have been the twisted bunch that you don't want to live next to?
Maybe a badass gang moved in, killed everyone, raided everywhere around, nicked kids from surrounding areas, made them do whatever they made them do then killed them and stuck them around the place to let everyone know they were truly badass?

Maybe they used them for target practice?

All viable options when people are involved... Not everything was a ritual back then. There was bad people too you know