Three big reasons war is going away: Fact or Propaganda?

I was headed over to YouTube and this video caught my eye. I wondered how ATS felt about this videos statement and whether it comes at an opportune time to downplay the Mideast violence. It's all BS...

“War” is a fuzzy category, shading from global conflagrations to neighborhood turf battles, so the organizations that track the frequency and damage of war over time need a precise yardstick. A common definition picks out armed conflicts that cause at least 1,000 battle deaths in a year — soldiers and civilians killed by war violence, excluding the difficult-to-quantify indirect deaths resulting from hunger and disease. “Interstate wars” are those fought between national armies and have historically been the deadliest.


War has evolved to work quietly behind the scenes. Unless one is fighting, defending or reporting live, the only view we get of the situation is through television programming. 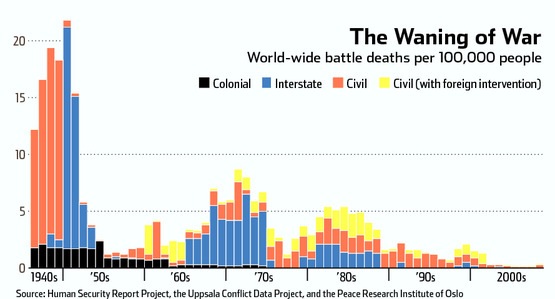 Lately I haven't understood much. Too much to focus on and not enough resources or time to make sense of any one thing. Obviosly I speak for myself but war may seem to be declining, simply based on the fact that our lives are getting busier and we only know what we allow ourselves to absorb in a days time. At 1000 battle deaths a year, one can see we are already at war all over the world and it looks like being patriotic these days labels you as a terrorist. 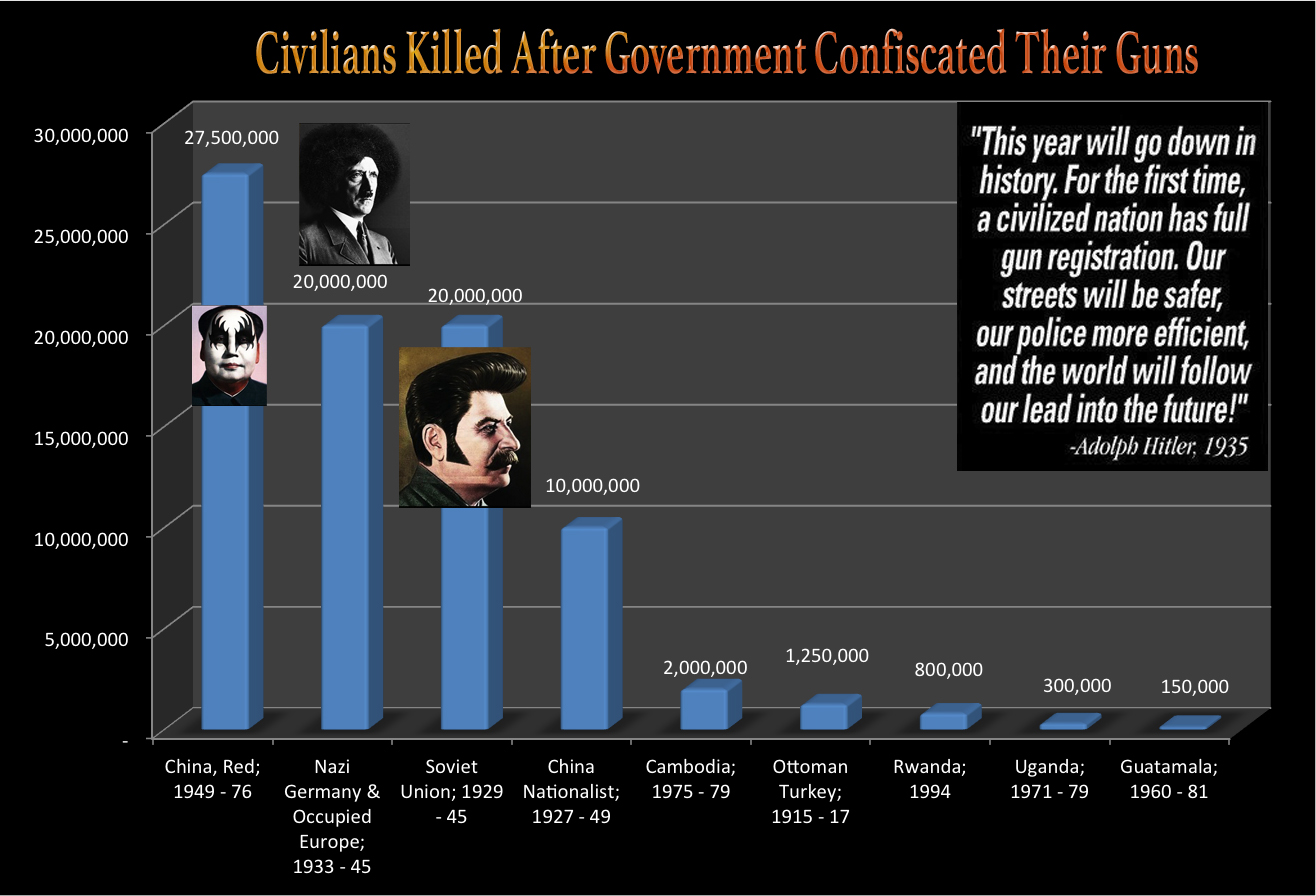 They took the appearance of large wars away and spread them smaller and thinner around the entire country. Why beat money out of other nations when you can beat your own citizens. Much more manageable.

Democide is a term revived and redefined by the political scientist R. J. Rummel as "the murder of any person or people by their government, including genocide, politicide and mass murder." Rummel created the term as an extended concept to include forms of government murder that are not covered by the term [genocide], and it has become accepted among other scholars. According to Rummel, democide passed war as the leading cause of non-natural death in the 20th century.

His research shows that the death toll from democide is far greater than the death toll from war. After studying over 8,000 reports of government-caused deaths, Rummel estimates that there have been 262 million victims of democide in the last century. According to his figures, six times as many people have died from the actions of people working for governments than have died in battle. 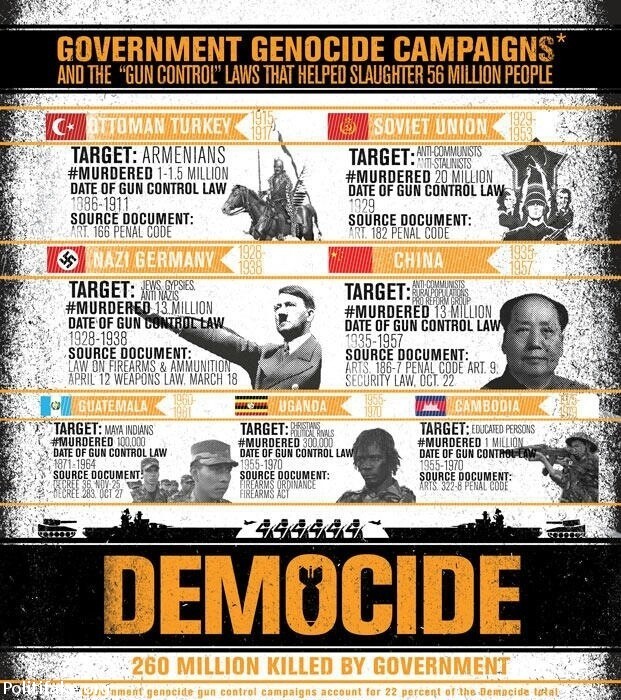 posted on Jul, 12 2014 @ 09:38 PM
link
I say democracies should elect leaders that are real bad asses. If an international conflict can't be settled diplomatically, let the leaders settle it man to man. Leave the people out of the melee. I think Putin would beat Obama silly in the ring.
I vote Camacho.

posted on Jul, 12 2014 @ 09:48 PM
link
There is not war nowadays.
War requires opposing forces.
What we see nowadays is outright murder.
Isn't the UN supposed to control things like this?
Failure, defund the UN.

War is what funds the corrupt governments in power in todays society.

I would call this propaganda or flat out nonsense.

posted on Jul, 12 2014 @ 09:56 PM
link
Another possible reason why wars are in decline is the fact that nearly every modern piece of technology can be used for survallieance, not to mention drones, satellites, sub-orbital aircraft, etc make it very difficult for any country to prepare and perform maneuvers without being seen.

Probably the most important reason why wars are in decline is because the secret government(s) have the ability to somehow see into the future. This may sound like science fiction, but circumstantial evidence points in that direction. As long as the power elite have sensors everywhere, feed the data from the sensors into time machines, they will be able to predict any and all maneuvers. Even if all the sensors on the ground are jammed or somehow blinded, sensors mounted on air and space vehicles will be very difficult to circumvent.

Despite this I do agree with seeker1963, wars are very profitable and they reduce the population (these are one of the goals of some secret societies) , so wars in the future may be engineered and tightly controlled. Not to mention that with all the surveillance and time machines, special forces can be sent out to neutralize groups before they gain the ability to pose a threat. Also, like one of the previous posters have said, the media also plays a role in publicizing a war, how could the general public, historians, or the like know that there is a war going on if it is never or rarely publicized?

There probably are many secret operations that have never been publicized, so how certain can we be that the data presented in the video is accurate?
edit on 12-7-2014 by deloprator20000 because: (no reason given)

In contrast to the wars of past, the intricate aspect of war itself has changed with the times. So much so, that today, we no longer fight 'old wars', but 'new wars'. As explained in Wikipedia:

New wars describe international or civil wars of low-intensity conflict that involve myriad transnational connections so that the distinctions between internal and external, aggression and repression, local and global are difficult to sustain. The term is an antonym of conventional warfare whereupon conventional military weapons and battlefield tactics are no longer used between two or more states in open confrontation.

A key thinker in New Wars theory is Mary Kaldor who explained how globalisation has made three changes to war; it is based on claiming identity, not territory, guerrilla or terror tactics are used and international crime has changed how wars are funded. An example of the theory is the Bosnian War.

2. Nuclear Deterrence. Mixed results. Holding the line in Korea with no progress either way. Where nuclear depleted rounds used in Iraq to mask mini nuke? See how Israel and Iran goes with the issue for now.

posted on Jul, 13 2014 @ 01:38 AM
link
It would be nice to see this timeline expanded to maybe the 18th century. At this time I believe there is just as much conflict yet not as many casualties due to technology and the way fighting is done. The weapons we have can wipe out millions in a flash so with that power comes a greater responsibility.

originally posted by: skunkape23
I say democracies should elect leaders that are real bad asses. If an international conflict can't be settled diplomatically, let the leaders settle it man to man. Leave the people out of the melee. I think Putin would beat Obama silly in the ring.
I vote Camacho. 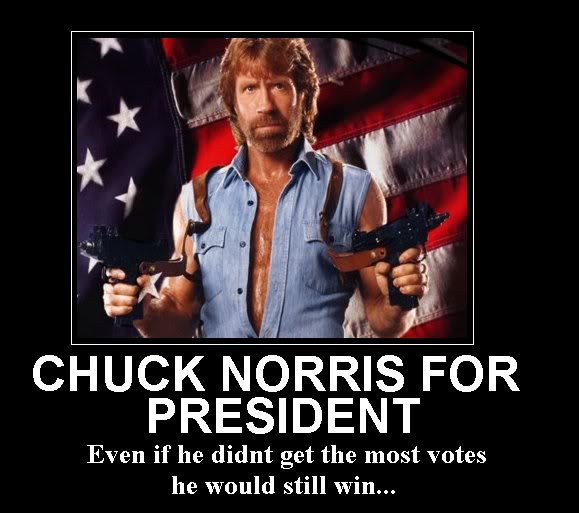 Politicians wouldn't lie or Chuck would cut you down and the economy would get it's ass kicked back into shape.