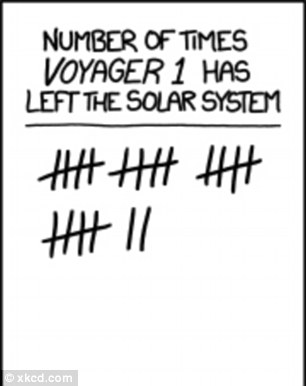 This is what the Sun looks like from Voyager's perspective:

Can you see it? It's the tiny dot just above this sentence.

We are expected to have faith (believe) that CMEs on the Sun are responsible for the perturbations of plasma observed by the Voyager spacecraft.

edit on 7/9/2014 by AnarchoCapitalist because: (no reason given)

posted on Jul, 9 2014 @ 01:05 PM
link
Well, sounds like the science was chasing it's tale again. Consensus of the time. I know without any real evidence to back a theory if is hard to make a correct theory. Now that they have some new real evidence, maybe they will admit they were wrong and look at other theories...that would be the scientific way of doing it. We'll just have to wait to see what happens.

I look at the heliosphere as a sort of surface tension that forms away from an energy source, sort of like the field around a high voltage power line. In a power line, the energy is carried outside the wire in an energy barrier. Now the interaction of the suns energy with the energy of the solar wind could create a bunch of different fields, maybe even with some magnetic properties. The planets could be stationed with respect to their interaction with the field and the sun, bobbing around in an orbit which is an energy barrier itself.

Since they have got satelites around the sun to observe it and satellites in the heliosphere region maybe they will find out what is really happening. Something isn't real unless you prove it real is the present philosophy, but once real evidence shows an existing theory is not feasible, they should examine other theories. They don't do that lots of time though, because it would jeopardize funding for the sciences because it shows well known teachings of science were wrong. It will take fifty years of slow evolution to change this, a couple of generations to slowly reacclimate. Us old people who remember what they used to teach need to be disregarded as having Alzheimer disease since we are remembering science wrong, we remember what they used to teach.

Well look at nature, look at an egg. It is a complex structure. These fields are in nature all over the place, we just need to open our eyes. You have to look at the whole picture. It is nice to know what is going on out there but is it important really? I would rather learn how to grow veggies or chickens myself, from my point of perspective that is more important. Maybe to a person who derives their income off of space exploration so they can buy their food already prepared it is important to get people to fund their projects, but I don't really need to know this.

Point of perspective is important, most people want to believe their job is important. I do believe some people's jobs are important, like the garbage man and the people growing and processing our food. The people plowing our roads have important jobs also. A plumber is important, so is a factory worker making things we really need...as long as they build good products.

I know, I am treating this like a rant thread. I just want people to understand what is really important to us. Family and friends also very important. We also need something to do.

I'm not sure why it surprises you that science is continuing to find evidence that further confirms announcements, findings, and theories. That's simply what science does -- it continually checks itself.

originally posted by: Soylent Green Is People
I'm not sure why it surprises you that science is continuing to find evidence that further confirms announcements, findings, and theories. That's simply what science does -- it continually checks itself.

"Voyager 1 may be months or years from leaving the solar system—we just don't know," says APL's Stamatios Krimigis, principal investigator for Voyager's Low-Energy Charged Particle (LECP) instrument.
...
On Aug. 25, 2012, when Voyager 1 was about 11 billion miles (18 billion kilometers) from the Sun, the spacecraft reached the so-called magnetic highway where charged particles from inside the heliosphere zoomed out along the magnetic field as cosmic rays from far outside zoomed in. The lack of a detectable change in the direction of that magnetic field, however, convinced scientists that Voyager remained within the Sun's influence.

They aren't finding evidence that confirms their theories, they are changing their theories as the evidence refutes them on a regular basis. This is not science.

Don't these latest observations of the plasma density surrounding the spacecraft (which are now able to be detected by the effect the CMEs had on the plasma) now indicate to them that Voyager is outside the heliosphere?

In September 2013 it was announced it had probably made it into interstellar space, but Nasa couldn't be 100 per cent sure

Your inability to understand what you read may be why you hold the beliefs you hold.
edit on 10-7-2014 by OccamsRazor04 because: (no reason given)

posted on Jul, 10 2014 @ 01:02 PM
link
they are changing their theories as they see more and more evidence... and this is not science? interesting statement...

originally posted by: ErosA433
they are changing their theories as they see more and more evidence... and this is not science? interesting statement...

The proper method of scientific inquiry involves questioning all assumptions a theory is predicated on when experimental data refutes existing theory. This never happens. Ever.

So now you are changing goalposts, very common for your ilk.

Initially they were "wrong" before and admit it, but say they got it right this time. I prove that they are NOT saying they were wrong, and are offering more evidence that proves their initial statement was RIGHT ...

So you jump ship and claim they are wrong either way. Awesome stuff.

How are they changing goal posts when I proved they are saying they were right before, and the goalpost is exactly where they thought it was?

Seriously , stop before you embarrass yourself more.