posted on Jul, 6 2014 @ 09:50 AM
link
I thought doing the internet research was a good idea. Spent some time looking into reviews from gun magazines and found their choice was the Springield XDS. So then I decided to venture out to the gun store to see what they felt like. I checked the springfield and was disappointed in how uncomfortable it felt. Trigger pull was clunky for lack of a better term. It felt like a toy.

Then on the the Glock 30. To fat. and almost the same trigger pull as the XDS. So now I was disenchanted. Are all sub compacts going to have this uncomfortable feeling? The nice lady at the gun shop showed me a Kimber ultra carry. I wish she hadn't have done that. Bumped up my price range by a good bit. It felt perfect. Just like my 1911. But smaller and lighter.

Are there any other large caliber compacts that you like, and why?

Thanks for taking the time to read this.

I think the biggest draw back to a sub compact .45 is recoil. We're talking a small gun and a large caliber, so control is a issue. I know, I know but, but, it's a .45!! It's a legendary man stopper! Well, honestly bullet placement is as important as size. An Uzi won't save you if you can't hit what you're aiming at. I'm not disparaging your skills, just saying in general. I have a Glock 19 Gen 4. It's small, easily concealable,15 rounds and very quick to get back on target. I can fast draw/double tap right out of the holster and place both within 2 inches. I know there were some issues with the Glock's recoil spring assembly, but they've got that straightened out. Maybe you could look at .40s, but you're still looking at a snappy round from a small gun. If you have blocky hands like mine, the sub compacts just don't feel comfortable. It's like I just can't get the grip I want and my pinky dangles out there, squirming around, looking for something to hang on to. Mag extensions add length, so they can also add to concealment issues.
Take a look at this and see what you think,
www.springfield-armory.com...

I love my commander, its probably a bit bulkier than most like but rarely have I found a gun that fits my hand so well.

It works for me at least.

Depends on your budget and carry method. For me I like to carry more bullets that I can place better shots with than less bigger bullets. As long that you are carrying modern defensive ammo then 9mm should be okay. My current summer carry is a Sig 938 (good ccw pistol if you like 1911). If I have to carry only ball ammo then I would default to my S&W eseries 1911sc.


There is a huge market for the pocket pistol right now. The rate of ccw applications has been exploding over the last few years. Companies have been rushing production on compact pistols, in doing so, they have overlooked details that are paramount in defensive carry weapons.

Trigger pull, the length thereof, has been an area completely ignored by the manufacturer. Everyone from Smith and Wesson to Ruger.

I purchased a Ruger LCP for my wife. While it functions excellently, the slide has a heavy draw, the trigger has a longer pull, but nothing unmanageable by my wife. Other pocket pistols did not fair very well comparatively.

In the larger caliber market, above .40 S & W, these problems are intolerable.

Recently I decided to pick up a Rhino 60DS revolver for open carry. Probably gonna continue to open carry that beast until I either settle for a .380-9mm pocket pistol, or they make .40-.45 cal semiautomatic compacts that are worth my money.

The NEW Glock30sf...is a thinner, smaller 45. Almost like not carrying anything. Check it out.

posted on Jul, 6 2014 @ 11:01 AM
link
Employing a pistol in low light and a hurry is more a function of how quick it can be pulled, aimed and how well aimed. This requires practice. The more types of guns one owns for different situations the less likely to be on target in panic mode when the time comes.

Buy the gun you most want to carry. 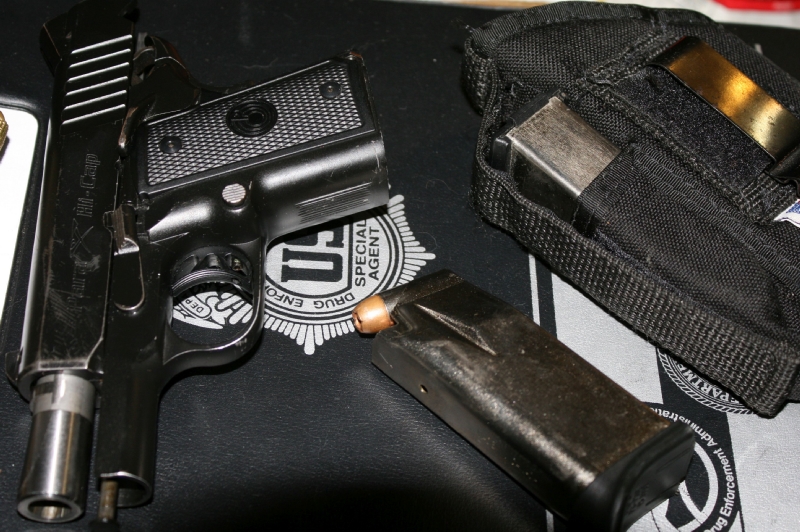 Have you had any reliability issues with yours?

I have had and carried it for YEARS.. Qualifying and even some light competition with it and it has NEVER malfunctioned even once..

Only pistol of the many I own that I can say that about.. Even my high dollar Sig has had feed issues..

That should be cheaper then the other options out there. I have not personally checked out one of these but the p15 i have, has a nice smooth trigger pull.

I carried an xds for awhile and loved it. I ended up trying out at .380 Bersa Thunder which I absolutely love. I know alot of people are small caliber haters, and to each their own. It is a little bigger .380 given its 3 inch barrel, but very reliable at 25 yds. Again like alot of the smaller calibers, it has a long trigger pull. Its mainly a put it in their ear and pull the trigger gun, but on the range has proven it has the accuracy if ever needed. Glock just came out with a .380 that I want to get my hands on. Goodluck though finding what feels best for you.

posted on Jul, 6 2014 @ 11:44 AM
link
I like the Kimber UltraCarry. Mainly because the models offered come in various size grips so you find what you are comfortable with. Only had one jam and that was when I first bought it. Not lubed/broke in enough.

It is a pricey piece though.

check out the colt mustang. and stay away from the diamond back .380. thats currently my pocket piece and BAHGHHG it sucks. I'm nervous when i carry it. i keep her clean and good to go and on several occasions il just stop by the woods and quick pull her out and go rehearsing and il get 1 or 2 and JAM. ez enough to clear but she does it a lot. I've tried a couple different ammo companies too.

as for the .45 i too have a commander. awesome winter carry gun. kinda big but it brings all the benefits of a bigger gun. damn near accurate at 100 yards with power to spare. lightish recoil and minimal wrist torsion from the shorter barrel. only jammed on me once or twice too very great reliable what i call a "chevy truck" of a gun. she will getcha there!

the kimber ultra carry sure is pretty and I've only got too shoot her once but she was pretty nice. a bit more explosive then id dream of i guess but she was pretty well contained and shot very well. if i ever find a gold bar in the streets i reckon il buy one lol!

a buddy of mine has a doubletap defense titanium .45 pocket pea shooter that I'm just in love with. probably going to be my next firearm purchase. check em out if your lookin for ultra small.

So...what do you think of the replies so far?

If you have the opportunity, go to a local dealer/range and take a couple for a test drive. Beats spending a crap-load of cash for something you are not happy with.

My wife had the same problem with her Taurus Millennium PT111 (the jams), and it wound up being the result of what's called 'limp-wristing', or not holding the wrist rigid enough for the high recoil of the small mass of the pistol being moved by the large force of the powder charge going off.

Regarding the OP's complaint of hard trigger pulls, that is for safety (light triggers are easier to AD), and mandated by law in some states to not be below a certain amount.

o i know all about limp wristing. a colt commander 1911 will do it to you quicker then anything I've ever shot. the diamond back .380 has an edge that catches the casing as it goes by. sometimes it makes it but sometimes it doesn't. I've managed 2 mags straight without a jam and another time i went 3 single shots in a row.


all in all she isnt bad for $420 but the trigger pull/travel and jamming/double feeding are enough to make me start saving the pennies again for a new one.