"that makes him anti Christ." Lol.

Anyway, I'm pretty sure this is how the Catholic church has always felt.
edit on 5-7-2014 by WakeUpBeer because: (no reason given)

masqua
+26 more
posted on Jul, 5 2014 @ 07:55 AM
link
There's a fine distinction between living our lives according to the lessons of the Sermon on the Mount and trying to live as if we are equal to the Christ.

To accept the ethics and morals as Jesus taught them is admirable and difficult.

To presume a personal relationship is easier but dangerous. The mindset creates a feeling of superiority over others and from that false notion comes the judgement and condemnation of others.

Could it make you rebel?

originally posted by: Wifibrains
Keepin it on wax.... Why is the church scared of people having "personal relationships with Christ"...

If they did that they may make decisions themselves, without those decisions being approved by the church of Rome

originally posted by: Wifibrains
Could it make you rebel? Against what?

The authoritative church ofc.
edit on 5-7-2014 by WakeUpBeer because: (no reason given)


That's NOT what he said.

Observing how our relationship with God “is personal but not private,” he stated that our journey of faith “is born of and enriched by the communion of the Church.”

“Whoever says they believe in God but not in the Church, has a direct relation with Christ outside of her, falls into an absurd dichotomy,” he noted, stating that “God has confided his saving message to human persons, to witnesses, and it is known to us through our brothers and sisters.”

However, to walk our path in the Church is not always easy, because “at times we encounter human weakness, limitations and even scandal in the life of the Church,” the Holy Father said.

But even so, “God has called us to know him and to love him precisely by loving our brothers and sisters, by persevering in the fellowship of the Church and by seeking in all things to grow in faith and holiness as members of the one body of Christ.”
Concluding his address, Pope Francis encouraged those present to keep in mind that, “as Christians, we cannot disregard the other, the Church; we cannot save ourselves on our own.”

I agree and disagree with his statement.

The Church brought us scripture which brings us Jesus. The Church also brought us the great writings of the saints and the awesome prayers and mediations that bring us closer to God. But the legalities of the Church, as helpful as they can be, can also be a hinderance to many.

I could not fit all that in the title. Lol. nor what was said in the video, so condemn was the best I could come up with.
edit on 5-7-2014 by Wifibrains because: (no reason given)

He would say that, because his is a position which tops a hierarchy, whose entire existence is a heresy against Christ, and counter to his instructions to his people, and furthermore ignores the fundamental manner in which Christ comported himself.

Jesus Christ said "I am the way, and the truth, and the life. None cometh unto the Father, but through me.".

He did NOT say ANYTHING about a cadre of be-robed old men, nor about those men presiding over his people as conduits for worship, nor about those men holding sway over a massive amount of wealth, despite vows of poverty, and the needs of the people they are supposed to protect, NOR did He mention anything about creating a government like system, let alone a nation state, based on a corrupted version of His message to his people.

All of those things are inventions of Roman power brokers, who were desperately trying to cobble together a dirty version of Christianity, which would allow people to take up the new order, and none the less be controlled, their afterlives held for ransom by a disgusting, tyrannical and power hungry organisation, which ended up being little different to any other vast power structure in the world, ancient or modern.

Christ broke bread and taught people His message in the street, in their homes, and forged personal bonds with those he preached his message to. He was not a politician, nor a councilman, nor a tyrant, and therefore no tyranny which sprung up from his footsteps is of Him, but is either of man, or of Satan.

No man of mortal construction, nor any cabal of mortal beings, may stand between a person and Christ, without inciting his ire, without risking an eternity in the damned, black pit of Hell.

So it makes sense that the Pope would make such a statement as this, because as people realise the error of following the Roman method, he and his compatriots loose power in the world, which is all to the good, and the benefit of the entire Christian population in my humble opinion.

posted on Jul, 5 2014 @ 08:11 AM
link
With the decrease in Catholics actually going to church he is just trying to hold on to the flock.

How severe is the crisis?
It’s “the largest institutional crisis in centuries, possibly in church history,” says the National Catholic Reporter. Worldwide, the Roman Catholic Church now has 1.1 billion members, compared with 1.5 billion Muslims and 593 million Protestants. In the U.S., all the major denominations have seen their numbers decline in recent years, but the Catholic Church has taken the biggest hit. Since the 1960s, four American-born Catholics have left the church for every one who has converted, according to a 2009 Pew study. In 2008 alone, Catholic membership declined by 400,000. More than 1,000 parishes have closed since 1995, and the number of priests has fallen from about 49,000 to 40,000 during that same period. Some 3,400 Catholic parishes in the U.S. now lack a resident priest. “Catholicism is in decline across America,” says sociologist David Carlin.

What about in Europe?
The situation there is even more dire, especially in the most historically devout countries. In 1991, 84 percent of the Irish population attended Mass at least once a week. Today the weekly attendance figure is less than 50 percent. In Spain, 81 percent of the population identifies itself as Catholic, but two-thirds say they seldom or never attend services. And the priest shortage is acute—in England and Wales, the church ordained only 16 clergy members in all of 2009.

Older article but I doubt the numbers are any better. However you can certainly find articles that say everything is peachy Keen and membership is growing.. Who you gonna believe.. The church has always been big on' through them only can you know Christ'.. Not just Catholics either.

originally posted by: WakeUpBeer
"Audience of 33 thousand." Mean anything? Idk.

Anyway, I'm pretty sure this is how the Catholic church has always felt.

I think you are right on the money here.

Jesus is the high Priest of the Protestant church, He advocates between God and man. The Pope wants that spot all for himself, the Catholic church has always claimed that their clergy their church advocates between man and God, hence the divide between the two Christian denominations.

Its scary so many have accepted this guy, he sounds like a wolf in sheeps clothing

Its scary so many have accepted this guy, he sounds like a wolf in sheeps clothing 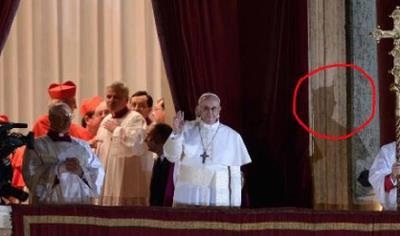 We have a winner!

Couldn't have said it any better myself.

He sounds like he is saying salvation itself is communal rather than individual, and only through the church can one attain their salvation.


Its scary so many have accepted this guy, he sounds like a wolf in sheeps clothing

That shadow is coming from the guy in the red robes and hat...lol.
edit on 5-7-2014 by daaskapital because: (no reason given)

posted on Jul, 5 2014 @ 08:35 AM
link
There is an old saying a goat wrapped in silk is still a goat,then and again he is correct I do not need to appoint an imaginary friend my personal lord and saviour.

the pope devil who wears prada is full of #

the bible even tells us to "pray in secret" if we feel the need..

That shadow is coming from the guy in the red robes and hat...lol.


it is what it is

Yes, that is exactly what he is saying, and in so doing further invalidating his position. What is more, it makes a nonsense of the idea that the Pope is a learned man, since clearly his reading level is not adequate to the task of comprehending the word of Christ.