In 2010, Rasmus Nielsen from the University of California, Berkeley found that Tibetan people have a mutation in a gene called EPAS1, which helps them handle low levels of oxygen. Thanks to this mutation, they can cope with air that has 40 percent less oxygen than what most of us inhale, and they can live on a 4,000-metre-high plateau where most of us would fare poorly. To date, this is still “strongest instance of natural selection documented in a human population”—the EPAS1 mutation is found in 87 percent of Tibetans and just 9 percent of Han Chinese, even though the two groups have been separated for less than 3,000 years.

But when the team sequenced EPAS1 in 40 more Tibetans and 40 Han Chinese, they noticed that the Tibetan version is incredibly different to those in other people. It was so different that it couldn’t have gradually arisen in the Tibetan lineage. Instead, it looked like it was inherited from a different group of people.

By searching other complete genomes, the team finally found the source: the Denisovans! The Tibetan EPAS1 is almost identical to the Denisovan version.

Denisovans or Denisova hominins are a Paleolithic-era species of the genus Homo or subspecies of Homo sapiens. In March 2010, scientists announced the discovery of a finger bone fragment of a juvenile female who lived about 41,000 years ago, found in the remote Denisova Cave in the Altai Mountains in Siberia, a cave which has also been inhabited by Neanderthals and modern humans. Two teeth and a toe bone belonging to different members of the same population have since been reported. 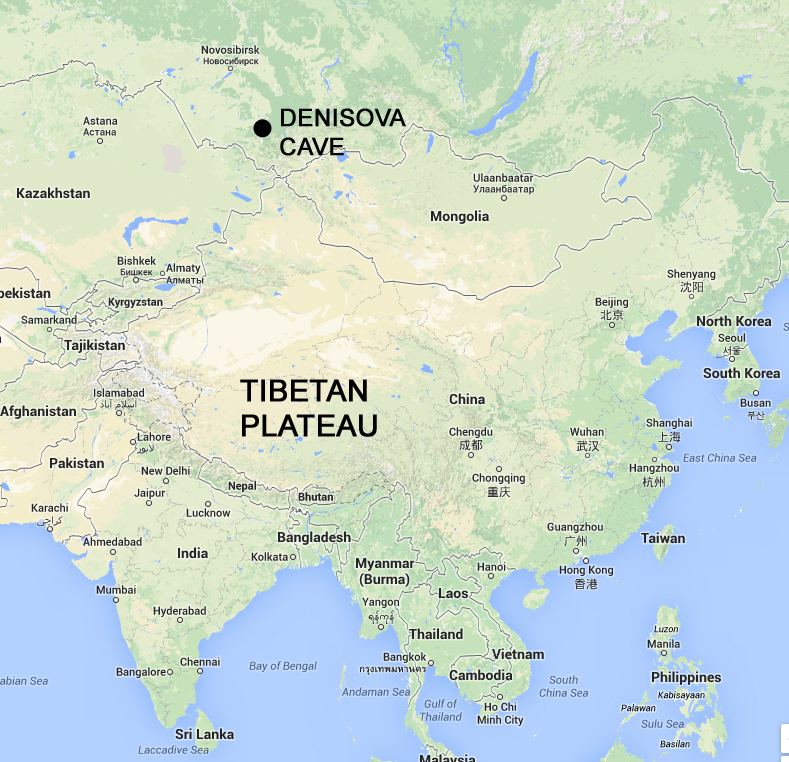 Nielsen suspects that modern humans had sex with Denisovans in Asia, somewhere between 30,000 and 40,000 years ago. They inherited the Denisovan version of EPAS1, which lingered in the populations at very low frequencies. The carriers fared better at higher altitudes, and their descendants colonised the Tibetan plateau. This explains why the team found the Denisovan EPAS1 in the vast majority of Tibetans, but also in a couple of Han Chinese people living outside of Tibet.

So ummm the Aryans where true after all?

Genetics is racist i don't like it, this only mean we are not equal after all and no matter how much i try ill never be a Sherpa.

Also i don't like the explanation of why there is such high concentration of the gene in the Tibet and not in the rest of Asia, if we mix with them we should all have it in more proportion, random is random but what i know.

Very interesting find, but again at some point we will have to change the paradigm regarding racism, after all it seems we truly are not all the same, we should all be treated equally regardless of race but don't lie to ourselves, depressing .

The only thing about modern science that is depressing is that it is hidden under an umbrella of political correctness, and if you do not abide by todays faddish doctrines, you are unemployable in a vast swath of establishments.

As for the Tibetan's and genetics, these researchers would well do to carry on across into South America and see if they can retrieve the bones and DNA of the tribes that lived upon the waters and had jet black blood.

originally posted by: Indigent
Its depressing to know sick people as the Nazis where in part right

A broken clock is right twice a day. Doesn't mean I get depressed at the sight of all clock research.

Genetics, DNA, differences, all a reason and cause for celebration.

posted on Jul, 3 2014 @ 07:00 AM
link
Interesting stuff. I think the Denisovans were actually a different species to us and were closer to Neanderthals. We split from them about 600-800000 years ago but somewhere along the line someone has bred with them. Wonder what they looked like?

Also i don't like the explanation of why there is such high concentration of the gene in the Tibet and not in the rest of Asia, if we mix with them we should all have it in more proportion, random is random but what i know.
.

The concentration is higher because of selection of the fittest as people moved into the higher altitudes.

Makes sense to me.

if we all interbreed with them and them some moved to higher ground i think it should be more prevalent in the lower ground population, when something is like this so isolated it seems to me like a mutation in an isolated population, so in my head people moved there and them change.