First they would not allow members of the press near these facilities and now a standing US Congressman in his own state?

My thoughts are that there are quite a few adults in these facilities as well as children!

Also why the secrecy on whom they are planning on releasing these children too?

I just saw the Congressman on TV, and he stated they are giving him an "appointment" to visit the facility on July 21st! WOW! Could it be they are buying time to hide the grown ups?

A Health and Human Services official refused to allow a member of Congress to enter a facility in his district where some of the unaccompanied immigrant children are being housed.

Representative Jim Bridenstine (R., Okla.) was told he could schedule an appointment for July 21. “​What are they trying to hide?” Bridenstine said after the incident. “​Do they not want the children to speak with Members of Congress? As a Navy pilot, I have been involved in operations countering illicit human trafficking. I would like to know to whom these children are being released.”

So what are they trying to hide?

That makes sense to me.

Those children are being shipped all over the US right now.

Funny thing they are only being shipped to 'red states'.

Anyone see the writing on the wall?

With Mr. Pen and his phone that is going to act unilaterally ?

posted on Jul, 2 2014 @ 06:40 PM
link
I just have to say...wow from the lips of fox news to ats live feed it took all of 10min after the interview to arrive...on topic...is it not obvious things have gone too far? Shouldn't we sit down and call time out to the whole government and sort this mess out before it implodes on us? That's my 2 cents.

Nancy Pelosi was allowed to go to one, but this guy wasn't? They either are doing some evil experiments OR they are hiding the fact that there are many adults being allowed into the country as well.

I also failed to mention that he described the place as "A military barracks type building that was surrounded by a chain link fence with a plastic wrapping on it so no one could see thru the fence. Also, it did appear to not even have any sort of gate.

Is that why in murrieta ca they just turned away 3 busses from the Texas area?
CA I am sure we can agree that ca is a rather Blue state.
So they are not only being shipped to red states


Nancy Pelosi was allowed to go to one, but this guy wasn't? T

And the only difference is that letter by their names.

Which is why I believe the 'conspiracy' theory.

Changing the demographics for a later 'pay day'.

They are trying to provoke a "civil" war if you will.

This is going to get ugly very quickly.

He obviously doesn't have a "need-to-know".

He should just shut up, mind his own business, give a speech, and leave the lying underhanded crooked illegal activities to the president!

Just like 0bamacare, Americans are going to have to wait to see what's in the package.

OH yeah a 'crisis' they created.

We can bet our last fiat currency dollar.

They sure the hell aren't going to let this 'crisis' go to waste.

originally posted by: Snarl
Sheriff Joe said it: This is a manufactured crisis.

Just like 0bamacare, Americans are going to have to wait to see what's in the package.

Of course it's manufactured!

First off it is the final phase to accomplish Cloward and Piven.

THEN we have this! Government Advertised In JANUARY For “Escorts” For 65,000 Illegal Alien Children Which proves this administration is absolutely guilty of creating this problem!

originally posted by: Euphem
a reply to: seeker1963

They are trying to provoke a "civil" war if you will.

This is going to get ugly very quickly.


I have said we have our own front row seat to how the Palestine, Israel 'conflict' started.

Only a matter of time.

I wanna see some of those (D) politicians hugging on kids covered in scabies with lice crawling out of their hair.

I wanna know why BHO hasn't jumped on Perry's invitation to take a tour of the border while he's on the taxpayer's dime down in Texas.

That and the fact that a new poll just released has Obama rightfully showing as the worst President sense World War II.
He's all ready gave his Hand Shake and given away our jobs to them, he needs them for his popularity. 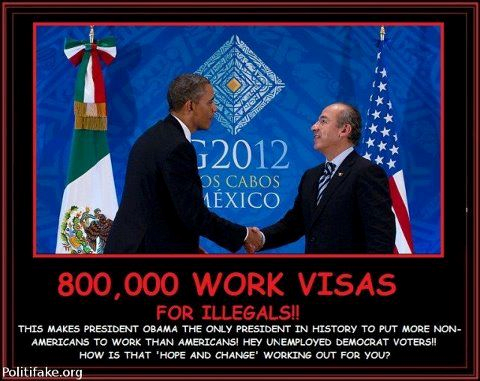 Doesn't the Palestine and Israel conflict have a pretty deep seated religious and holy land issue?
I fail to see how the USA and mexico/central American countries are on that same level

Is that why in murrieta ca they just turned away 3 busses from the Texas area?
CA I am sure we can agree that ca is a rather Blue state.
So they are not only being shipped to red states


Murrieta CA is a Republican district.

Obama doesn't hire them.... the company's hire them
Government isn't allowed to tell a company what to do.

Then someone isn't paying attention to current events.

Like flag waving, and the refusal to learn english.

Even the 'federal' courts are crying 'discrimination'.

Well your comment was about sending them to only red states, not districts.
CA is far from a red state and we get plenty, I live here,just moved from the murrieta Temecula area