posted on Jul, 1 2014 @ 11:41 AM
link
This already happened or the news were leaked in 2008 already. My question is what was done that we do not know of. What is currently happening in dark labs sponsored by sic governments? And as we know if the info is out it meant that whatever is done went to a new stage already. Scary world we living in. See link for story.


Where do scientist stop. Embryo now. Next scientist is curious bunch, what happen if 1 decide embryo is not enough and want to see what happen after 6 months a year. Can we get it to childhood est.


Embryos have been produced secretively

What were the embryos 'secreted' from? A gland of some type?

I just have a problem with media doing this kind of writing about what I think is a rather important subject.

Okay, I jumped the gun. I am not used to hearing it put this way, but it is proper use of the word.


I suggest you ask the sic Daily Mail.

felt. hopefully they are careful and keeping in mind illnesses that can be generated if not carefully managed. They may have full grown shark/dolphin - mer men? Or something else what caused this scientific interest 1 can only imagine. Worst case some ET looking things are made for blubeam or what bluebeams new name is and are used to act in a invasion like process after being placed inside advanced craft. This way when all are excited from fighting and the REAL ones come or SHOW all are in fear and ready to fight...

originally posted by: boymonkey74
Look I escaped with 4 others from this lab but don't tell anyone :O.

SHHHHH I escaped from the undersea one

posted on Jul, 1 2014 @ 11:55 AM
link
If i look at the current batch of presidents i think they testing the 1 st bunch of talking trailertrash / chimp mix

originally posted by: boymonkey74
Look I escaped with 4 others from this lab but don't tell anyone :O.


Seriously though. I have no doubt that human/animal hybrids are in labs all over the planet. Mixing human eggs/sperm with critter eggs/sperm. Changing a bit of dna here or there. I bet it goes on a lot ... 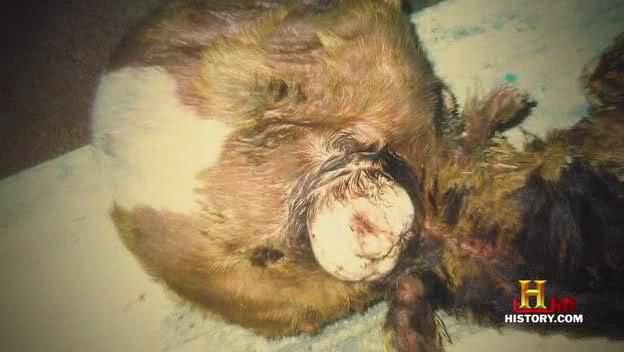 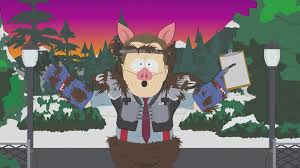 I hope they don't find a cure for some nasty disease, you wont be able to hate so much those evil scientist if they do.

Ill wait for the human/plants hybrids to panic in the mean time.

A retired New Mexico State Trooper, Gabe Valdez, showed the TV UFO Hunter Team what looked like a human head on a cow (see video below).

After the the broadcast of the “human headed cow” episode, Birnes says they “evidently stepped on the big one. We were told what did you do. You guys are off the air. You guys are bad guys.”

Birnes also says he was told by somebody that claimed to be from an intelligence agency that the show went too far when they aired the human headed cow.

posted on Jul, 1 2014 @ 12:35 PM
link
If scientists came up with a way to get rid of the whole pregnancy process the world would be better off anywaus i mean think no more retardation or birth defects a healthy baby every single time how is that a bad thing dony fear the sun riseing on the horizon rejoyce in it a reply to: neversaynever

posted on Jul, 1 2014 @ 12:39 PM
link
This adds to the "Montauk Monster" phenomena along with all of the other mysterious creatures that were washing ashore in recent times. All of these creatures seemed to be weird combinations of different animals and such. Makes you wonder....

You mean like a cure for one of the mankind ending super viruses they're creating? Yeah I suppose that could have some benefits. Welcome to the future.

I can't help but hope these will be some super sexy Avatar type hybrids. I would never run around on my wife but I honestly think she'd give me the green light on that one.

Too bad they'll probably be monstrosities writhing in pain 24/7... but we can hope.

Since the funding has dried up at least for the time being, maybe that's where the giant rats are coming from, they peobably bucked them out of the labs.!

Just to add; The same story was covered here at ATS in 2011,

Peoples opinions and moaning and groaning about this topic changes nothing.

If people can do a thing then chances are somebody somewhere will indeed be doing just that after all humanity has never invented a tool it has not used.

This type of technology could offer not only increased longevity but the ability to allow humans to survive in different and hostile environments. Taken to its logical conclusion maybe even near immortality.

Thing is once we create something better or more intelligent than ourselves humanity pretty much becomes obsolete.
edit on 1-7-2014 by andy06shake because: (no reason given)

Here you have the wonders and horrors of scientific research. And both can have ramifications if done incorrectly. It is a double edge sword, either a blessing and a miracle cure, or a nightmare waiting to happen.

Scientists have to figure out new ways to cure the modern plagues of the human race. More and more incurable conditions are coming up, causing suffering and anguish for those who are stricken with such or their family members. Would anyone deny a chance for there to be a cure for say Alzheimer’s disease, or Parkinson? How about if this could end something like heart attacks and strokes, would it be then something that is looked down upon or frowned about? Or a cure for say malaria, or any number of exotic diseases, cancer, or even HIV/Aids? Millions of people die or suffer from those conditions and any remote chance that this will lead to a cure is an avenue that should be worth the risk of looking and exploring, as all other options are slowly and quickly running out.

More and more diseases are starting to make a comeback with a vengeance and with no real means to cure or to alleviate the pain and suffering from such, or the stigmas that go along with having such. Even now there are those who are stricken with Hansen’s disease, (Leprosy), in some parts of the world are often shunned if not kicked out of their homes and communities, even though there it is not the scourge it was once, due to a lack of understanding. Children are left homeless in Africa due to the HIV epidemic that ravishes the continent of Africa, and are often left out in the cold.
And millions go hungry every day with very little or nothing to eat. What if in their working on such, they come up with say the solution to end world hunger? Would it be so bad then?

And what of the people that are sent off to war and are maimed and sent home. Would you deny them a chance of being normal and able to function again? Do you not think that say a soldier who lost a foot, a leg or an arm or a hand, would be so willing to turn down the chance to walk, touch or even hold a love one again without the use of something artificial?

Like all modern science before this, there were and have been experimentation on animals that have led to the betterment of life for those who were stricken without hope or cure. Things like vaccinations and diabetes all started with animals used in such to see if they could use what the animal had to prevent or even cure a person. And if by some means that cures for some of the modern problems that affect society can come out, then by all means, let the scientists come up with the cures and cure people of some of the numerous problems that are around the world.

But as I stated before this is a double edge sword, and one that must be approached with very carefully. While the modern miracles can be a blessing, the last thing one would want is also a modern nightmare where something that is harmful gets out. A new predator could cause havoc on an the unsuspecting.

As long as they are careful, treating this like it should be, with the utmost care, with back up and failsafes and over sites, to ensure such, then let such continue.