Beyond Red vs. Blue: The Political Typology {PEW Research Report just out}

Partisan polarization – the vast and growing gap between Republicans and Democrats – is a defining feature of politics today. But beyond the ideological wings, which make up a minority of the public, the political landscape includes a center that is large and diverse, unified by frustration with politics and little else. As a result, both parties face formidable challenges in reaching beyond their bases to appeal to the middle of the electorate and build sustainable coalitions.
.

The latest Pew Research Center political typology, which sorts voters into cohesive groups based on their attitudes and values, provides a field guide for this constantly changing landscape. Before reading further, take our quiz to see where you fit in the typology.
.

Discover which typology group you fit into and explore each group’s views on major issues.
.

At the other end of the spectrum, Solid Liberals express liberal attitudes across almost every realm – government, the economy and business and foreign policy, as well as on race, homosexuality and abortion – and are reliable and loyal Democratic voters.

"Steadfast Conservatives" = 12% of the General Public.

"Young outsiders"--conservative on gov, not social issues: 14% of General Public

"Next Generation Left"--Young, liberal on social issues; less so on social safety net = 12%

"Bystanders"--Young, diverse on the sidelines of politics = 10% of whole pop

I find this an interesting set of findings about the political landscape.

It appears that clusters have appeared which have not existed heretofore.

That's certainly a large enough chunk to wag the dog.

Guess I need to take the survey and see which group I'd land in.

Maybe others will, too.

Short and doesn't take much time to take.

I came out as a "Hard pressed-skeptic".

At least the words they used to describe me are accurate!

posted on Jun, 26 2014 @ 05:10 PM
link
I found their quiz absolutely stupid. The options presented were full of loaded language, black and white and had no nuance whatsoever.

posted on Jun, 26 2014 @ 05:26 PM
link
a reply to: BO XIAN
I thought the options were fairly disgusting!
Young Outsider...
It was like voting in a presidential election - "which answer do I hate less".

posted on Jun, 26 2014 @ 05:32 PM
link
OK, Had to solve a problem with a defective switch assembly on my new potters wheel. Will go try and take the survey/quiz now.

Such surveys to categorize ARE DESIGNED as a FORCED CHOICE in order to put folks into categories.

If you want an instrument that is totally tailored to YOUR UNIQUE CONSTRUCT SYSTEM--TAKE THE GRID AT:


Put people and/or perspectives in the columns to be sorted. Sort on traits or habits of the people or descriptors of the values/perspectives if that's what you're sorting.

The MAP AND CLUSTER CHART as the result can tell a LOT of data that's POTENTIALLY useful.

However, a warning . . . if you are fragile you should have a professional interpret it to you. Avoid jumping to a layman's conclusions. Print it off and take it to a professional. Though many won't have much more of a clue about it than you do. Basically, you're more likely to be emotionally etc. close to folks who are most similar . . . and to be at odds with those most distant. And it is likely that if you are quite distant to one or both parents and you are at odds with a boss--the boss will likely be very similar to one or both parents.

I know they are, but I felt that these choices of theirs were false ones.

I'm a STEADFAST CONSERVATIVE according to that survey. LOLOL.

There were sure a lot of questions about the poor and plenty about government and overseas adventurism. I answered somewhat on both sides of those issues. Interesting how it categorized me anyway.

I understand your feelings. Forced Choice instruments are that way.

The GOAL of a forced choice is to FORCE EVERYONE INTO PRESET CATEGORIES.

We know that one size does not fit all. But we try to find out, with such instruments, where the CLUSTERS OF SIMILAR PEOPLE are.

That's one reason I prefer the Kelly Construct Grid . . . it takes folks construct systems--how they construe reality--where they are . . . and sees what that picture is like.

If one wants . . . one can compare the resulting pictures from the grids . . . but that gets complicated fast.

False in what sense?

I have a hard time understanding that term with regard to the items to choose from.

There was SOME nuance. But such things are DESIGNED TO BE FAIRLY STARKLY BLACK AND WHITE. The GOAL is to force folks into pre-set categories.

Or, sometimes it is to give the instrument to a wide range of people and see what clusters emerge. That tends to be the PEW org's approach.

Nevertheless, they are still designed to herd people into readily definable clusters.

And nothing very summarizing could be stated very readily.

No surprise there! LOL.

Thanks for taking it and for sharing the results.

originally posted by: BO XIAN
a reply to: ketsuko

False in what sense?

I have a hard time understanding that term with regard to the items to choose from.

I have to agree with Ketsuko on this, those questions options were way too restrictive. As example the one where you get to choose between military power or diplomacy, either or wasn't really much of a choice.

Anyway it says I'm a "Hard pressed skeptic." The picture shows me as almost a liberal. 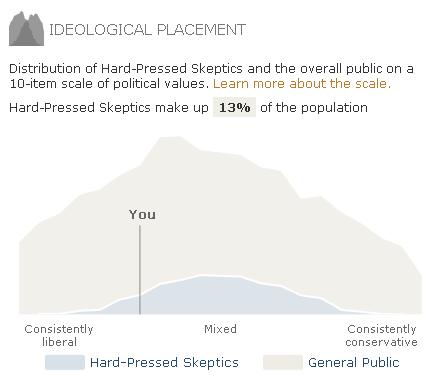 When one says "TOO restrictive"

one implies a STANDARD of restrictive . . .

What's the standard of restrictive and where does it derive from?

and how/why is this one TOO restrictive, compared to that standard?

IF the items were NOT restrictive, in significant respects, no useful clusters could be identified. All we'd have would be individual descriptors of individual perspectives--kind of like a personal biography. That's very hard to cluster people into very meaningful like-minded groups, based on very idiosyncratic biographies. One would easily end up with many hundreds or more of very tiny clusters of very unique individuals.

That's just not very useful in grasping where a population is in terms of its major values clusters.

I'm going to take it now. I always complained about the left right paradigm and how it doesn't represent the people in my opinion as a 26 year old fellow. I'm a skeptic of government myself and can't wait to see where it puts me since I'm always called both conservative and liberal... lol


Question 7 irked me. Poor people are taking advantage and are being taken advantage of... I am stuck on this question because I don't like either answer.
edit on 26-6-2014 by Antipathy17 because: (no reason given)


More than two choice would have been nice.

"This relatively young, largely independent group holds a mix of conservative and liberal views. And while more lean toward the Republican Party than the Democratic Party, Young Outsiders generally express unfavorable opinions of both major parties. They are largely skeptical of activist government, as a substantial majority views government as wasteful and inefficient. Yet many diverge from the two conservative typology groups – Steadfast Conservatives and Business Conservatives – in their strong support for the environment and many liberal social policies. Compare groups on key issues."
edit on 26-6-2014 by Antipathy17 because: (no reason given)

Each choice presented was an all or nothing extreme with loaded language. I am a conservative socially with libertarian leaning when it comes to law, but I felt that most of the "conservative" choices were written with slightly "nicer" versions of the typical stereotypes in mind.

I got five in and stopped. I couldn't take either option. Make of that what you will.

I understand your discomfort with the instrument.

Giving 3 choices would have CHANGED THE NATURE of the instrument AND THEREBY inferences that could handily, tidily, functionally be derived from it.

FORCED CHOICE is a very reasonable design GIVEN THE GOAL OF CATEGORIZING FOLKS INTO FAIRLY CLEAR AND STRAIGHTFORWARD CATEGORIES/GROUPS.

This instrument's report out to individuals DID GO THE 2ND mile and more toward moderating the forced choice aspect by showing you where ON A CONTINUUM, your particular collection of answers placed you. That makes it more robust than a strictly forced choice result report.

This report out also noted how you compared with the general population ON EACH OF YOUR ANSWERS. That, too is a very robust and idiosyncratic comparison.

So, this instrument and it's report out TRIED HARD to give you the best of both worlds--a clear and somewhat strict categorization into clusters/groups

a more idiosyncratic depiction of how you individually compared to your subgroup--were you on one end or in the middle and how far . . . AS WELL AS how each of your individual answers compared to the general population.

HOWEVER, I'D BET that all of you who are fussing most stridently against the forced choice aspect--did not GAIN MUCH USEFUL INFO from the individual item comparison with the general population. Or am I wrong about that.

My point being that it's one thing to fuss about the strict narrow nature of a forced-choice instrument and quite another to do the complex work of trying to make sumarizable sense out of an idiosyncratic comparison of all your answers with the general population.

Anyway--I understand your beef with the instrument. I don't think you appreciate sufficiently the psychometric issues involved enough to respect the reasons behind them. OF COURSE forced choice will NOT be a one size fits all.

But if THAT were the goal, we'd stop at:

YOU'RE HUMAN and that's all we can say about you.

Please try the grid at the U Calgary.

If you need help with it, PM me.

You can sort virtually anything you wish . . . political positions, whatever. What would likely be most useful would be to sort people you are in significant relationship with--spouse, relatives, children, co-workers, boss, at least one person you have a generally negative response to . . . ideal friend, ideal boss, ideal spouse. spouse at worst, spouse at best . . . you at worst, you at best, you on average; spouse on average etc.

Sort on traits . . . more kind; more angry; more patient; more lazy; more silly; more fun etc. I usually choose a range of ratings from 1-5 or 1-7. Probably 1-5 would be more functional. But either is OK and useful.

Anyway--it's the extreme opposite of the kind of forced choice this instrument is.

Yet it produces meaningful clusters. It's a VERY powerful instrument. However, if you sort 25 people . . . that's 25 X 25 decisions in the sorting. LOL.

and saying that you want a CLONE SMACK IN THE MIDDLE OF one of the groups in the survey.

Then you get her home and decide you wanted more variety, mystery, divergeance from the mean of the group . . . in clone form.

That issue needed to be decided first thing. Choosing a clone and the fussing because it's a clone is a bit . . . silly.

When one chooses to participate in a FORCED CHOICE--two items question sort of survey . . . one has to accept the parameters involved or appear to be making much ado about things that should have been decided first thing.

As far as the graphic representation, I'm smack dab in the middle of the general public. So, I guess I'm a "centrist".

With regard to the questioning . . . the objections in this thread speak to a major problem with this country and why most people don't see anything getting done.

Sure, most questions could have been worded differently or have included a 3rd or 4th choice, but that is not the objective as Bo pointed out. Everybody seems to want their steadfast opinions to be given a voice without having to compromise here or there. Many seem to be taking a simple quiz way too seriously . . . Now, translate that to these issues when actual action is on the line, not just placing people in boxes for a survey.