posted on Jun, 26 2014 @ 03:06 PM
link
So earlier i was watching CNN when a some coverage of the plane came on. Apparently over night some info came together that confirms the plane had a southerly flight path. Confirmed by the ping from various satellites. 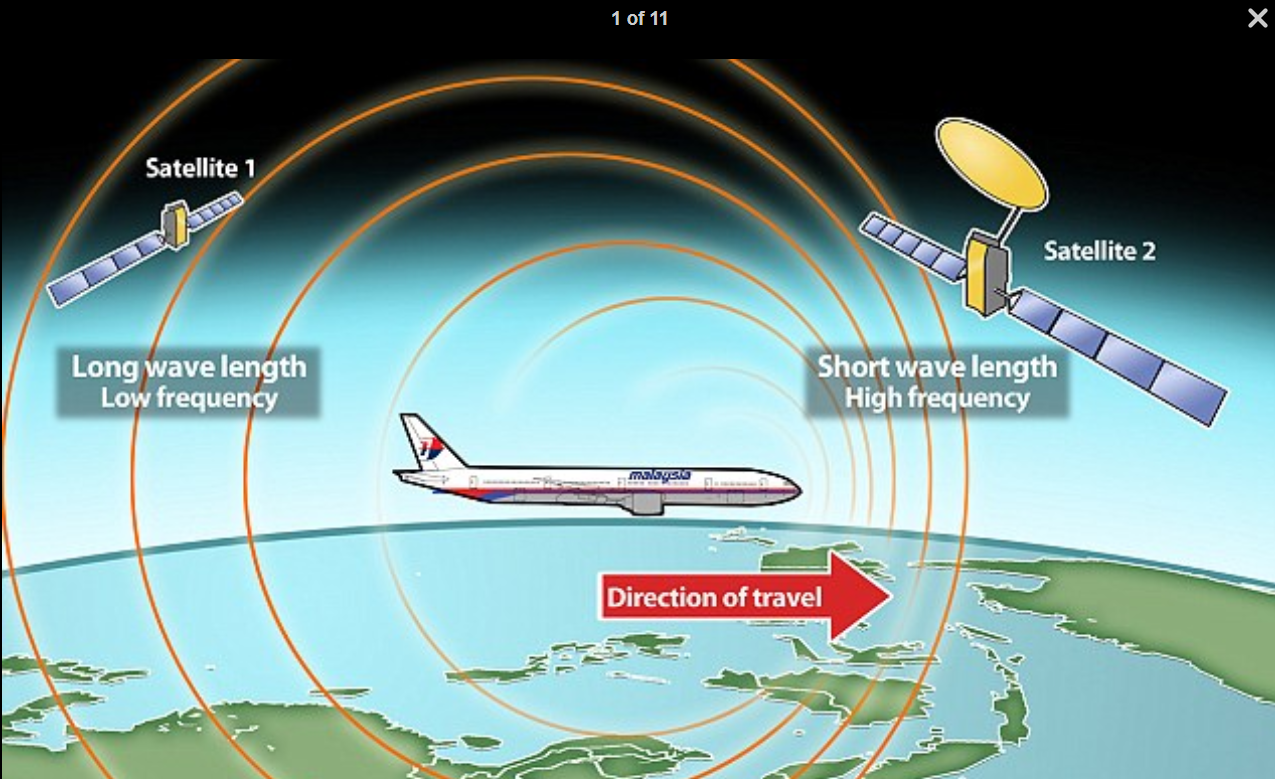 The 777-200ER Boeing aircraft used on the ill-fated flight has a maximum service ceiling of 43,000 feet and can very probably fly safely at even greater heights, one expert said. But at this altitude, where the atmosphere drastically thins it would take mere minutes if not seconds for hypoxia - a lack of oxygen - to set in if the cabin was manually depressurised by one of the pilots.

Now lets say the pilot or a nefarious passenger with an intimate knowledge of the craft hijacked it. Certainly the plane couldn't get too far on its fuel load. What if the person('s) responsible already knew this. A plane taken above it maximum ceiling could coast onward and for a greater distance than on its normal powered flight.

The debris found off of Australia could have been cargo ejected at low altitude in order to save weight and get extra mileage from the craft. That also implies several passengers or crew working together.

Now lets say they had enough fuel saved from that to make a u turn back toward Australia. Fire up the engines and fly the craft at a low altitude, under the radar and into the outback somewhere.

Maybe something like this flight path i sketched out against the current main stream theory. 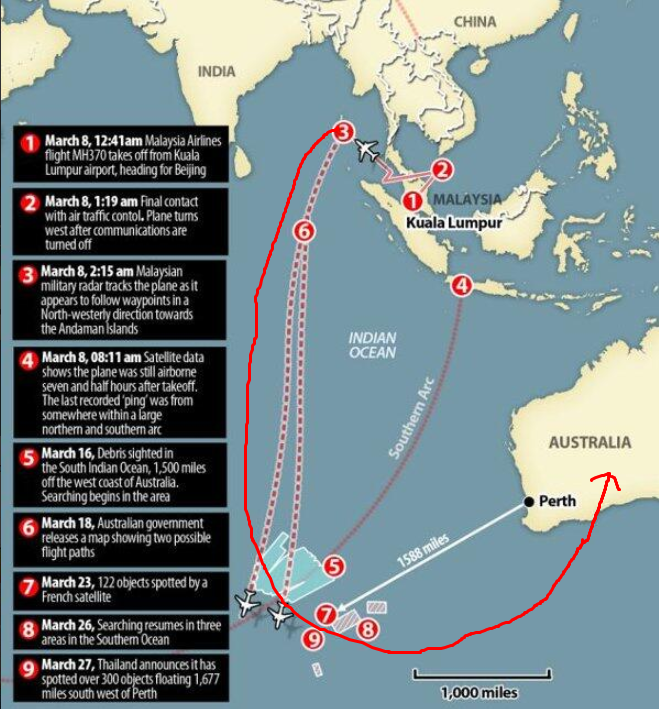 Would something like this be possible? Could it have been hijacked, passengers disposed of and enough fuel saved through coasting and cargo dumping that the plane would make it into Australia?

What ever happened to the pilot making a call after take off? Did anything come of it? I remember reading that a cell tower got a connection from the pilots personal phone.

Was it just a suicide mission by a passenger or crew member?

Is there any aircraft experts or pilots that can chime in on this theory of mine?

posted on Jun, 26 2014 @ 03:31 PM
link
I used to do things like that when playing the computer game flight simulators. It always seemed you could travel farther by going to the highest altitude possible and coasting your way down. Though you did lose airspeed by climbing up in the first place, but you regained it by drifting or even diving downwards.

But once a Boeing airplane has lost it's fuel and the engines come to a stop, it still becomes a glider, though a very heavy one. It'll be able to continue flying for another 17 minutes from an altitude of 35,000 feet.

Those planes have fly-by-wire systems that prevent stalling, so the only option is that the plane drifted downwards and landed on the ocean, desert or a runway. But if the engines sent out messages when they stopped, that would either be over a runway, the ocean or the desert.

So what about if its from an altitude much higher, say around 43,000 feet? What kind of distance would we be talking in that time frame?

Can jettisoning cargo make up for the extra distance to make it to land on this flight path?

G,day mate. I have given thought to the plane having landed in the aussie bush.
there are some bare bones strips around and several R.A.A.F. staging strips in the west
if it went in or landed you may never now.
heck its so bloody vast and empty you could loose france out there.
but, I do keep coming back to the comment posted here somewhere weeks ago that the plane was sighted out toward the U.S.N. staging base on the island of--- hmm cant remember the name

You can't jettison cargo from that aircraft. The cargo doors are on the side and they open up. They are not sliding doors nor is there a cargo ramp. I'm pretty sure the same problem would occur with the passenger doors as well. Once in flight and at altitude and they are opened...chances are they will be staying open.

But I would ask Zaphod before you take my word for it as he seems to be more interested in large scale commercial aviation than I am. I like the puddle jumpers and military aircraft.

The problem is im not talking about at altitude. im talking at or just above sea level. Below radar capability.
And the planes doors can stay open for the purpose of this thread.

If you were stealing a plane and didn't need to worry about being pressurized anymore then what is the problem with them remaining open.

Flying at 1000 feet above the sea then over land would not require a pressurized cabin.

Anything man made can be modified and manipulated to suit a need.

Zaphod told me that it cant be done. But i don't think he is seeing what use a slightly damaged airliner can have.

Think bomber, weapon, or any other reason with mal intent.

I doubt you could even open it while in flight and if you could, chances are that it would tear off and bring the plane down with it.

I understand. I just think your underestimating the power of ingenuity. They do make ropes and chains and cordage. It could be kept from falling free and taking out a wing.

I mean if anyone is going to go through the trouble of hijacking a plane and make it disappear I'm quite sure it was planned and not done on a whim.

I'm not saying you or anyone else is wrong. I'm just looking to cover all the different ways that my theory could in fact be valid.

Maybe there was a fire and suffocated everyone on board. I do not know nor claim to.

Just piecing the puzzle together the best i can with the information i have.

It could be anywhere in tens of thousands of square miles of ocean.

My theory is very similar to yours, with the exception of jettisoning the cargo. I believe that the plane is either intact on the bottom of the ocean after being gently bellyed in, or it landed somewhere.

Otherwise there would be some sort of debris to be found, either on land or water. There always is.

Then there is the UFO angle.

Otherwise there would be some sort of debris to be found, either on land or water. There always is.


There was debris found in the water i thought. There were claims made that the Chinese found some about 1500 miles off the coast of Australia. They did not specify if that was cargo or wreckage.

I'm really curious about the maximum range of the laden craft. I know they don't fill the tanks to the top. Just enough for the trip to be made and a margin of error for rerouting and what have you.

If its not in Australia then its somewhere in the ocean around there current search areas.

I'm also curious as to how far a half submerged craft, or one not totally resting on the seabed could move with the ocean currents.

Wouldn't the ALS also cause the craft to try and land perfectly parallel with the water? Does that system work the same without the aid of airport beacons and com systems?

posted on Jun, 27 2014 @ 02:57 PM
link
I still think it was hijacked to take someone, or a group of someones captive.
Changed course, landed, got the people they wanted off.
Completely disabled all tracking devices.
Refueled, took the plane back up (with now dead passengers, other than the captive one/s).
Crashed plane far from where anyone will be looking for it.
By the time they find it, the passengers will be fish food, and the real cause of death completely obscured.
Any missing will simply be assumed as lost in the crash, assuming their bodies are somewhere in the vast ocean.

It's one of the only scenarios that seem to fit the facts. If a suicide run, they wouldn't have flown evasively, and so far.

If a terrorist scenario, stealing an empty plane is far easier and more advantageous (or they would have crashed it publicly).

Unless of course, that is what happened, and some military jet shot it down, and THAT is being hushed up.

posted on Jun, 27 2014 @ 03:25 PM
link
I'm looking for someone who has knowledge of the craft. Someone who can give me ideas of the distance its capable of traveling and under certain scenarios.

Can anyone here help me determine the distance of the path i laid out? I cant figure it out using Google earth. 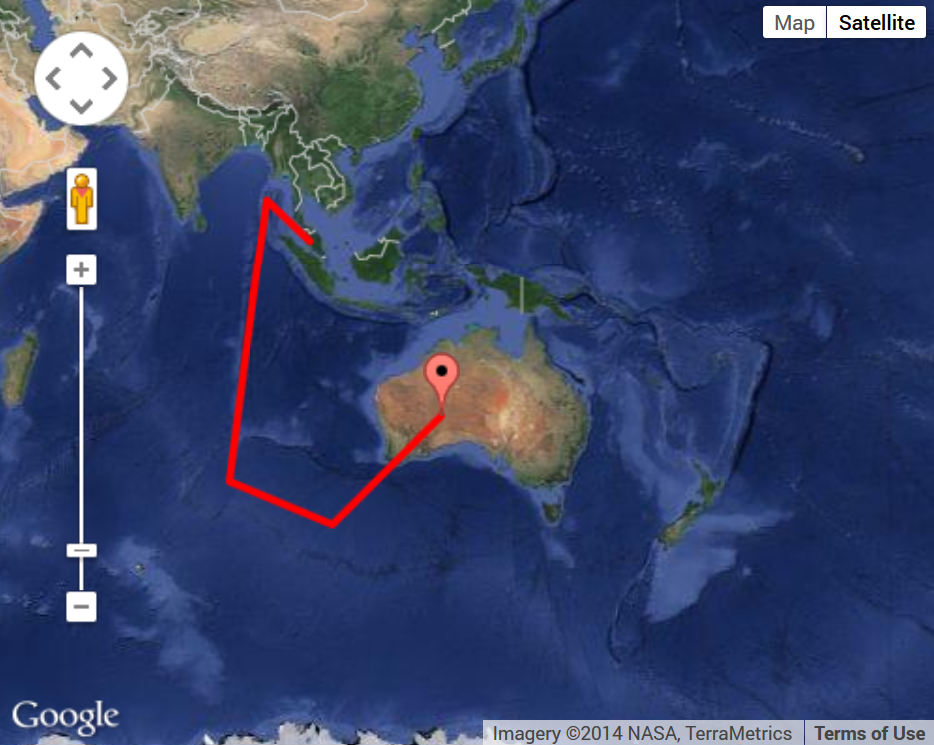 The distance is 6900 miles and change on this route. I believe its possible if they were able to shed some weight.
Though its still just at likely its sitting on the ocean floor or hit by a missile and is in pieces.