Police cordon off parts off downtown Stockholm over bomb threat 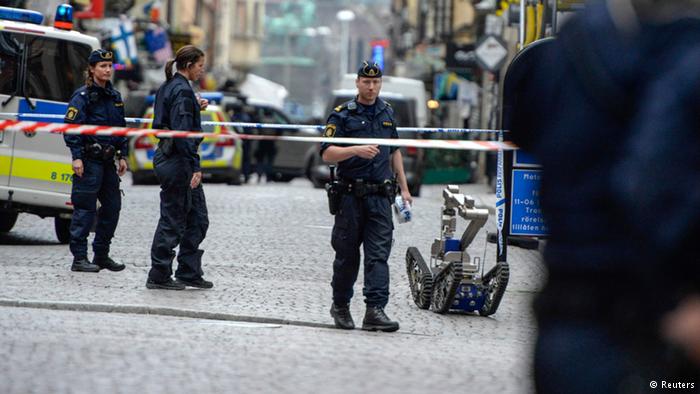 "The man has expressed his dissatisfaction with parties in parliament," Olsson added, singling out the Moderates and the Social Democrats in particular.

Offices belonging to the ruling Moderate Party, as well as to the Social Democratic Party are the in the vicinity of the human rights group – Civil Rights Defenders – the man targeted.


Police cordon off parts off downtown Stockholm over bomb threat

What can I say other than--- if this guy was expecting free legal help---
maybe he shouldn't made his stand in the same building with all the Human and Civil rights activists as his hostages?

anyway I'm surprised it happened in Stockholm and not here in the states...
lots of folks round here are truly fed up the politicians too--- maybe not enough to strap a bomb to their chests though ?

"A man has left the building and he has been arrested," police spokesman Sven-Erik Olsson told AFP.

"He has followed the instructions he got from the police during the arrest."

The suspect did not have a bomb on him, according to the police, who said they still had to search the building.

But the days not over yet--- and neither is the search...

I think it unlikely that he was thinking of seeking legal aid. He just fancied scaring the living bejesus out of some stuffed shirts. I can empathise with that, although doing something like this seems... silly.

All that ever happens, when a member of the public blows themselves up, or threatens to do so in the vicinity of a certain group, is that group becomes inviolate for some time after the incident. That does not acheive the aim of anyone who wants real change. That is why I believe that far from being merely dissatisfied with his governments behaviour, the fellow was probably suffering from some severe psychological problems at the time of making the choice to go ahead and pretend to be a terrorist.

I mean, pretending to have a bomb strapped to you, is pretty much the next dumbest thing to do, after actually going ahead and strapping on a block or ten of C4 and a detonator mechanism, and going for a walk.

posted on Jun, 19 2014 @ 05:20 PM
link
When enough crap is piled on you and your backed into a corner with no escape that is when the desperate measures come out. I think we will see a lot more of these actions in the supposed free western nations when the people realise that the governing bodies do not give a fig for the plight of the ordinary man and woman in the street. At the moment the populace is pushed to the limit, they are on the cusp. They just need a couple more supposed freedoms taking away the the SHTF.