The Liberty Incident: the WMD link.

posted on Jun, 19 2014 @ 12:35 AM
link
IF you're interested in a historical search..look up the Liberty incident [ USS Liberty, 1967] and ask why a us freighter was stooging about ibn a war zone at a time when the US was selling tanks to the Arabs, and planes to Israel, at a time we were hip deep in Viet nam...


Lyndon B. Johnston was dealing arms to all commers trying to pay for Nam. Ask yourself this...How many 55 gallon drums can a Liberty class freighter carry ? sad to say it, they KNEW there's chem weapons over there...that stuff used on the Kurds didn't just grow from sand. 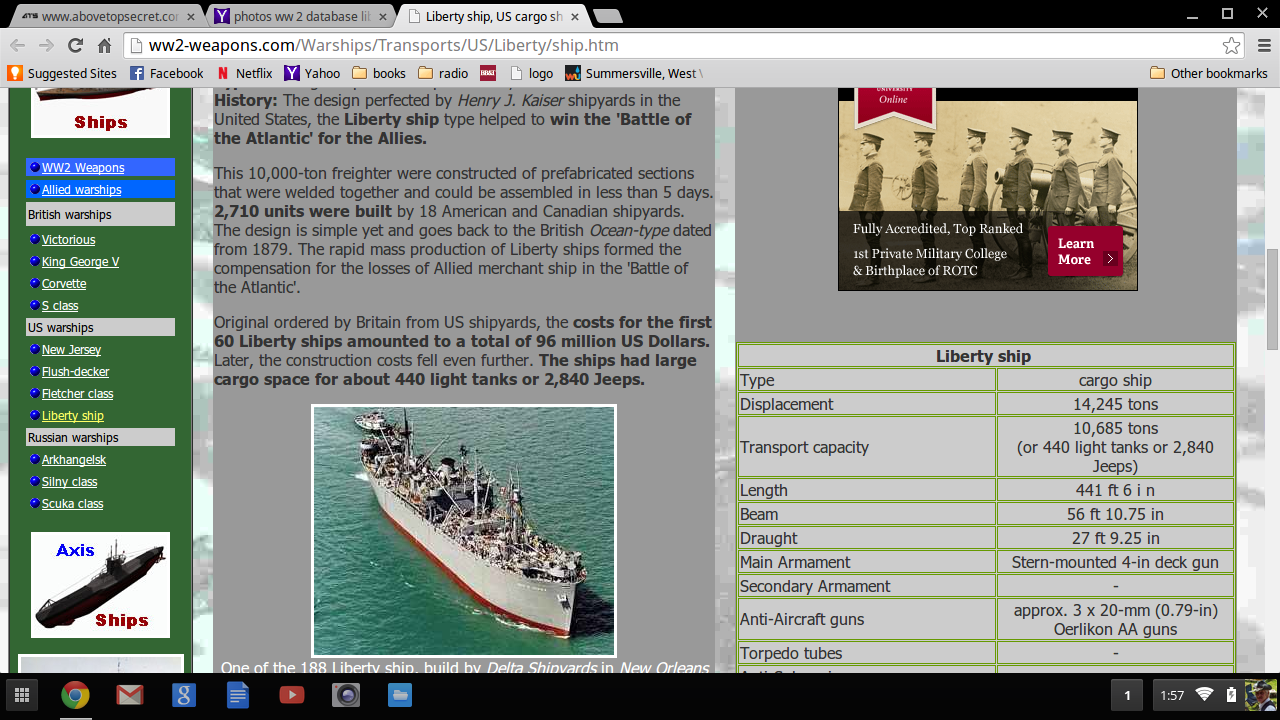 Seems to me the whole incident was mis-identification, or more precisely, the lack of the Israeli's to actually identify whom they were attacking in the first place. As far as what she was doing there, I have no reason to doubt the official story of SIGINT, after all, that is what that ship was being used for at the time. (Love how they call it a research ship though, lol).
It does certainly seem odd that the Israelis had been unable to ID the ship, being that it should have been readily apparent. GTR-5 is pretty easy to see both on the fore and aft of the ship, as well there should have been the ensign on the mast. Personally, I think the Israelis just disregarded the markings, thinking it was an Egyptian ship in disguise.

As far as carrying arms, fuel, etc.... why would the Navy send that ship, when they have perfectly capable ships of doing the same things more efficiently? Are you suggesting the US was selling to Egypt?

Its widely believed that Israel possesses nuclear, chemical and biological weapons, and it wouldn't surprise me. They do have their own nuclear research facility, Negev, and also most likely have similar facilities for chemical and bio weapons. BTW, Israel is not a signatory of the Chemical Weapons Convention, go figure. Really, who can blame them? Being surrounded by countries whom don't particularly like them and may possess similar capabilities.

posted on Jun, 19 2014 @ 01:16 AM
link
a reply to: Greywolf13A
So come out and say something.
I think pretty confidently that I am an expert on the Liberty incident as I have some ties to the "incident".
American soldiers were murdered by israeli terrorists, people who were supposed to be our allies.
They then tried...lied to cover it up by saying the ship was NOT flying a flag...
Then a couple of rescue flights were called back from on high...
Murder and nothing short, we should have bombed israel back into the stone age just after it's inception..."the lavon affair where they got caught again...err the first time.

BTW, the USS LIberty was a converted Victory ship, a follow on design to the Liberty class ships. It didn't have the 4" deck guns, just 4 .50 cal machine guns. I'm sure most of that cargo space would have been converted into "research" space for the gathering of SIGINT. Also didn't have the AA guns

I thought this graphic was interesting... pic
edit on 19-6-2014 by JJRichey because: (no reason given)

BTW, if you're going to post screenshots, at least put a link to the source. I"m sure anyone wanting to look into it themselves will greatly appreciate it, thanks!

M-48's to Jourdan, actually via Germany ...pre end user law. We were at the time trying to take business away from the old USSR..I remember film clips on the nightly news from that era..even tho I was all of 6..

been here all of 36 hours...still gettin' the hang of this, please bear with me..

uh, huh...Uss Pueblo...started out life as a CVE, later converted to a "Research" ship. If the Bay class were getting the mods, why use a Liberty, known to be used by the Greeks, conviently located just around the corner...???

Anything that can carry 440 x 11 ton tanks can pack in radios AND supplies, I figure...forward hold for cargo, aft hold for radio gear.

This either / or thing ignores the possibility of multi-tasking..

How many 1 gallon bottles of chlorine bleech or ammonia can you pack into the back of an m-151 jeep ? There's a real simple Cynide gas mix for you at a 1 to 1 ratio...just pour into a ventillation shaft..the janitor's bane..


how much room do you need for 1 gallon of bleech and 1 gallon of ammonia ? a PT boat could drop that off...but Greece wasn't using PT's at the time..

posted on Jun, 19 2014 @ 03:12 AM
link
Are you sayin that the USS Liberty was strafed by the Israelis for delivering chem weapons to the middle east somewhere?(Saddam,or Mubarak, or the Saudis??)

seems like.
Everybody's focused on Big Bad Nukes, common store bought chems would be invisible. Misdirection is a killer..