They Paved Paradise to Put Up A Sidewalk

posted on Jun, 18 2014 @ 02:30 PM
link
So I have been upset, well a little more than upset, banned words may be a bit more fitting. The city I live in has plans to cut down way too many trees in my neighborhood. There are X's on hundreds of trees you guys, hundreds!! Needless to say I'm a concerned citizen.

(I eventually discovered that, out of 590 trees that line the sidewalks in the neighborhood, 220 have been marked for removal, with 30 having been removed thus far.)

This is the tree that 2 doves use to call home: 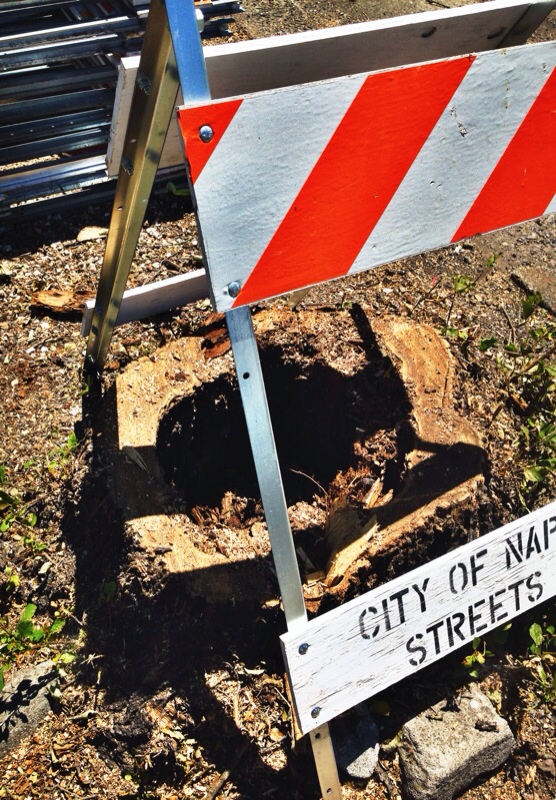 Just a few years ago, in 2011, the city removed 83 Redwood Trees for a parking lot, but they used them in high school wood class you guys, so it's ok. /sarcasm.

While the city did replace them with 125 smaller trees, I do give them credit for that but feel more could have been done to save those precious Redwoods. I tried to find an image of the Redwood trees still intact, but believe me, they were beauties, pure majesty from Mother Nature. 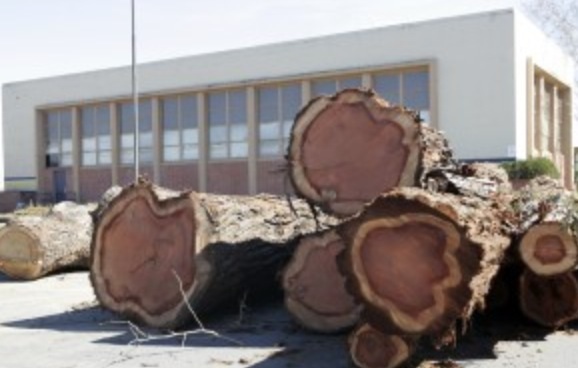 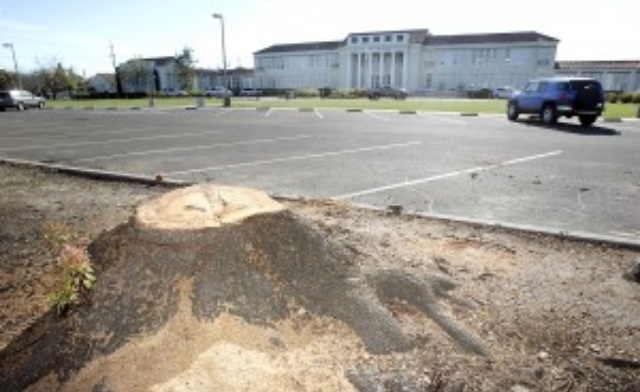 The neighborhood I live in is an older one, filled with beautiful homes, Victorians, Craftsman's and Arts and Crafts with tree lined streets. There is even an old tree that leans to one side and has an ant carved in to it, pretty cool and by far my favorite tree in the neighborhood. 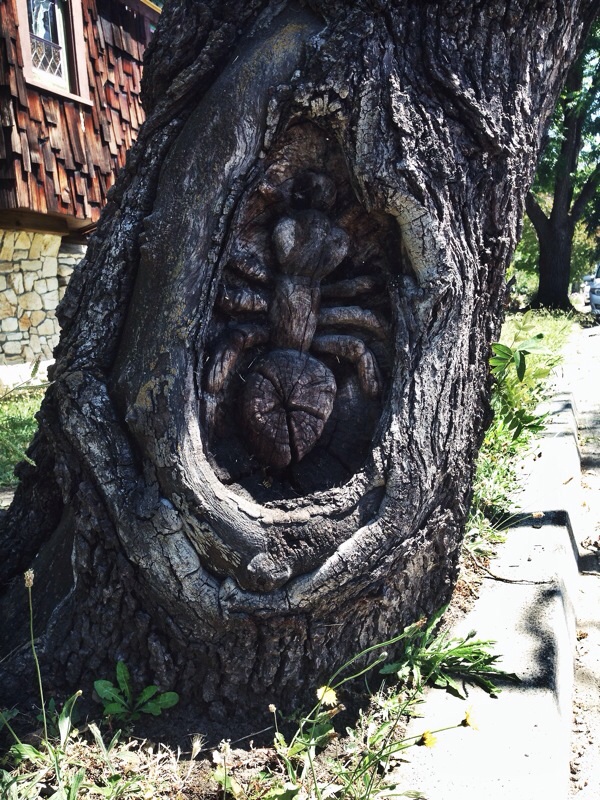 On our weekend mornings my husband and I walk through the neighborhood to the local diner, enjoying the shade the trees provide. There's a pair of doves that lived in a tree next our parking spot behind our house, you saw what happened to that. Squirrels running here and there, looking for nuts, sometimes chasing other squirrels. All in all it's a beautiful neighborhood to call home. 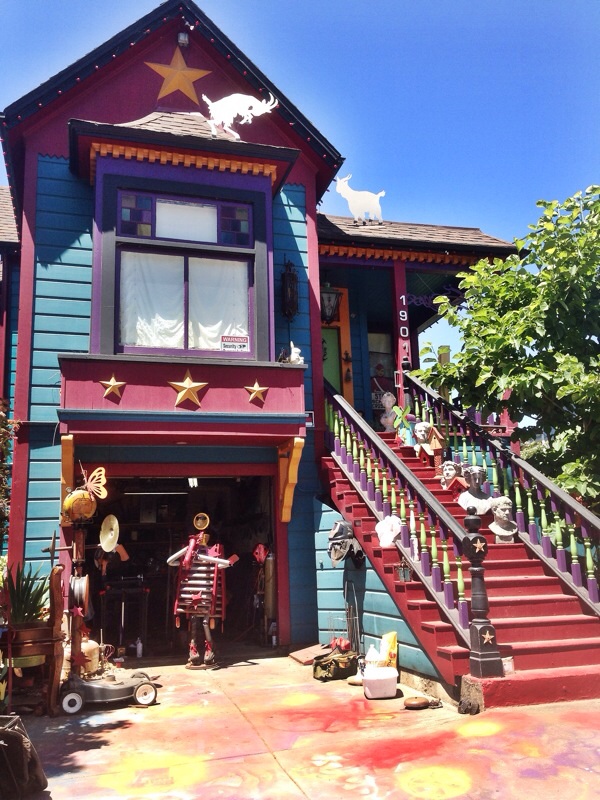 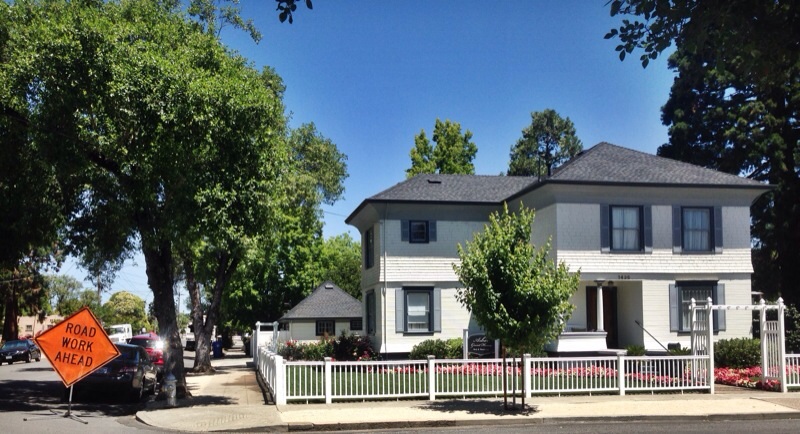 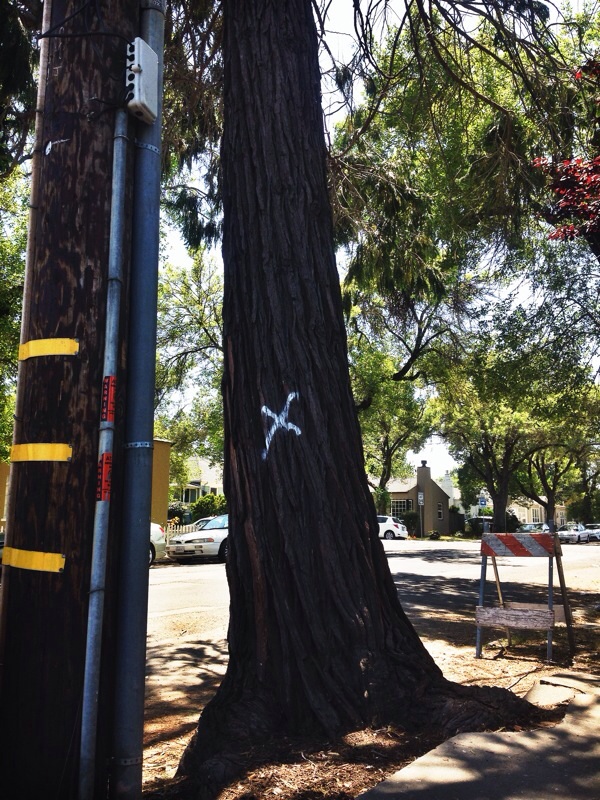 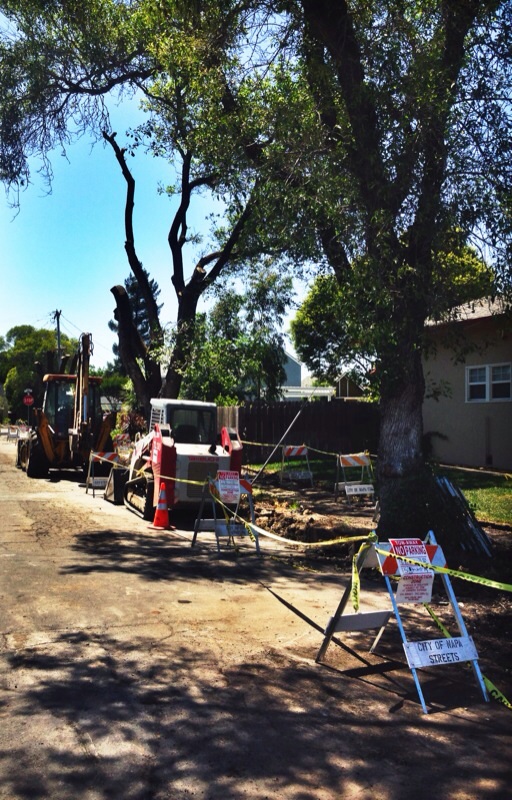 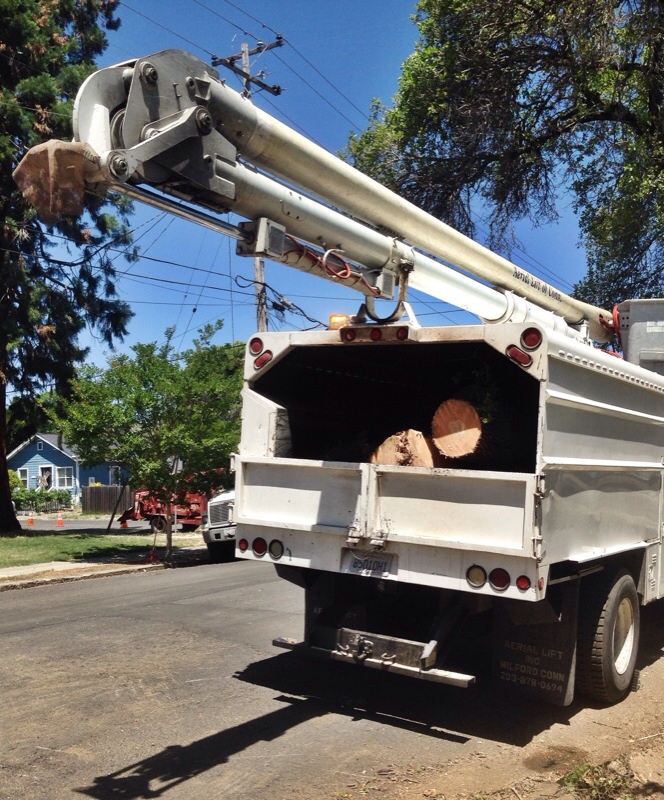 A few of the trees have messages attached: 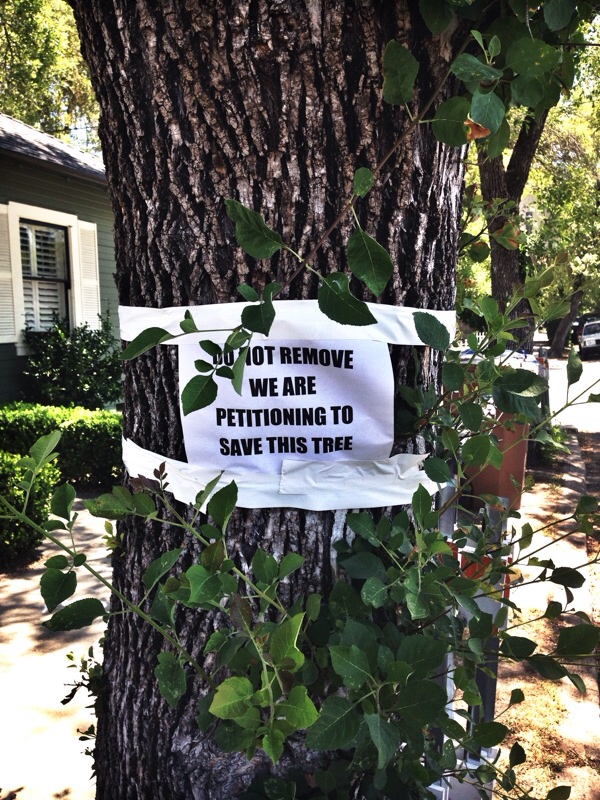 The first department I called was the public works department, since the trees are being cut down for sidewalk replacement I figured that would be a good place to start.

Well, I eventually put my proverbial foot down and asked to talk to whom ever was in charge of the tree removal project, it just so happened to be the parks department. I voiced my concerns to "the man" and it appears I am not the only one questioning the city's new activities.

I discovered that the goals of the project are to repair damaged sidewalks, improve access for people with disabilities, improve drainage, re-pave the streets and address needed maintenance for trees in the area.

Here is a portion of the reply I received from the city:

There are 590 trees in the neighborhood. Of those, 370 trees have been evaluated and are in healthy condition and will remain. The majority of the remaining 220 trees that have been identified for possible removal. Arizona Ash trees are the majority of those species. To date we have removed approximately 30 trees in the neighborhood. Not all were Ash trees.

Tree with stability issues, significant root conflicts with sidewalks and utilities, trees with decay, and trees in severe decline have been removed. Trees will be replanted in these locations once the new sidewalk is in place and paving is complete.

Due to the response from concerned citizens in the neighborhood the city is now removing the sidewalks first, then will determine if the "trees are healthy" by looking at the roots. If they are indeed healthy, and don't pose any problems as far as the sidewalks are concerned then the trees will not be removed.

The city is also replacing the trees where they don't impact the sidewalks, and if they do, the city has offered to plant another tree anywhere in the lot of the home where the tree was removed.

We do our best to retain trees that we know are strong specimens and will survive after this type of work is performed around them.

Work performed in the root zone around the trees can accelerate their decline and impact their health. If roots need to be removed to install new gutter to improve drainage, repair sidewalk or add an ADA ramp at a corner, we have to evaluate how that will affect the tree and if it will become a hazard as a result.

While its understandable that the roots of some trees will continue to destroy sidewalks, meaning people can fall or trip, not every single tree marked for destruction impacts the quality of the sidewalk.

I'm glad to see that a small difference was made, a few trees have been saved by concerned citizens speaking their minds and letting the city know it's unacceptable to cut the trees down based on pure laziness, even if it does makes it easier to pave a sidewalk minus a tree.

I will continue to monitor the progress of the tree removal and if I see questionable activity, my voice will again be heard.

If you see something going on in your neighborhood or city that upsets you, or that you don't agree with, speak up, tell all your family and friends, attend city council meetings, let your voice be heard. While you might not always get what you want, it never hurts to give it a try, the outcome may surprise you.

You hit this right on the head. The song "Big Yellow Taxi" by Joni Mitchell in the late 1960's put not only that line out there, but rest of it goes like this: "Don't it always seem to go...that you dont know what you've got till it's gone? They paved paradise, and put up a parking lot."

Big developers visit sites that we consider pretty or beautiful with wonderful nature...and they go "Wow! If all these trees werent here...it'd be a great place for a condominium!'

Then POOF....the trees are gone, and in their place is a sign "NOW LEASING."

Right! Big Yellow Taxi is one of my theme songs as of late, lol.

My city is considered a "tree city" but they've been chopping them down recently like it's the thing to do. There are ways to work around trees, especially really old ones.

My heart breaks for the Redwoods that use to line the school, I think of the Native Americans that would have used them as shade prior to settlers arriving. Something that old should be treated with respect, not cut down out of pure convenience.

When you loose something, that's when you truly know what you had, what you were previously taking for granted, as if it would always be there.

posted on Jun, 18 2014 @ 02:54 PM
link
Some trees in my home town ( quite many of them ) were removed due the fact that those trees were old and parts of them were partly rotten and they could be dangerous. I know it wasn´t light decision back then ( they planted new trees to same places ). Trees can also have diseases which makes them weak.
Have you asked why they did such an decision?

Those were some nice solid trees, the wood will probably be sold way below value to someone the head of the city knows.

Maybe the Mayor will get some furniture out of the deal.
edit on 18-6-2014 by rickymouse because: (no reason given)

They are doing it to repair sidewalks and install ADA ramps. However, some of the trees marked for removal aren't impacting the sidewalk.

It's good to see that the town listened to the residents, seeing tree cut down that does not need to is frustrating.

When I first move to this country, the area I lived in had many trees, the city cut them down because they had diseases, sick trees had to be removed. They also replanted a different kind of tree. Before the street was lined with big beautiful trees, lots of shade and with no air conditioning this was very welcomed. Now the trees are very little.