I am from Michigan. We went to this cabin our family friends owned in Huntsville. Our group consisted of two adult women and four children. I was 12 at the time. If you Google map the local, you will see that it is surrounded by hundreds of miles of timber and undeveloped land.

This cabin set empty all year round unless occupied briefly by our family friend and or their guests. Aprox 100 feet from the cabin door stood the beautiful lake. The entire area was surrounded by old growth forest and there wasn't a neighbor within 10-20 miles. Town was roughly 15 miles away so we were secluded. We arrived late night, took in our gear and slept. Upon seeing the light of day, I hurriedly gathered my little tackle box and fishing pole and headed out the door towards the lake. I was excited to fish, being from the city I didn't get to fish often. Everyone else in the cabin was still asleep so I estimate the time around 6:00 6:30.

As I walked down the path towards the lake, with the cabin at my back.. I experienced the most powerful sensation of being "watched" I have to this day ever felt. The hair on the back of my neck stood up. It was so pervasive, I instinctively turned around fully expecting to see someone directly behind me! I turned and looked, the path behind me was empty.. but my attention was immediately drawn to the large boulder that jutted out of the ground ( approximately 6-7 feet out of the ground) next to the cabin. That's when I saw it... its was peeking out from the side of the boulder!

Now mind you.. Ive camped up North in the Upper Peninsula of Michigan all my life. I have seen bears, wolverines, bobcats and all kinds of creatures. This was different. I stood there and just stared at what I can only explain as a large dark face with big shiny eyes staring at me. It moved slightly behind the rock, maybe hoping I hadn't seen it. Oh but I did.. it peeked back out and stayed that way for a minute.. probably wondering what I was going to do next. I held my ground, I wanted to see what this thing was!!! The forest line was about 20-25 feet away on all sides so it wasn't gonna slip away easy. It must have realized that as well, because no sooner did I think that.. it just stood straight up.

The top of the boulder came to about the top of its stomach. Its chest, shoulders, head and easily cleared it. I estimate it between 8-9 feet tall! It was massive! Its head looked small in comparison to its shoulder width. They had to be about 4-5 feet across. Heavily muscled yet lean. The hair wasn't very long, maybe 4-5 inches all over. Dark brown. The face was human looking. It reminded me of an aborigine, like from Australia. Hair covered except around the eyes. The skin was a medium gray color. It had a very pronounced conical shaped head with the hair extending all the way to brow ridge. Eyes were black and shiny. I could see them move as he looked me over. Mouth/lips wide and thin.

And there we were... neither of us moved for about 20-30 seconds. I think we were both in shock. Amazingly, I was not afraid at all at that moment! I did not feel threatened nor was its posture aggressive. Its did not make any sounds.. or show its teeth... just stared. Then, it just turned... without taking its eyes off me, and took three steps and it was in the timber line. Its "steps" were weird and very long. It kinda hopped-stepped, while swinging its arms. It cleared open grass to that tree line in a split second.. but the way it walked and swung its arms looked like slow motion. Graceful, yet weird. As it went into the forest, it started breaking branches, trees it sounded like as it made its way deeper into the woods. That was the only time I was scared. It sounded like it was tearing the whole forest down in there. Wood was snappin and cracking like gun shots it was so loud. In retrospect.. I think it was doing that so I wouldn't follow it... and I didn't!!!! I ran back up to the cabin and woke my Mom up and told her what I saw. There was no misidentifying that! It was Bigfoot!! I will never forget that encounter.. and I remember it as if it was yesterday. Thanks for reading my sighting.


Below is a drawing I did of the creature.... truly looked more human than ape. 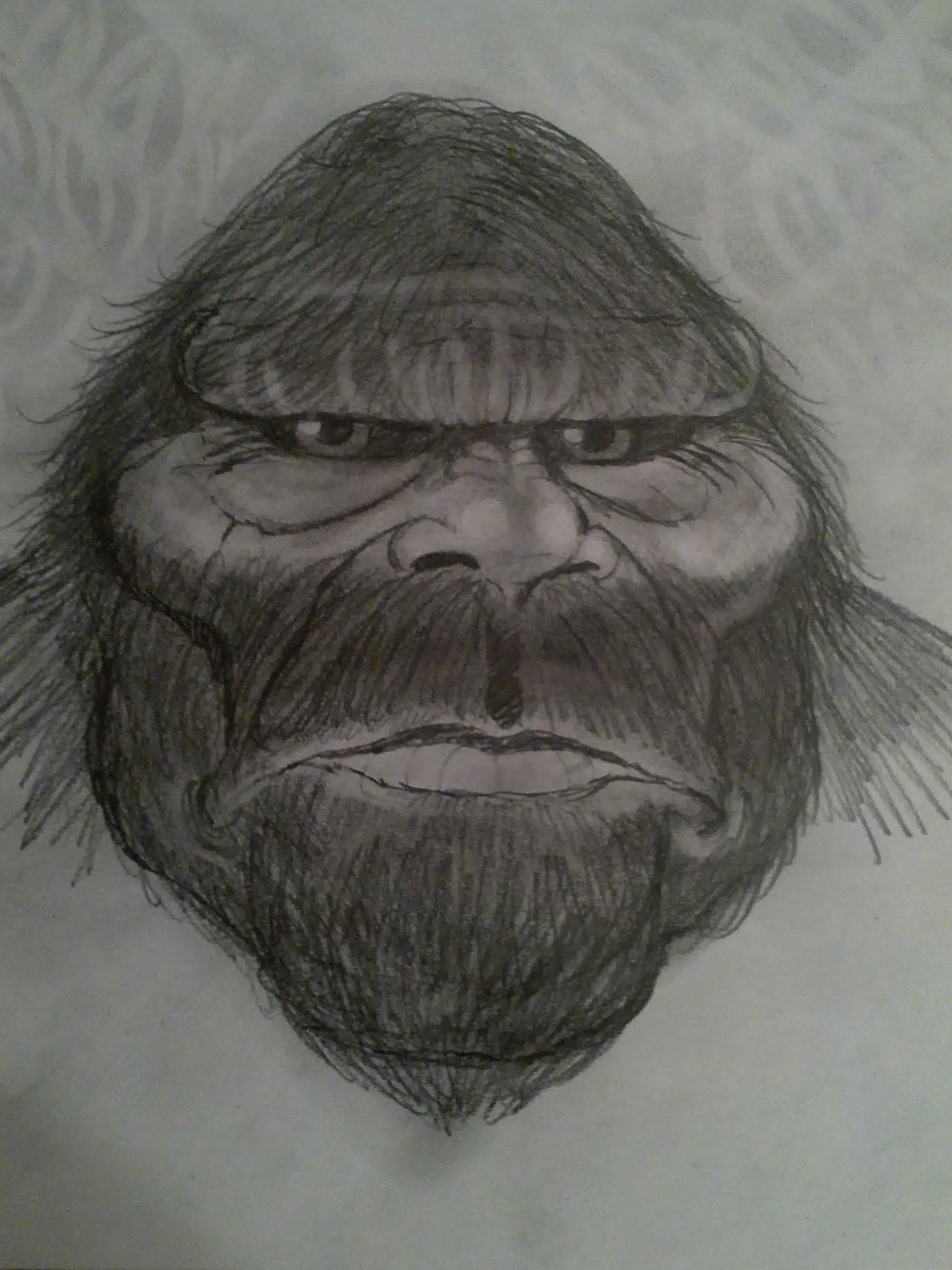 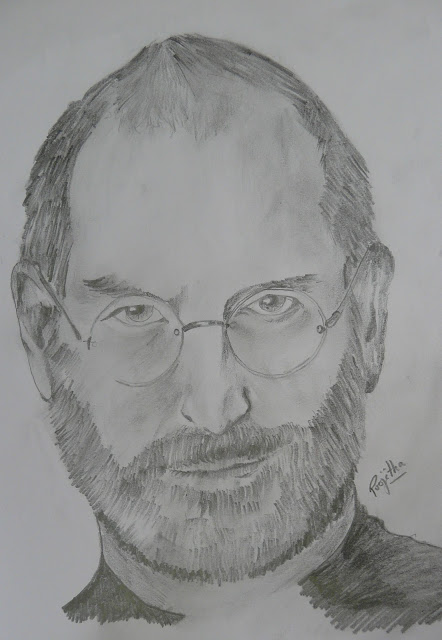 I believe you also and I am a little envious. I would love to have an encounter like that. I've had too many weird things happen to summarily dismiss strange occurrences of others. Unless they're of the chemtrail variety, of course.

Your drawing looks like many guys I have seen riding Harleys.

posted on Jun, 18 2014 @ 10:27 AM
link
a reply to: Alter-Ego
Whether it happened or not - excellent Telling!
I am assuming that no-one investigated to see if footprints were left in its path from the boulder to the tree-line...?
And - did anyone-else believe you? (meaning - did the whole group just continue the camping trip with no second thought/s?)

What year did this take place and how old were you?

Are there people still living, who were at the cabin, and can corroborate that you told the story at that time?

Did you look for any evidence after the creature left (e.g. footprints, hair, scat, etc.)?

If you found any, did you record or preserve that evidence in any way (e.g. photos, videos, samples, etc.)?

Did you ever hear about other people having sightings in that general area?

Again, great story. And thanks for sharing it.

What year did this take place and how old were you?

Are there people still living, who were at the cabin, and can corroborate that you told the story at that time?

Did you look for any evidence after the creature left (e.g. footprints, hair, scat, etc.)?

If you found any, did you record or preserve that evidence in any way (e.g. photos, videos, samples, etc.)?

Did you ever hear about other people having sightings in that general area?

Again, great story. And thanks for sharing it.


* Yes, everyone who was there is still alive. The sighting was kept from the other children as to not scare the crap
out of them.

* As for looking for prints, hair .. no I did not. I just saw that thing right in my face... I did not need any other proof
nor did I even think to look for it.. I did peer into the woods where it disappeared and saw trees that were broken and twisted.

* Later that week I did meet some locals (an elderly couple) and told them what I saw.. their reply caught me off guard.
They were not phased in the least and even said.. "We see em from time to time up here.. they wont hurt you, they are just curious.."

Thank you all for your replies. This is far more than a story to me... I was there, I saw it plain as day and I will never forget it.


I respect your opinions and view points, Id probably feel the same way if it didn't happen to me.

I believe you. I had my own experience at 14, so not much older than you were.

My question is: why do others think that those (like us) that have seen whatever "Bigfoot" is, would want to lie? Just so we could be called silly, crazy, on-drugs etc...you certainly don't have much to gain by lying about an encounter with whatever these creatures are or are not.

There is always fear of the unknown, and sometimes that fear is groundless.

Chat your heart out about it. ATS seems like a fairly safe forum to do just that.

So you have no vivid memories of any event in your past?

posted on Jun, 18 2014 @ 11:23 AM
link
Wow that must've been pretty amazing. I'd say better than seeing a ufo, since you saw a real living being. It seems they have some very deeply held, perhaps even "religious", beliefs about us... perhaps going back a long time. Maybe they are Earth's original people and we are intruders. Or ET hybrids.

posted on Jun, 18 2014 @ 11:27 AM
link
a reply to: Alter-Ego
Did you look for prints later? I see so many kinds and we have seen prints in the redwoods, but they look very human just large, not much bigger then my husbands size 13 shoe.

posted on Jun, 18 2014 @ 12:04 PM
link
I think I may have caught a partial glimpse of one. Just a section of upright torso running through dense thicket, and then jumping into the bayou. I would estimate it would have been 4 or 5 feet tall. Covered with coarse black hair. I have tried to rationalize it as being a wild hog that was stood up on its hinds by the thicket, but that is a stretch. This was in coastal Texas.

I don't know if anything extraordinary ever happened to you but when it does, you remember every detail as though it is burned into your mind in slow motion.