What This Girl Did To Protest ‘The Australian Shark Cull’ Is Breathtaking!

posted on Jun, 18 2014 @ 04:16 AM
link
In protest of the cull on sharks in Australia model and conservationist Hannah Fraser dances without protective gear with Tiger sharks..

Let’s end the war on sharks! In a performance protest against the Australian shark cull and the global slaughter of sharks, a woman risks it all to dance on the sea floor with swarms of tiger sharks up to 17 feet long without any dive or protective gear. And the message, “End the War on Sharks” resonates throughout this piece…

Teaming up with Emmy Award winning cinematographer and photographer Shawn Heinrichs, and the world’s leading authority on interactions with large “predatory” sharks, Jim Abernethy, the trio embarked on a dangerous mission, the likes of which has never before been attempted. 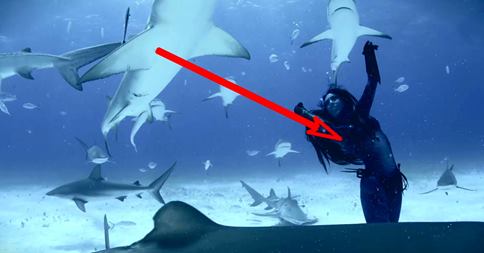 Well in my eyes they achieved their objective. Hannah Fraser dances with these graceful and magnificent creatures and highlights the absurdity of this knee jerk response by the Australian government..

And good on her, although it's not as dangerous as they may want you to think.

Sharks aren't particularly interested in humans at all, let alone submerged with them, it's when we float on the top in white water in black wetsuits looking like a juicy seal, is when they are interested in us.

While this may have some artistic effect, I need to point out that there is no "Australian" sanctioned shark cull. There has been a program recently introduced into Western Australia as a direct result of people being taken by sharks.

Sadly I believe, once again, this is targeted at the wrong people.

If this had been done in Indonesia and shown to Indonesians, then I'd be well impressed.

ETA: MUCHO IMPORTANTE, please flag this thread if you want people to get an education about this topic.

Is targeting large sharks and killing them not a shark cull...

posted on Jun, 18 2014 @ 04:38 AM
link
Nice film work. Her message is pretty much a dime a dozen, but it's nice to watch. I'm honestly more intrigued by the song than any cause. Sad? probably, but I'd like to know the song title, a cursory skim through the comments briefly didn't yield a name, unless I missed it. Anyone? Bueller?

Relentless pursuit of any and all types of shark is a cull, particularly when the shark is sacrificed for just the fin.

You know, it really pisses me off when things like this happen. When the famous and beautiful inflict themselves on what is a really serious problem, they manage to divert the real focus time and time again.

I dare you to research shark fining and tell me this is an issue targeted properly.

posted on Jun, 18 2014 @ 04:42 AM
link
I've dove with sharks quite a number of times, both in the wild and in tanks. They generally are more afraid of you then you are of them. Humans are not their natural prey, and since you blow bubbles, to them you are more akin to a dolphin, which they avoid. Yeah, if you corner one, or get one that is acting agitated or being territorial, you can get into trouble, but usually they either ignore you or run away.

The majority of attacks are misidentifications, often due to poor visibility, where they think that a part of your body is a fish. That is why most attacks happen in shallow water, where they only catch a glimpse of flesh in the stirred up water. They don't know that its your arm or leg, to them it looks like a fish flashed by. Also the instance of human attack increases in areas where their natural prey has been depleted.

IMHO, there are other things in the ocean that I'd be a lot more afraid of running into than a shark, such as a group of Hembolt Squid.

BTW, the highest number of human attacks in the world is in Florida (specifically Volusia County FL).

BTW, the highest number of human attacks in the world is in Florida (specifically Volusia County FL).


^^ Quite true there, though I've swam with sharks before down here without incident. They usually are passing by rather than stalking you. One recent trip to the beach had a shark (Nurse, I believe) weaving it's way through the throngs of people in the water. Very few even noticed, and it carried on down the coastline without issue. My mother doesn't ever care if they're in there with her, and she had a literal eye-to-eye meet & greet with one at the beach when I was a kid. She was snorkeling down the sand bar, off into the deep between it & shore, and one swam past her. Turned back, circled her, checked her out up close, and left. The only time she was ever really unnerved was when one body-slammed her closer to shore and knocked her on her butt.

posted on Jun, 18 2014 @ 05:42 AM
link
Strange how sharks do not have one single bone in their bodies, its all cartelidge! (might not be the right spelling)

I am 100% positive we are all grateful her swim wasn't during her time of the month or natural cycle. The outcome may have been much worse. She may have been able to freely swim with dozens of carnivorous creatures to promote an idea, albeit a dumb way to risk life and limb...but I don't believe that risk is necessary to try and stop a corporation or company from culling sharks. There may be much better ways than this artistic film to try and stop the process.

But to each, their own.

As well all know, likes and #tags on sites have solved the following:

Now I cant put my hand up and say that I have ever danced with sharks, I have shared a chat over a drink down the pub with them to show the plight of the national English pass time (drinking in pubs) and that was a close shave. NEVER buy a round for a shark, when he buys, its 2 pints when you buy he MUST have a triple vodka can coke. What a d*ck.

That aside, nice video but cant see it doing much

originally posted by: havok
While I enjoyed the movement of an attractive woman dancing with sharks....

I am 100% positive we are all grateful her swim wasn't during her time of the month or natural cycle. The outcome may have been much worse.

There was a comment on the article that also mentioned menstruation and the sharks. Im a little puzzled why this is a thing?

So, I did a quick google search "can you swim with sharks while on period" and got this hit from a scuba diving site and found out the following:

Can you dive on your period? Yes! Many female scuba divers may be worried about shark attacks, bleeding underwater, and other considerations when diving while menstruating,...
Thankfully, sharks are not going to smell your blood and come chasing after you if you dive while menstruating. Studies have been conducted to observe sharks' attraction to human blood. Sharks appear curious, but not aggressive when human blood is in the water.

Plus they mentioned something about sharks being attracted to fish gastric fluids rather than their blood.

Decompression sickness is a thing though, it is twice as likely to happen during menstruation. So I suppose we can be grateful the attractive lady was not menstruating or she may have gotten sick!

The point of this video, in my mind, is to get away from scary ideas about sharks, and the comments about periods with some mad feeding frenzy we didn't have to witness... well that's another scary shark idea that has no basis in reality.

posted on Jun, 18 2014 @ 01:18 PM
link
a reply to: defcon5
so true , the attacks in egypt was because the instructors had a pouch on their hip and fed the sharks from them

when the sharks attacked the swimmers that is the area on their bodies that was bitten .

the sharks understood that that was the place where they would get food , they where not attacking people per sa they were looking for the pouch