posted on Jun, 18 2014 @ 02:06 AM
link
We all should know by now that far flung places in the world were actually stitched together even in the most distant pass via trade,conquest,wandering scholars or religious figures most easiest to recognize are trade items and evidence of conquest,the last two will take sometime to uncover since no civilization takes on wholly the religious or philosophical concept of another it always tries to infuse older home grown concepts with the newly imported, this can be unrecognizable especially if one do not expect to find much of a connection between far flung geographical areas below is an image of the Meroitic/Kush.ite God Apedemek, although the god 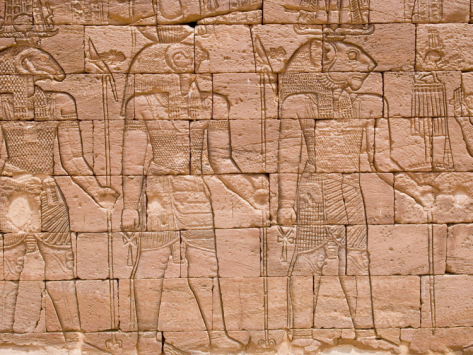 Apedemek before the makeover.
Apedemek is a Nile valley God of war he was previously shown with the lion's head and two arms but here all of a sudden he is multi armed multi headed looking quite Indian. 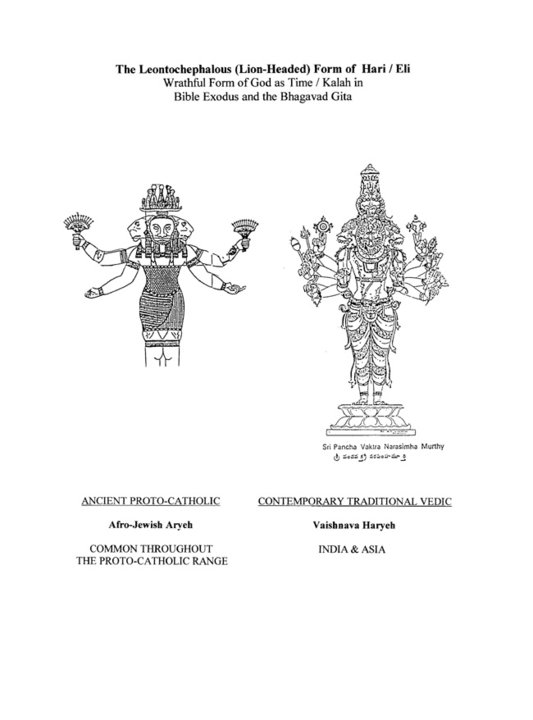 Comparison with an Indian God 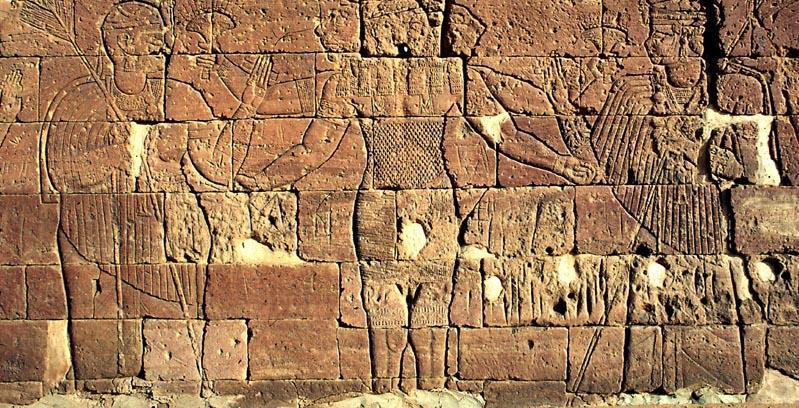 Nubian Queen Amanitore
1 AD - 20 AD
The Apedemak Temple at Naqa, Sudan is adorned with reliefs depicting the imposing figures of its builders, Queen Amanitore and King Natakamani doing homage to the three headed Nubian Apedemak lion god and crown prince Arikhankharer. Apedemak's function was that of god of war, which could be clearly traced in his appearance. In the scene of adoration, he is represented in a human shape with a lion's head. Apedemak's doubling of hands touches the king and queen with one pair of hands and at the same time another one is holding the bunch of plants. The worship of this god as a god of fertility stemmed from his being compared with the king responsible for the welfare of his people. The position of the two pairs of hands symbolizes the equal measures of good deeds which the God renders to the king and queen. This royal pair, who lived at about the time of Christ, resided over a Meroitic Golden Age, as the remains of numerous buildings bear their names. In the decorative scheme of this temple the figure of the queen appears just as prominently as that of her husband, providing a clear indication of the unusual status accorded women in the Meroitic monarchy.
The ancient kingdom of Ethiopia corresponded not to what is Ethiopia today, but to Nubia, the southern part of Egypt and the northern part of the Sudan. The king of this kingdom was regarded as too sacred too deal with the secular functions of government and these were managed on his behalf by the queen-mother, who bore the title "Candace."
wysinger.homestead.com...

The first recorded reference to Maahes is from the New Kingdom. Some Egyptologists have suggested that Maahes was of foreign origin; indeed there is some evidence that he may have been identical with the lion-god Apedemak worshipped in Nubia and Egypt's Western Desert.

As a lion-god and patron, he was also considered the son of Ra and of Bast, the feline war goddess and patron of Lower Egypt as well as Sekhmet, the lioness war goddess and patron of Upper Egypt. Since his cult was centred in Per-Bast (Bubastis in Greek) or in Taremu (Leontopolis in Greek), he was more known as the son of Bast. As he became a tutelary deity of Egypt, his father was said to be the chief male deity at the time - either Ptah, or Ra who had by this time already merged with Atum into Atum-Ra. In his role of son of Ra, Maahes fought the serpent Apep during Ra's nightly voyage.

Considered to have powerful attributes, feline deities were associated with the pharaohs, and became patrons of Egypt. The male lion hieroglyphic was used in words such as "prince", "mashead", "strength", and "power".

Apollonius certainly visited the Gymnosophists or naked philosophers in Ethiopia [actually Meroe aka Kush] and according to Eusebius “In the reign of Amenophis III a body of Ethiopians migrated from the country about the Indus, and settled in the valley of the Nile”
Mind you here he is talking about black or dark-skinned Indians settling in Meroitic Kush,even earlier Ashoka , Buddhist king of India, sent out missionaries to Syria, Egypt, Greece and parts of Asia Minor about the 3rd century B.C .

posted on Jun, 18 2014 @ 03:28 AM
link
a reply to: Spider879
Great thread and well presented. S&F Appolonius is for me one of the most interesting men of the ancient world and as you say, he travelled so far in order to learn. Many and I certainly believe he could haved been the Christ figure as until we find records of Christ actually somewhere where they should be eg in the Roman records of that time. One has to remember that Egypt was made up of a number of peoples, the Numbians certainly came from lower down in Eastern Africa.

I do find it strange that so many people think that the ancient people did not move around and merely lived within either their own townships or walled cities or only moved if they wanted to trade. Man's curiosity and urge to roam has nev er left him. He also had to move when it was forced on him and his supply of fresh water dried up.

The two Gods are strikingly alike and if one goes back to the idea that pagan people had a number of differend gods depicting different characteristics of man's personality then somewhere along the stage of developing these gods, there would be links to the most feared and king of the animals, the lion, especially the symbolic roar of war. We even have lions today in country's symbols and emblems, Wales has a dragon.

Although we don't think in the same way (to a great extent as we have a different psychology), and don't relate to the environment in the same spiritual way especially as most livein concrete jun gles today,the ancient memories we all
carry come back to us in symbols.

People often forget that the Iranians are not an arabic people, they are of Indian extraction which is hidden by the shared religion of Islam, which produced its own magnificent designs and depictions so we know that people travelled over huge areas and settled and merged and armies moving through areas took people up and simply took them back to where they came from as spoils of war. If famine occurred off went the people in order to survive.

I don't see anything strange that the similar depictions of the same principle should occur especially as Egyptian and Indian cultures were the world leaders at on point in our historic record.

There are many more similarities in their myths and religion. The blue lotus for instance.

originally posted by: zardust
There is the Indian Kush, and the African Kush. Are they the same people? I think so.

There are many more similarities in their myths and religion. The blue lotus for instance.

20) MAIDEN (QUEEN) KUNTI, mother of Yudhisthira (duplicate of Christ), described in the 'ancient' Indian epic Mahabharata. In the Indian sources Virgin Mary reflected also as the Goddess MAYA, who suckled Buddha (another duplicate of Christ)


www.chronologia.org...
And I read a book a long time ago that during the war between the British vs the Madhist forces of the Sudan the auxiliary Indian lancers of the British would go into the temple of Hathor to worship that goddess, keeping in mind Hathor is represented as a divine bovine while Hindus got a thing of cows.

My belief is there was a time when wise men sought out each near and far on a quest for knowledge going way back before the Greeks and Romans this is reflected in the hero gods who showed-up dropped some knowledge, and wander off sometimes promising to return.