Hillary Clinton claims she had doubts about the "Benghazi" video !!!

Now Hillary says she had "doubts" about that famous video that she initially said was the cause of the Benghazi attacks of September 11, 2012.

In fact *SHE* now has the Gall to insult everybody with this masterpiece ---> "There's no doubt terrorists were involved."

The Administration is going absolutely nuts with lie after lie to cover the lies told.

Hillary Clinton, in a sit-down interview with Fox News, suggested Tuesday that she had doubts from the outset about whether the Benghazi terror attack was triggered by a protest over an anti-Islam film -- though her State Department pushed that narrative for days.

"This was the fog of war," Clinton said, when asked about the administration's controversial public explanation of the attack.


Clinton claims she had doubts about video explanation after Benghazi strike

To even utter that statement makes her look like a complete lying, vapid, horrid little woman. I'm not shocked. The truth about Benghazi will be taken to the grave by more people than we can even comprehend IMO.

To be labeled as such a smart woman... I think she may be catching Joe Biden's "Foot and Mouth" (maybe even hoof and mouth) disease.

Based on a C-SPAN video of their six-minute exchange, here is a transcript of what Johnson and Clinton said during the Senate Foreign Relations Committee hearing on Jan. 23, 2013:

Clinton: Well, first of all, Senator, I would say that once the assault happened, and once we got our people rescued and out, our most immediate concern was, number one, taking care of their injuries. As I said, I still have a DS [Diplomatic Security] agent at Walter Reed seriously injured -- getting them into Frankfurt, Ramstein to get taken care of, the FBI going over immediately to start talking to them. We did not think it was appropriate for us to talk to them before the FBI conducted their interviews. And we did not -- I think this is accurate, sir -- I certainly did not know of any reports that contradicted the IC [Intelligence Community] talking points at the time that Ambassador Rice went on the TV shows. And you know I just want to say that people have accused Ambassador Rice and the administration of misleading Americans. I can say trying to be in the middle of this and understanding what was going on, nothing could be further from the truth. Was information developing? Was the situation fluid? Would we reach conclusions later that weren’t reached initially? And I appreciate the --

Clinton: With all due respect, the fact is we had four dead Americans. Was it because of a protest or was it because of guys out for a walk one night who decided that they’d they go kill some Americans? What difference at this point does it make?

Linky
This is a True Politician, a born liar that believes her own lies!!! 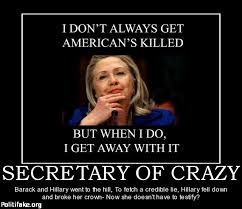 In the "good old days" she refers to politicians gave the American people an explanation in a reasonable amount of time after an event because they really were connected to the people.

Her waiting two years and I have to buy her book to understand her decisions is an insult of my intelligence and extremely rude.

She's sticking out like a sore thumb. Who else is 'running' for President in 2016? Right ... nobody we can name. So why now? This sounds conspiratorial to me. She's not going to win, based on her presently well-known reputation. What then are the political spin-masters up to? Are they simply trying to fatigue the folks willing to trash her one more time?

I know the Dems can put together a better candidate. If they want more attention they could announce 0bama for a third term -chuckle- or for a crown even.

As for the BS video that caused Benghazi ... I could care less. I'm more interested in knowing the entire administration's reasoning behind the deflection. You know they spun the story for a reason. Everybody knows there's terror in the world ... and that it ain't going away ... so what's up with the ruse? Does anyone really buy into the whole, "0bama may have lost the election otherwise" theory.

I've got a sneaking suspicion the GOP knows and they're gonna bombshell us with the answer pretty soon. The "I" word is getting thrown around and not with an off-hand. Is Hillary paying her DNC dues?

posted on Jun, 18 2014 @ 02:18 AM
link
i take great pleasure in knowing that she will die sometime during my lifespan.
allahu akbar

I do not know man, Hilldog and company are of the same lot as Kissinger/Brezinski although lower on the ladder of control. I am sure they feast on blood in the same manner, I mean jesus christ Barbra Bush is still alive and terrifying as ever!


yeah, i caught that when watching the interview.

she also said the same dam things as the other interviews shes done.

"...learn from our mistakes so it won't happen again." :rolleyes:

she make my blood boil, she is so fake.

The worrisome part is not Hillary but the 40% of the people that say they will defiantly vote for her. She knows she can lie about anything and 40% don't care...Obama has already bought and payed for the Democratic base, its already in place for Hillary ??

Of course this is an attempt to rewrite history, create misdirection and "reinvent" herself.

As much as I abhor this vapid, lying, moronic person, I think that she handled herself much better than I thought she would. At least she actually went on Fox News.

1 - "you have to take both ideas at the same time"...so is she saying that congnitive dissonance is a GOOD thing, and is either suggesting, or recommending it as a preferred mode of operation?

2 - "losses we incurred" ....odd choice of words....shouldn't it be "losses we sustained"? ..that choice of wording suggests that the losses were the consequence of some causative action.....either that, or she's a moron, who doesn't have a firm enough grasp on the english language...which would be kinda sad, given what her job was..

3 - "i would only be seriously disappointed in any president, if i thought, that in some way, he was either ignoring, or undermining the national interest. and i never saw that in any of those three men(b. clinton, g.w. bush, b. obama)" Holy s**t, is she a good liar, or what? never thought any of them were ignoring or undermining the national interest, lol...again, either stupid, full of s**t, or f**king nuts......though, i still reserve the possibility that she could be all three...

right, so here we have it....the MASSIVE backpedaling campaign begins, on the lead-up to another presidential run..

He said it second... But Hillary definitely said it first.