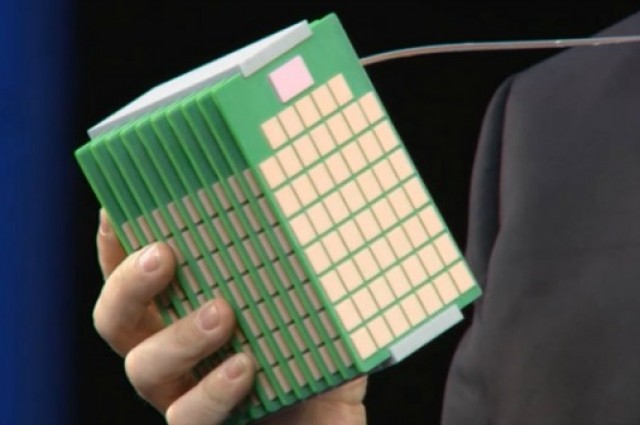 In order to handle this flurry of information it uses clusters of specialized cores as opposed to a small number of generalized cores. The whole thing is connected together using silicon photonics instead of traditional copper wires, boosting the speed of the system whilst reducing energy requirements. Furthermore, the technology features memristors which are resistors that are able to store information even after power loss.

The result is a system six times more powerful than existing servers that requires eighty times less energy. According to HP, The Machine can manage 160 petabytes of data in a mere 250 nanoseconds. And, what’s more, this isn’t just for huge supercomputers- it could be used in smaller devices such as smartphones and laptops. During a keynote speech given at Discover, chief technology officer Martin Fink explained that if the technology was scaled down, smartphones could be fabricated with 100 terabytes of memory.

HP envisages a variety of future applications for this technology in numerous different settings, from business to medicine. For example, it could be possible for doctors to compare your symptoms or DNA with patients across the globe in an instant and without breaching privacy, improving health outcomes.

If you can't watch the video you will miss a lot of information. To be honest with you some of it went over my head. So the best I can do is give some cliff notes.

This system will completely innovate computing systems will be fast. The processing, moving, and storing of information is unheard of. They are having redesign the OS for this to manage the petabytes (1 PB = 1000000000000000B = 1015bytes = 1000terabytes) of information using less energy.

Clod computing is even being reworked. This will also change your ability to access wireless networks. I on the down side they are talking about storing all information and being able to process it at blazing fast speeds. (the NSA is drooling) They are also talking about scaling down the tech for smartphones to where you could store 100 terabytes on it. The computer I am on now that I built will be scrap.

Seems like Moore's law may actualy be re-writen because this is more than a small jump in technology. They are saying with this new tech they will be storing and processing at the atomic range.

Like I said some of it went over my head mostly because I cant imagine a computer going that fast.

BTW they named it the machine. Not very original but I just watched the movie named the same last night and this system has me thinking about AI. Skynet???

Speaking of skynet google just partnered with a new company called skybox and planet labs that promises to bring google maps into real time with 90 second clips. Where you could even track your home and see if the kids took the car for a joy ride.

Well this is a lot of info hopefully everyone can watch the video. So what do you think ATS?

Is that one giant block of RAM? That thing doesn't look like it'll fit in a standard computer tower. But I'm sure they'll chop it in half by 2020. And then it'll be another 10-15 years before it's available to the general public. Until then, it's a millionaire's toy. Or just a prototype for the amusement of scientists.

That block is pretty much everything aside from the processor. They use fiberoptics to the chip.

They say it will be ready for the general public by 2020, but they will be releasing it to other entities years before that.

And yes it is scalable.

posted on Jun, 17 2014 @ 07:59 PM
link
This is amazing! Amazing find! It's going to be the first public nano computer available and I guess it's going to be from HP. I just can't help but think that all this is, is the first stages of nano-tech. I'm only half way through, but I just had to reply when I heard him talk about ions. This is way beyond me but I am going to get into this one. Ok, now to finish watching the rest of this. Just amazing stuff, technology never ceases to amaze me, and anyone else following this knows this is starting to turn into a freaky show.

Is that one giant block of RAM? That thing doesn't look like it'll fit in a standard computer tower. But I'm sure they'll chop it in half by 2020. And then it'll be another 10-15 years before it's available to the general public. Until then, it's a millionaire's toy. Or just a prototype for the amusement of scientists.

Those white boxes are the memory - they communicate with each other directly using light, so they won't need to be wired together like typical supercomputing systems that need aisles of racks of cabling to guarantee fast communication between memory and CPU. Current supercomputing systems are like a sprawling suburban metropolis comprised of thousands of office blocks with car parks, freeways and interconnects. The CPU cores are like downtowns office blocks, CPU cache memory is expensive like underground carparking, and communication infrastructure is like the freeway and surface road system.

Now imagine if everyone could just communicate from their office by laser and didn't need to commute. Then you can just stack everything on top of each other like some mega-city. That's what they have there.

memristors!
I wonder if we can buy those, I can think of many uses!

I suppose that it would be wrong to say that the average person would have absolutely never, even have a need for such a 200Tb smartphone, but that won't stop them from being put into the marketplace. Honestly, who is going to NEED that much power in a handheld?

(well, to rebut myself, I can imagine such a device could be programed to be an instant two-way translator of every language in the world, putting the transposed words of each language into the proper conversational context for the other. An old sci-fi dream come to life, no one would need to bother to learn another language.)

originally posted by: Aliensun
a reply to: Clasper

I suppose that it would be wrong to say that the average person would have absolutely never, even have a need for such a 200Tb smartphone, but that won't stop them from being put into the marketplace. Honestly, who is going to NEED that much power in a handheld?

(well, to rebut myself, I can imagine such a device could be programed to be an instant two-way translator of every language in the world, putting the transposed words of each language into the proper conversational context for the other. An old sci-fi dream come to life, no one would need to bother to learn another language.)


Who was it that said a pc would never need more than 650K of memory?

posted on Jun, 17 2014 @ 08:36 PM
link
They have had photonics in silicon ready o roll out for about 10 years.
The costs of production of chips have to be fairly distributed so I'm not complaining.
May be worth the wait for a PC upgrade.
Wonder what the "killer App" will be?

Yes this device they call "the machine" is freakin amazing. I can't fathom what I would need with all that power but someone posted this picture that describes how I feel about it. 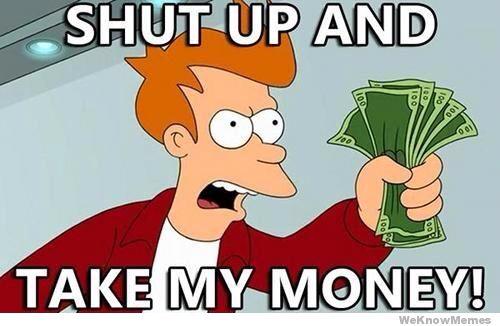 I am not big into games, but I might be when this comes out as I am sure they will be nothing like what they are now.

I would think someone who mines bit coins would be salivating over it.

I imagine at some point in the not so distant future people will have the capability to record every experience of their life from birth to life. It is kinda freaky but still cool.

Cannot wait until the above tech trickles down into the gaming sector.

I am wondering what they are going to come up with to benchmark these things.

Those cubes don't look anything like a computer does in my mind. So basically my liquid cooling hardware will be worthless?

Now they just need to add holographic projector plus an AI to it and some wheels then we will have an R2 unit.

Our fate is sealed.

posted on Jun, 18 2014 @ 12:39 AM
link
For space travel
Teleportation
AI
Robotics
Cybernetics
Autonomous vehicles
Medicin
Heck, even storing "souls" and build a new body
then put it back in....

originally posted by: Cauliflower
Wonder what the "killer App" will be?

*Disclaimer* I make no claims to be an expert in this field, but as someone who took a few semesters of computer science, this is my viewpoint on this. I could be totally wrong in my understanding, wouldn't be the first time!

Thats the beauty of this technology. It uses such little power that your liquid cooling setup wouldn't be needed. After all, the majority of your computer systems heat is generated from all those electrical components heating up under stress. Using photonics should generate next to zero heat, as opposed to using copper traces and electricity like is used now. This isn't talking about just a new computer technology, its talking about completely changing the way computers work. It isn't just things like hard drives/solid state drives and RAM is designed, but also can be applied to processors, GPUs(graphics), etc. Its a completely different architecture (and things are going to have to be redesigned to be able to take advantage of that).
As an example, remember how recently astrophysicists and other researchers recently did a new model of the universe as we know it? That extremely complex and intricate model and simulation took months for a supercomputer to build. With this kind of technology, I can imagine it would take, IDK, minutes maybe even? Imagine being able to do that kind of research, but being able to do it in almost no time, imagine the things you could accomplish, that science could figure out. That is where this type of technology is going, and that is why it is so exciting.

They will then start clustering those for double and quad speeding it, then a new tech...still, its gonna make next gen consoles really impressive...certainly ready for virtual reality augmentation devices growing

originally posted by: staple
Can it run Crysis?

Cannot wait until the above tech trickles down into the gaming sector.


Gaming sector usually makes use of such tech right around the same time as the high end sciences.
Not really a need for this to enhance facebook (or whatever they have in 2020...spacebook I suppose)