This article will make you angry. The US Government is actively seeking those who criticize government, specifically Barack Obama, and arresting them without charging them. They are remanded to mental health institutions where they are given "training" on how to view the world.

Remind you of a little book that George Orwell wrote?

And of course they are going after Veterans!

When I read the headline I immediately thought of this case. Now concerning Brandon, he was sent to a mental facitily because he had some violent FB posts, which he said were music lyrics, if I recall.

What's sad is, the latest mass shooter from Cali, what's his name, posted FB and YouTube videos about his violent thoughts. Well the police were notified by none other than his parents. When the police visited they had a short conversation with him and determined he was no threat.

Meanwhile, Brandon here posts anti-gov't messages along with violent lyrics and is immediately sent to the mental ward.

What's wrong with this picture?

They operate on targeting. Not solving.

Scary article, but not unexpected in view of the political paranoid climate of this administration.

When they finish culling FB, and start culling ATS, the membership here will diminish drastically...

Looking over the criteria for being singled out for institutionalization....they should start with Barry and Holder...

I was friends with someone who personally threatened the president.

Nothing happened to him. I told him he was an idiot.

Unless tou count that two days later he got a few city ordinance yard tickets.

I wonder if this is a hoax. If not, then I wonder how Obama supporters can still like their boy after this.

Either way its perfectly normal for Obama to do illegal things and hurt American citizens.

Possibly we don't have all the details.

sssshhhh... be quiet, your spoiling the agitprop/hysteria!!

originally posted by: jrod
I just shared on FB and talked some smack about Obama. Now what?

If you have any goats, I can house them with mine until you are released with your new *I love my government* programming.

I wouldn't doubt this is happening and legally speaking they can do this. If you are a US citizen then you have no rights. The 14th amendment negates the "Bill of Rights" and creates a different class of people. These people are citizens of the federal gov first and subject to Congress.

There are numerous Supreme Court decisions alluding to this and I will find them later when I'm on a pc. What congress did with this amendment is throw the balance of fed gov power off and in their favor.

Remember the president is a constitutional scholar and he knows these facts. I'm sure I will get flamed for this but go ahead keep up your laziness and ignorance.

So legally speaking you as a US Citizen have not been afforded the "privilege" of free speech and likewise do not have "immunity" from prosecution or worse if you speak contrary what they want.
edit on 16-6-2014 by IncognitoGhostman because: (no reason given)

posted on Jun, 16 2014 @ 12:44 PM
link
I suppose they wouldn't like some of the things I have to say about Obama, and I suppose do not have the same rights as the Republican Congressmen do in disagreeing with some of his actions. So I guess I shouldn't be saying bad things when he does stupid things anymore. I guess you have a right to do stupid things without justifying your actions when you become president.

I am a difficult person to track.....even when I use FB.

I refuse to live in fear and will never cede the right to express the 1st Amendment!

originally posted by: Stormdancer777
I don't understand why they mollycoddle this guy

You made me look up a word again.

Weird, free speech, as long as gov like it.

originally posted by: tadaman
a reply to: nighthawk1954

I wonder if this is a hoax. If not, then I wonder how Obama supporters can still like their boy after this.

Either way its perfectly normal for Obama to do illegal things and hurt American citizens.

Wait a freaking minute. He's only upholding his oath.... 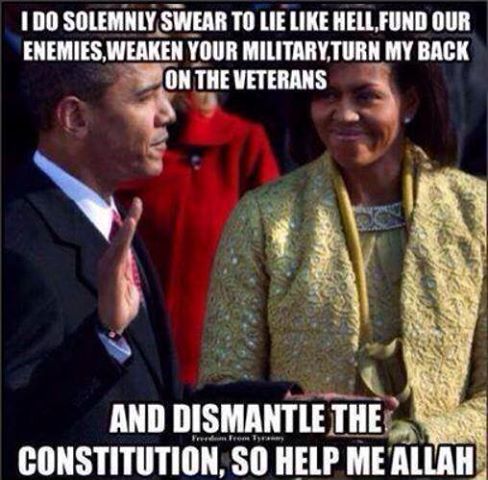 (from Jim Inhofe)
New Mexico Senator Tom Udall and 41 other Democrats have proposed an amendment allowing Congress the power to regulate political speech. They literally want the ability to regulate talk radio, Fox News, and even conservative websites. Even books and movies could be regulated if Congress saw fit.

This goes against everything our Founders intended, and should be a real concern for every American.

We MUST defend ourselves from this unprecedented assault on our God given liberties.

I am joining this fight led by Texas Senator Ted Cruz to protect the rights our country was founded upon.

When Tocqueville wrote about the American Democracy he observed "that, in the modern world, freedom of the press is the principal... element of freedom." The liberties ensured in the Bill of Rights make the U.S. the envy of the rest of the world. Abridging our First Amendment rights is an assault on our freedom of almost Orwellian proportions. Even the late Sen. Ted Kennedy said of this effort, "In the entire history of the Constitution, we have never amended the Bill of Rights, and now is no time to start.”
Jim Inhofe
edit on 16-6-2014 by whitewave because: (no reason given)

Is interesting that here in ATS we scrutinize, criticize and bash Obama, but I have not read anybody so far Posting that they have been arrested for posting their sentiments yet.

I guess the basing that we are talking about may have some hints of activities against Obama personally that may seem dangerous to his safety.

I mean I am no saying that these people are just making complains, but sometimes the complains turn into solicitation of acts of violence.