Ghost Trapped In A Jar. Buy It Now!

According to the listing, this is EXTREMELY RARE, (what isn't when it's on ebay), odd, and supernatural! I know what you're thinking... It's totally legit right?

This is a genuine Ghost caught in a jar. In our most recent ghost hunting expeditions we have encountered many super natural experiences with ghosts. Due to the most recent blood moon the activity of ghost encounters has increased significantly. Ghost hunting has never been better. We have worked hard and used all of our efforts in tracking down and capturing this ghost. Our most recent trip to Washington state has brought us this great success! From our understanding in communicating with the ghost we have come to believe that his name is Kosumi and that he was a salmon fisherman and died in the late 1700's. We believe he is from the Yakima tribe. We were able to capture him on the banks of the Columbia River! This is a rare opportunity to own your very own ghost in a jar. As capturing a ghost is a very difficult task to accomplish. The success we have had here happens only once in a blood moon!

So the ghost has a name AND a profession! I thought selling folks was illegal these days? I wonder why ebay is allowing this listing to stand?

You may be asking yourself... Self... How in the world would I ever know how to properly take care of a ghost if I was the most awesome person on earth lucky enough to put the winning bid on one?

WELL! They've thought about that for you! They have taken the time to give you some excellent written directions on caring for and maintaining your new Ghost In A Jar.

2: Ghosts prefer darker rooms more than one that is well lit. WARNING: take every caution to not expose your Ghost to direct sunlight!

3: Ghosts enjoy the company of humans but make sure to not annoy them. For example ( shaking bottle, tapping on glass, flipping lights on and off repeatedly )

4: Ghost communication is a skill and takes a lot of time but if one wishes to communicate with their ghost they should do so by 1st- addressing the ghost by name 2nd- gently touch the bottle to let them know you are there 3rd- you may now begin to speak with the Ghost. Hearing a response from a Ghost is the tricky part and takes even the most trained ear to hear.

5: If your Ghost in a Bottle begins to shake or move it means your Ghost is upset about past life experience and should be left alone for a time.

6: Ghosts make a great addition to any family and enjoy spending time with their new family so including ghosts on family vacations is recommended. (Be cautious to take care of your Ghost on such adventures)

7: Captured Ghosts on occasion will become lonely for the fact of not being with their own kind, if the chance ever rises to purchase another captured Ghost doing so will greatly improve your Ghost's quality of after life!!

8: Holidays are some of Ghosts favorite times of the year. Including your Ghost in yearly decorating greatly increases your Ghosts feeling of being accepted and a part of your family.

9: Some Ghosts enjoy listening to music but a word of wisdom is not to play music they won't like.

10: Ghosts rely very heavily on energy as positive energy is something he will thrive on while negative energy around him will bring him down. Ghosts have feeling just like you and I do and the energy you surround your Ghost with can make a world of a difference!!

It sounds as easy as taking care of those completely mind blowing sea monkeys, Amirite? Of course I am.

The listing ends with these wise words...

I think that all of us here at ATS should come together, pitch in our pennies, and purchase Kosumi the salmon fisherman to be our new mascot. What/Who else could ever be as worthy as he, of representing ATS around the globe? It's really a no brainer IMO.

There was a prior purchase of another Ghost In A Jar and that transaction received positive feedback!

It's bargain basement prices for sure!

I can't believe someone actually bought one to begin with! 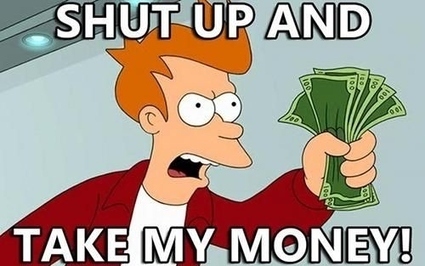 Ha!! Awesome! They can only catch them during a blood moon, so you may have to go on a waiting list. Although, something is telling me that just this once... they may be able to catch as many as you are willing to pay for.

In one bottle sir, or would you like separate bottles?

What will Ebay do when someone advertises a child ghost in a bottle?

I think I would like a Lion ghost in a terrarium so it has some room to move.

WE MUST LEGISLATE TO PROTECT GHOSTS. IT IS WRONG TO KEEP THEM IN BOTTLES!

How 'bout an "extended" visa

What if your ghost is from ancient Rome?

One of the funniest threads I have ever seen on ATS and a mascot? Definitely - do we each get a turn at hosting Mr Ghost and what does he like poked quantumly of course through the glass for breakfast - Salmon sushi?

originally posted by: xuenchen
If you buy one from a foreign country will they need a passport ?

How 'bout an "extended" visa

What if your ghost is from ancient Rome?

It seems nobody is needing a passport lately, so maybe they'll let it slide this time. great Caesar's ghost indeed. Lol

originally posted by: Shiloh7
a reply to: Kangaruex4Ewe

One of the funniest threads I have ever seen on ATS and a mascot? Definitely - do we each get a turn at hosting Mr Ghost and what does he like poked quantumly of course through the glass for breakfast - Salmon sushi?

I was thinking that we would all get turns hosting the ghost. I mean... It's only fair if we all have to pay for him. We share custody like good parents. :p

I don't think I'll poke him. At least not until I am getting ready to send him to his next adoptive parent at any rate.

Yes I agree postage and packing plus sushi (not poked) for a month).

If you buy it, DON'T open it...you'll lose a few brain cells, most of your hair, all your eyelashes and eyebrows...and almost certainly some sort of facial dis figuration. This looks like the 'crab cakes and onion rings' experiment bottles.

Thats awesome - i may even bid.

...storing one in a machine has much deeper poetic meaning...

I can get a better price

posted on Jun, 18 2014 @ 02:53 PM
link
a reply to: Kangaruex4Ewe
That's not a ghost, I know one when I see one, I myself have been a ghost now and then so I know whats its all about, and I will tell you this, its quite easy to escape out of a bottle. However that's not a ghost, what that is but the product of many sleepless nights and much burrito and spicy foods eating, see what you do is this, when you let one rip over the long nights, you quickly do so in the bottle then quark it up real quick, however a jar works much better, something to do with the diameter I was told. Then after a few weeks or months of doing that, the end product is what you see above in that so called ghost in bottle picture. I would not recommend people try that, I only heard of one guy able to do it, and he told me it takes real skill, and you have to be real fast and have deft hands to seal in the freshness.

So ya dude! Whoever bought that has totally been ripped off, that's not a ghost, its farts in a bottle. I could see how somebody would mistake one for the other, it happens quite often actually, and 15$ is really way to much to be paying for it, you probably could get one for 5$. I even seen one once that was going for 2$ on E-bay. The dude was also selling potato chips that looked like various famous figures, and he was making a killing on those sales.