TheDemocrats on Twitter have a "Flag Day" picture but it's not the U.S. Flag !!

In fact it may not even be a flag.

What's the *Real* "Message" with this?

What *IS* it anyway? 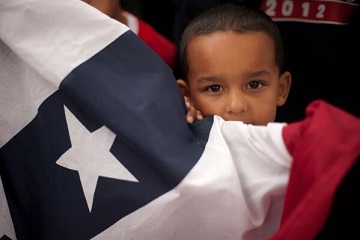 posted on Jun, 14 2014 @ 11:33 PM
link
Granted it's been a while since I've given a damn enough to pay attention to the various flags of the US states & territories, but isn't that the Puerto Rican flag? Which is a US territory, so no outrage needed IMO.

Edit: Professor Google's returns say if it's not a weirdly bunched up Puerto Rican flag, it's probably bunting of some sort. They probably thought they were slapping up a pic of a cute kid with the Texas flag, which is where my mind immediately when before I looked closer at the stripes (Texas is 3 color blocks & a star)
edit on 6/14/2014 by Nyiah because: (no reason given)

posted on Jun, 15 2014 @ 12:59 AM
link
Reminds me of a scene from Jericho.
Maybe Puerto Rico is a officially a state now?
Sounds like a good hub to introduce even more illegals into the US.

Quick! feign outrage and foam at the mouth! How dare Democrats have any kind of national pride! That's only reserved for conservatives.

As we all know dems can't possibly love anything to do with this nation or is territories, FOX News, Rush, and Levin say so.

Therefore it must be a trick.

originally posted by: ketsuko
Look! Someone sneaked out a pic from one of those illegal detention centers ...

If anyone has any money left after the corporate crooks, you'll be asked to give it to individual law breakers.