Pope Francis Warns The Global Economy Is Near Collapse

posted on Jun, 14 2014 @ 09:34 PM
link
I am not really impressed to be honest. These are the type of thoughts I had when I was a little kid. I was in 3rd grade, remember this song. I remember sitting on some steps hearing the 5th grade sing it. It was during the war with iraq part 1, and having a pen pal in the marines fighting it.

I remember back then wondering why the hell the world is not like this. Wondering why god was such a coward, and not stepping in. That was also back when I was an indoctrinated born again christian. Back when I had some hope.

This is the 3rd major warning/hint in the last 6-9 months that the long predicted economic utter collapse is on the near horizon.

One of the other ones was Russia shedding tons of USA $paper$.

I forget what the other one was. What was it?

Folks ought to pay attention.

WHEN it comes, it will be far worse than the Great Depression of the 30's . . . BY DESIGN.

Hope is a priceless thing.

Of course, hanging it on a fantasy sky-hook is futile.

Nothing wrong with the Truth, keep-up such good work and Thank you.

posted on Jun, 14 2014 @ 10:13 PM
link
I begrudgingly agree with him... again. The world economy cannot continue as it does. He's def not the first to bring it up though. What worries me the most is that the vatican has started making sensible statements. Thousands of years of unjustified claims, and then with one pope, they just all of a sudden start making sense?

Thats the real story here. Next thing you know, he'll come out as an atheist.

It is a good thing, I suppose, since it both reinforces the present predicament that the lamestream media hasn't been talking about for the last 10 years anyway, plus it just shows how corrupt the entire system actually is, since any of the past popes or any politician could have said the very same thing, but didn't.

I think they're rather cute looking... fluffy pants and all:

originally posted by: steaming
a reply to: bobs_uruncle

Like doctors, the PTB bury their mistakes ;-) I will take a look at that book. As an aside, I don't remember the date Pope John Paul II showed up in Montreal Canada for his 12 day tour, but here's a picture. Now what is wrong with this picture, it's an actual photograph of the newspaper that day and is on the wall in my uncle's basement, because he found it that weird. 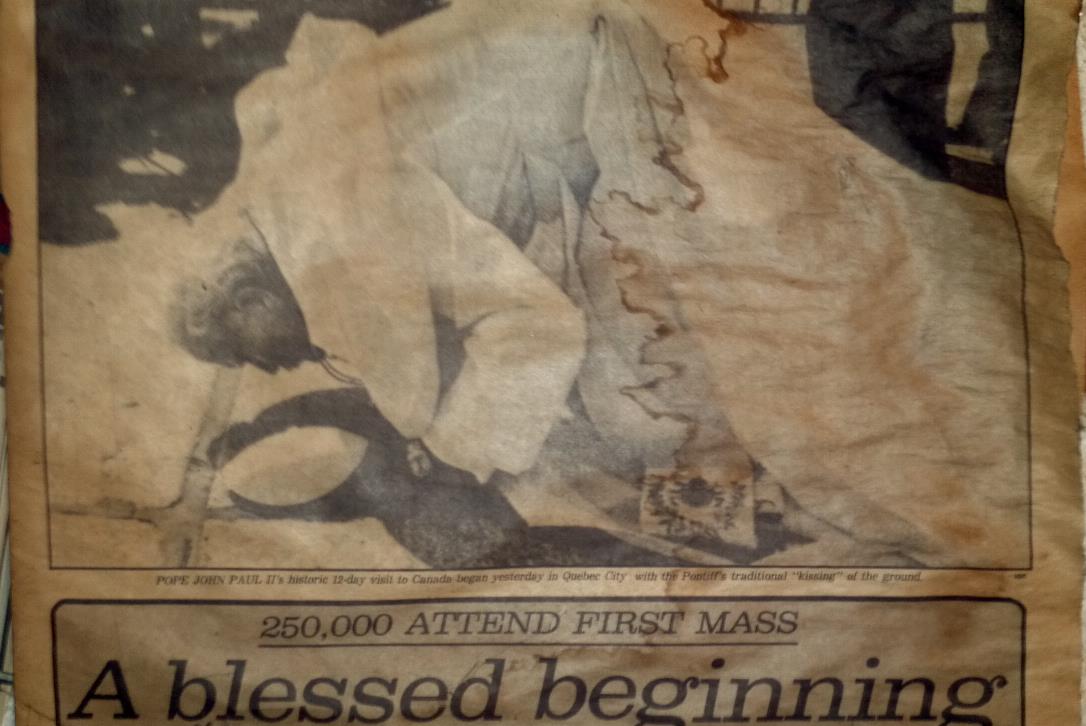 Here is another copy of the pic on the web on a different site;

Pope Kissing Ground and that website is National Snapshot.

So he is basically describing the Roman Empire of 2000 years ago....of which he is now part...The Roman Catholic Church....founded by Romans, for Romans.....and others to pay taxes...err Homage too.

Yes he has a full grip on it.

Im sure they could find and fund an army somehow.

A little issue to be dealt with in Iraq atm......send Robin Hood and Friar Tuck...they can sort it out.

posted on Jun, 14 2014 @ 11:57 PM
link
Well, the Pope is right. I can't say much more than that. I never expected this economy to last this long, I avoided even investigating it for years. No use getting involved and worried about something you personally can do nothing about. Just making sure your home is free and clear and you have a little money in the bank to cover six months is all you should worry about. Having food to last a couple of months is advisable also and not being dependent on too many meds is necessary. The more reliant we are on the system, the greater the possible crash could be. That is because we allow it to escalate to unrealistic levels instead of fixing the problem. Throwing more money at something that doesn't work will not help.


Hypocrisy much? I find these statements to be calling the kettle black.
edit on 15-6-2014 by mtnshredder because: (no reason given)

btw, i'm usually one of the herd decrying the decadent complacency and probable corruption of the Vatican and i'm no biblical evangelists, but this is what it is until we know otherwise; an actual Pope who's speaking up against the corporate war machine.

originally posted by: McGinty
a reply to: soulshn

I suppose this may be true if you're into labels and putting ordinary people on a throne above you. If you know anything about the Catholic church you would know they're far away from any moral resemblance of Jesus and his teachings. Yes exciting if you say so.

I have a problem with the royal "We".

So what if this man speaks the speak etc its still the samed old Catholic guilt trip and nothing else! We are labelled by the religiosity, another exctly the same was that ghastly Northern Irish dog collared Ian Paisley whom hysterically screamed at his congregation "Yer all Sinners".

Most of us already know and think exactly what he is saying, so he's hardly original. One just hopes that with his clout he might try to do something about it, but will he also act against the Vatican's own bank?

originally posted by: Deny Arrogance
I read the article and did not see any quote from the pope using the word collapse.

There is no collapse coming, it's only one system being replaced by another system, the only problem is that we don't see the new system that is already developing somewhere in the world. As I understand it's not a capitalist or a communist system, but somthing completely new, and therefore very difficult see.

Beware of the false prophets (predictors)

posted on Jun, 15 2014 @ 06:00 AM
link
The Pope is correct, a whole generation (my generation) has been discarded over most of the world, as the Baby Boomers and those directly under them stand on money -

But having a lot of money is worthless without consumers to produce demand for whatever it is you are selling. See... this is where things will crash.

Also, look at Detroit and you can see how assets that aren't able to be sold or used depreciate in value quickly. Therefore, the wealth "held" by the older generations may not transfer well (or at all) to either my generation or the one below me -

So what if a few rich people collect the pieces, they will be far outnumbered by the poor and probably just as worried about survival as anyone else.

Remember - the economic recession in 2008 caused by corrupt bankers and corporate goons created a gigantic rift in society, displacing a lot of people my age from work for years (and many are statistically shown to have not returned), it is a documented phenomenon in the U.S. at least -

posted on Jun, 15 2014 @ 08:17 AM
link
OK, so what is the moral to this story? Is there an economic reset the top fat cats could do to keep everything in play and the world productive? Are there perhaps better and more constructive projects humanity can be working on to accomplish rather than waging war on each other as impetus to advance our science and technology? It seems to me there is enough goodies to go around and everybody could be fed. Heck, rather than stressing everyone and oppressing them to give them incentive to work and produce we probably could build machines to give even the laziest ones among us an easy go and still have enough people that like to be working and productive to keep the gears greased and turning.

Yeah, we've been working with a system based on some pretty lame ideals for a long time - war economy, debt-based monetary systems, etc. I bet we come up with some better goals and directions and then re-start the system where it would be more equitable all around and everyone can get fairly much what they want out of life. It might even have enough positives to give the uninspired a little more incentive to contribute their efforts cheerfully. We could do it, I'm sure.

posted on Jun, 15 2014 @ 08:48 AM
link
I was under the impression that the Vatican was largely responsible for the toppling of certain governments and the funding of certain wars. Arnt they one of the biggest land owners via the churches and money they get donated and have invested which is all TAX FREE!!!!!!!!!

Yeah the church talking about the world financial crisis is like an Obese 300kilo man talking about people eating too much food....Sure.