Tomb of 'Dracula' Discovered in Naples 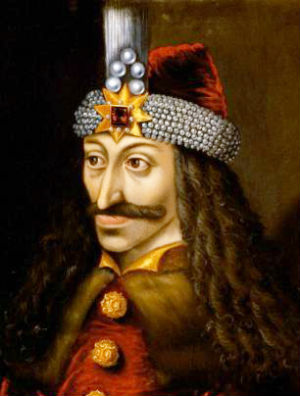 The alleged tomb of the infamous 16th century tryant Vlad the Impaler has been uncovered in Italy.

The main inspiration for Bram Stoker's iconic vampire Dracula, Count Vlad Tepes was one of the most feared men in 16th century Romania.

Thought to have died on the battlefield in 1476, Tepes' final resting place has remained something of a mystery, but now researchers believe that the infamous impaler may have actually survived the battle and had instead ended up being captured by the Turks.

His daughter Maria was believed to have paid a ransom to have him released and taken to Italy.

In support of this version of events a curious headstone was recently discovered in Naples' Piazza Santa Maria La Nova, the same graveyard in which his daughter and son-in-law are buried. The stone was found to be adorned with images and symbols more indicative of Translylvanian origins than of an Italian nobleman.

"When you look at the bas-relief sculptures the symbolism is obvious," said historian Raffaello Glinni. "The dragon means Dracula and the two opposing sphinxes represent the city of Thebes also called Tepes. In these symbols, Dracula Tepes, the very name of the count is written."

Researchers are now seeking permission to investigate the grave further.

He has cast a shadow over the craggy Transylvanian Alps for centuries.
But the remains of the real-life Dracula are today to be found not in the Romanian Alps but in Italy, according to new research.
Count Vlad Tepes, the so-called Dracula, was thought to have died in battle. But scholars from the University of Tallinn say they have discovered documentary evidence that he was in fact taken prisoner, ransomed to his daughter - by then safe in Italy - and buried in a church in Naples

There was a time in my 20s when I did a lot of digging into his life, and tried to figure out where he might have been buried. I was so jealous when my brother went on a trip to see the famous castle in Transylvania and I couldn't go with him due to work.

What a brutal leader he was, some say he was a madman, people feared him and the stories they heard the blood thirsty count do.
Sitting at a dinner table outside, whilst people in front of him were impaled and dying ....

So now we know that he was most probably put to rest in Italy.
I would have thought Turkey more likely but oh, well.
Another interesting piece to the puzzle.
I also read that his head was served on a platter to the Ottoman Sultan as a gift.

I wonder how his daughter got the head then back?
I don't think this puzzle is completely solved yet, nevertheless interesting news.

posted on Jun, 14 2014 @ 12:27 PM
link
On the other hand... he actually defended Romania from the Turks (whom were worse than him) and is probably due to Vlad that there's even a country called Romania these days so... its a double-edged sword. Plus he was a crusader...

posted on Jun, 14 2014 @ 12:38 PM
link
Great thread.Fascinating theory.I know there was a rumored resting place for him in Romania that was found to not contain a body.Maybe because its in Italy?

posted on Jun, 14 2014 @ 12:45 PM
link
Thanks
Yes, I read about that too, which is why I'm curious how this is going to unfold. I remember reading about the tomb in Romania being empty.
I'm not very superstitious or anything, but, brave be the man, who opens that tomb for DNA testing.

posted on Jun, 14 2014 @ 01:20 PM
link
Oh, fascinating find! I hope further information becomes available once the tomb is opened. I am a bit confused, though. If Vlad lived and perhaps died in the 1400's, would that not be the 15th century as opposed to the 16th century as expressed in the source article?

Yes, they got that wrong.
Also,I read somewhere else that he died 1477, not 76.
I guess his death date is somewhat hazy....lost in history.

originally posted by: LightningStrikesHere
Someone better put a steak through his heart PRONTO!!!


Don't waste a good steak use a stake!

originally posted by: eyeinoz
misleading title, Vlad is not Dracula

Then enlighten us who is Dracula?

The title says 'Dracula' not Dracula.
I didn't make up the title, it's how I found it from one of the sources I was researching.

His real name was:

I don't speak Romanian, only know a few words, but I do know that dracul means dragon/ devil. It had something to do with his family name. So no, if you studied his life, then the title isn't misleading at all.

I don't know about you ladies and gentlemen but once the dna testing is done, and it is confirmed, this will be huge news!
Just imagine, we will finally know where Vlad Tepes was buried.
I have been wondering about this for around 20 years.
What a great discovery... I wish more history buffs on ATS could share their thoughts.


originally posted by: LightningStrikesHere
Someone better put a steak through his heart PRONTO!!!


Don't waste a good steak use a stake!


And behold!! The chosen one! Lol I was waiting for someone to notice that! .. It auto corrected and I decided to just leave it lol..

The title says 'Dracula' not Dracula.
I didn't make up the title, it's how I found it from one of the sources I was researching.

His real name was:

I don't speak Romanian, only know a few words, but I do know that dracul means dragon/ devil. It had something to do with his family name. So no, if you studied his life, then the title isn't misleading at all.

Actually "Vlad "Dracul" " or "The Dragon" was is father, Vlad II - he was Vlad III Draculea (son of the Dragon) - this has to with his father Vlad II being inducted into the order of the dragon and therefore form the House of Draculesti (or something really close to this)

So thats maybe why our friend there says Vlad III is not Dracula - because his father's surname was Dracul. But yes who we call Dracula is actually Vlad III Dracula (or Draculea) - or after his death by his sweetheart name Vlad The Impaler.

Are we splitting hairs here?
The name means dragon, and draculea , means little dragon little devil.After his father, though I think the impaler actually fit the name dracul better than his father.

Are we splitting hairs here?
The name means dragon, and draculea , means little dragon little devil.After his father, though I think the impaler actually fit the name dracul better than his father.


Not splitting hairs... that was because our friend up there said that Dracula wasnt the Vlad we were talking about. I just wanted to clarify things because people sometimes get Vlad II and III wrong.

Now... Rainbow, its not "devil", its dragon. Its an Order. His father was inducted into the order of the dragon by a holy roman emperor (I cant remember his name) its not devil, its not subject to interpretation, its not a "surname" nor a "nickname"... its Dragon, really it was a real chivalric order for nobility in the 1400s, modeled after the orders of the crusades to defend Christianity against its enemies, in its particular case, the turks (or the ottomans as you prefer) - you think anyone would like to be called the "devil" or "little devil" when belonging to a christian chivalric order swore to protect the holy cross and defend Christianity? lol Like ... (the Lionheart ...of sorts - not a good comparison I know but I think you got my terrible attempt at an analogy lol)

On the other hand "The Impaler" was something he got only after his death I think... Vlad Tepes (means Vlad the Impaler) if he wasnt such a nice guy, he would be known as a Dragon... but unfortunately he had this thing with big pointy sticks and people hanging up top from them...

Theres even a story where a guy (I cant remember the relationship with him) told the Duke (he wasnt a count, he was a duke) that the smell of the rotting impaled corpses was awful - and then he had him impaled higher than the others "so the smell of the rotten corpses would affect his sensitive nose" - well... we all have our... bad days I guess. lol

Theres a few more I know from the top of my head...


EDIT: but the reply wasnt actually directed at you, but to the other member who said that this Vlad wasnt actually "THE" Dracula... who in fact, is. Vlad II is Dracul. Like I said, just wanted to make it clear for him, sorry if it seemed to be directed to you
edit on 15-6-2014 by FraternitasSaturni because: (no reason given)

posted on Jun, 15 2014 @ 10:19 AM
link
It would be an interesting find, but i would have thought it relatively easy to determine whose tomb that was from it's context, given the heraldry and such forth. 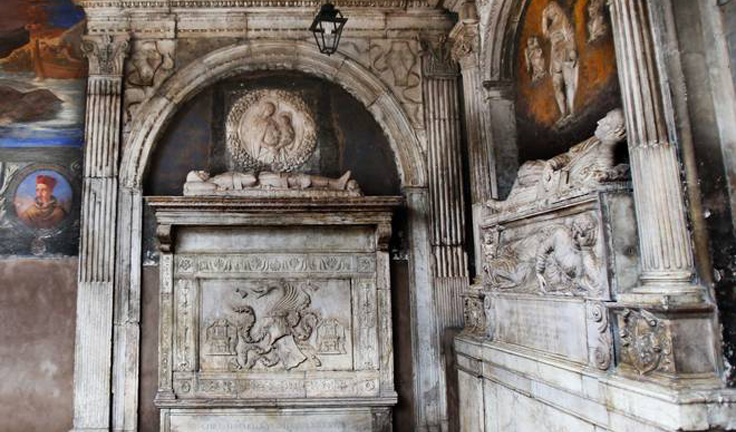 The iconography of the tomb is certainly fitting for a Dragon Prince of that Catholic Order. 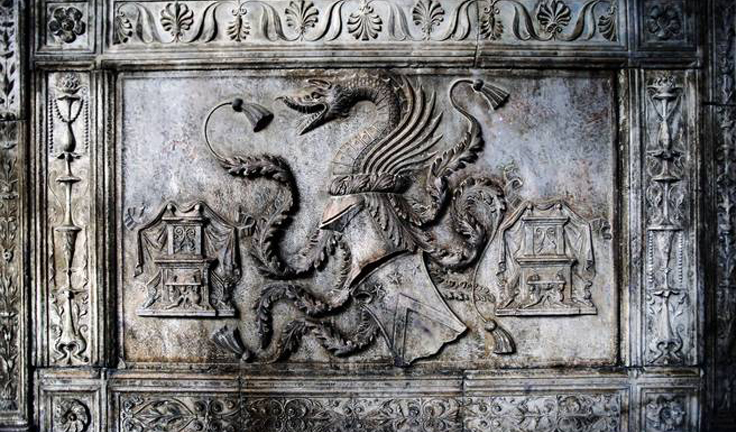 The link between Count Vlad Tepes Dracula and the city of Naples and its King is easy to reconstruct. Indeed, he belonged to the Order of the Dragon, a mutual aid association established to counter the expansion of the Turks, as did Ferrante of Aragon, King of Naples, and other European dignitaries. So it is not surprising that in 1476, at the tender age of seven, and following the death of her father Vlad after a battle against the Turks, Maria found refuge in the Kingdom of Naples 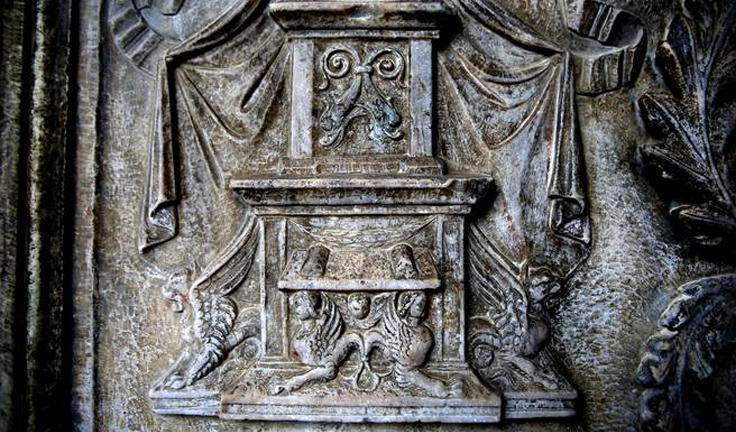 When Maria arrived in Naples, news soon spread with regard to a young princess of unknown Slavic origins, and heiress to an important throne. But Maria never revealed her relationship to Dracula. However, the researcher Giandomenico Glinni maintains that the girl concealed her origins in the surname she chose to use in Italy: Maria Balsa. What may seem like a simple derivation from the word “Balkan”, for Glinni it is symbolic of the never-forgotten bond between Maria and her father: “The name for a dragon in old Romanian is “bal” or “Balaur”, a term still used today in local folklore, while the suffix ‘sa’ would be like the present-day “son” in the English language. So Bal-sa would then mean: “Daughter of the Dragon“.


Connecting Tepes to Egyptian Thebes seems something of a stretch, as it's generally understood that the word "tepes" in Romanian means "impaler", from teapa a spike or stake, but it's a good story...

Those are some beautiful pictures. Thank you for the information and the link, it's much appreciated.