WND previously reported Friday that private contractors who have recently returned to the U.S. from Iraq said their former colleagues effectively had been abandoned by the U.S. military and were fighting for their lives against an army of jihadists surrounding the base who belong to the Islamic State in Iraq and Syria, or ISIS.

Well we know how concerned Obama is about saving American lives. So much so that he released some of his Taliban buddies in exchange for an army deserter. However when it comes to ordinary American citizens fulfilling their contracts in Iraq, forget it. They just need to die. Obama actually denied them air cover and it was left to the Iraqi air force to help.

I don't know how much more of this president we can stand, before our country is gone. I can hardly believe my eyes. I suppose there was a reason Obama was kissing and abasing himself before his Sunni overlords in Saudi Arabia. Moreover he has helped fund and arm ISIS, so I guess this is part of the plan. 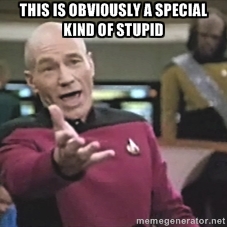 Even Captain Picard can see this isn't logical.

I know we're having budget cuts and all...but this goes just one little step beyond humiliating in my thinking.

I fully expect with the way things are going. Instead of tax refunds next year, we'll all be getting a prayer rug instead.

The only domestic terrorist I know in the White House...is our president...

originally posted by: madmac5150
The real question here... Is he that obtuse, or is he just an idiot?

He needs to get that Magic 8-Ball out of the oval office permanently... it's broken. The Ouija Board as well...

I honestly can only assume that this is a full blown conspiracy. Obama and his overlords want ISIS to destroy Iraq. After all ISIS is opposed to Iran and is probably more likely than anyone else to invade the republic. If this is the case, watch Obama and friends continue to wring their hands while secretly enjoying the carnage.

Have these guys figured out from their magic 8 ball what happens when ISIS gets their hands on Iranian nukes? Or is that part of the plan as well?

posted on Jun, 13 2014 @ 05:57 PM
link
I stood up for the Berghdahl guy as i wanted to see him get a fair go not a trial by media so to speak and i stand by that. But this,this is just, what can i say, #.
Some of the things I have been reading that ISIS have been doing on their march towards Baghdad is brutal, and now O wont even give air cover to get his own countrymen out, maybe the big plan is to wait long enough till the place is a terrorist state then Nuke it

u dont need 8 balls or Ouija Board's cause u have,,


From the Halls of Montezuma
To the shores of Tripoli;
We fight our country's battles
In the air, on land, and sea;
First to fight for right and freedom
And to keep our honor clean;
We are proud to claim the title
Of United States Marine.

thats a reality that the wHITE hOUSE,,does not seem to understand,, when it comes to showing,,for right and freedom,,because they dont understand it.

Even Captain Picard can see this isn't logical.

I know we're having budget cuts and all...but this goes just one little step beyond humiliating in my thinking.


I almost wonder about his mental stability. There have been persistant rumors that the Prez has a coke habit. His irrationality could easily stem from this, if it is true... maybe he just needs a stint in a rehab facility. They have a good one in Kansas...

Let's say that you are a good democrat, maybe even an Obama supporter. Just how do you think this is going to play out in the next elections? There will be someone who will make political hay of this. After the Bergdahl incident this is just political suicide.

Could it be that Obama doesn't think he needs to worry about elections any more?

The ISIS is doing what they have to, to achieve their goals... It's more frightening to see so many around focus on the brutality and not the cold, methodical purpose behind it. Folks ask why the towns fall and large populations buckle. That's why, and it's terribly effective.

There are a dozen tin pot goobers over there like this guy was...until he kicked it in the butt and got his little army on the road. Now he's top dog at any cost, and doing anything it takes. Against soft leaders we left behind so as not to be challenged ourselves? Well.... What say? Monday for Baghdad to fall?

So actually any territory they have thus far siezed,,is now legally recognised, at the U.N,, by what Government?

Or is land siezure by force, now acceptable,, at the U.N??

Yeah notice they won't dare touch the Kurdish Peshmerga. In fact I heard ISIS was going to release some of their people that they captured. The Kurds are also good Sunni's. This just really stinks to me. For now I claim the Obama and McCain handwringing is all show.

The contractors are just collateral damage in the way of the 'wonderful' goal of reestablishing the petro-dollar in Iran. Just one man's opinion.

I don't know how much more of this president we can stand, before our country is gone - See more at: www.abovetopsecret.com...

IF he does nothing ?

That is a fact.

posted on Jun, 13 2014 @ 06:11 PM
link
whom are these 'private contractors' getting paid by... if it's a private corp. like Blackwater then the Contractors are not being 'left behind' by the Oval Office jihadist sympathizer


as much as I despise Barry I have to side with his stance on this issue...
but mind-you ALL the diplomats & family's & support personnel are out first, there is no Benghazi 'blind eyes' to be re-enacted now as 4 were left-to-die to protect a (pretty well recognized) administration (secret) operation in Libya on 911
edit on th30140270119913132014 by St Udio because: (no reason given)

originally posted by: Sublimecraft
"No-one left behind", apparently the government didn't get the memo.

Bush owns going in to Iraq.

I have a gut feeling that the "deserter" was really an intelligence asset. Evidence points to Obama being CIA before he was even in Congress.

That doesn't mean I'm saying it's good or bad - just that what people think happened is probably not what actually happened, as is usually the case with government.

Is Obama "obtuse, or is he just an idiot"? Neither, I'd say. He plays his part, and if you think he's an idiot, you haven't been paying attention to what's really going on imo, or to who actually operates this nation and what their motives are.

As to the contractors being left in the path of an insurgency.. Well, what we are seeing is one smaller puzzle piece of a much larger game. If they are being left there, they are being left there on purpose to further some larger agenda that we have yet to determine, be it psy-ops, empowerment of radical islamists, something to do with banking and oil, control of ancient alien relics, or just greedy elimination of competitors. What I'm saying is that our information on these kinds of events is limited, and we are missing the big game, whatever it is, because we can't stand far enough away from the board to see it.
edit on 13-6-2014 by pirhanna because: (no reason given)

Not that I know of... Iraq is still Iraq. They have to take the Capital like the rules say, to sound almost corny about it...

I suppose they COULD take everything in a 360 degree circle and lay siege to the city like times of old ....but then modern Air Forces can introduce that old tactic to what has improved in the hundred years or so since it's been a very good one. That would be suicidal...

They say they are marching on Baghdad and so far, they seem to do what they threaten right down the line... The Baghdad Government and people protecting it in the physical sense don't...inspire confidence. I think if the city's people are convinced to think likewise, they'll get their Capital, since this one is playing old thinking with old school directness.

Those in Iraq are private contractors. Why should "Obama" rescue them? They knew what they could be facing in an unstable country. Their company should be getting them out.

I feel for the Kurds. I really do... Not to say they haven't pulled their own share of real nasty crap too. They certainly have. However, they've gotta be one of the most dumped on groups in this whole area to consider. I think they'll make peace to coexist alongside whomever comes to be there, and agrees to stay on the OTHER side of a border the Kurds respect.

I can't blame them, given history. They are more or less on their own side in the end, I believe.