A reservoir of water three times the volume of all the oceans has been discovered deep beneath the Earth's surface. The finding could help explain where Earth's seas came from.

The water is hidden inside a blue rock called ringwoodite that lies 700 kilometres underground in the mantle, the layer of hot rock between Earth's surface and its core.

The huge size of the reservoir throws new light on the origin of Earth's water. Some geologists think water arrived in comets as they struck the planet, but the new discovery supports an alternative idea that the oceans gradually oozed out of the interior of the early Earth.

"It's good evidence the Earth's water came from within," says Steven Jacobsen of Northwestern University in Evanston, Illinois. The hidden water could also act as a buffer for the oceans on the surface, explaining why they have stayed the same size for millions of years.

Three times the volume of all oceans , i heard this theory before about the water on earth, the water on earth dint had to evaporate when the planet was a molten rock because the rock itself acts as a sponge, so the water was always here and dint came from comets.

Obviously its not an ocean its like oil, trapped in a sponge of rock so don't start to theorize about hidden civilization in the earth underground oceans...

Oh and this is just in north America, who knows what is elsewhere 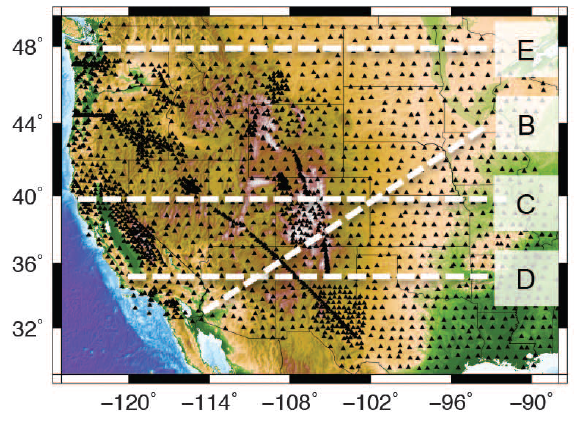 What they did is study the propagation velocity of around 400 earthquakes in each of the triangles in the image above, when the wave hits the water the velocity decrease, this is how they map the water around 700km below the surface
edit on 13-6-2014 by Indigent because: (no reason given)


with the data, applying different existent models they came to this 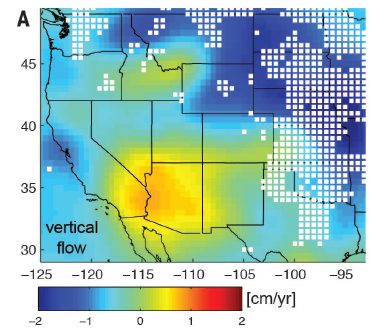 Its not like we have ever seen a water volcano.

Its not water, its molten rock rich in water, at a right temperature the water can separate from the rock according to the paper, but frankly i don't like to read papers if you get what they say from the abstract

The high water storage capacity of minerals in Earth’s mantle transition zone (410- to 660-kilometer depth) implies the possibility of a deep H2O reservoir, which could cause dehydration melting of vertically flowing mantle. We examined the effects of downwelling from the transition zone into the lower mantle with high-pressure laboratory experiments, numerical modeling, and seismic P-to-S conversions recorded by a dense seismic array in North America. In experiments, the transition of hydrous ringwoodite to perovskite and (Mg,Fe)O produces intergranular melt. Detections of abrupt decreases in seismic velocity where downwelling mantle is inferred are consistent with partial melt below 660 kilometers.These results suggest hydration of a large region of the transition zone and that dehydration melting may act to trap H2O in the transition zone.

Spoil-sport! I only watched Journey to the Centre of the Earth the other day and thoroughly enjoyed it - you have dashed my adventourous side.

On another note altogether I do hope my government doesn't think of fracking down to that depth as they are in the process of passing laws that stop landowners say no to fracking on their own land. - I do wonder if queenie will get cross if her land comes up for fracking on.

Nice that science finally catches up with the Biblical description of reality in terms of water deep in the earth.

posted on Jun, 13 2014 @ 05:39 AM
link
At first glance i thought this was about the inner earth theory,that says earth is hollow and has complete life in it with other races.Well at least this stirred something inside me.

The Moon "rings like a bell" too explained in a recent ATS thread when the lunar landing craft land.

In the source, the earth rings like a bell after EQ's.

originally posted by: Granite
a reply to: Indigent

The Moon "rings like a bell" too explained in a recent ATS thread when the lunar landing craft land.

In the source, the earth rings like a bell after EQ's.

Any large event making big vibrations "echos" around inside the earth, depending on your detection ability it can echo many times each time the initial front of the wave hits the surface it "rings" like a strike of a bell.

....The water is hidden inside a blue rock called ringwoodite that lies 700 kilometres underground ...

and those 'readings' which suggest, perhaps the presence of H2O, is in actuality a misinterpretation of the data...
abundant water some 420 miles below the surface and suspended in the hot, plastic, molten (lava like) rock


now for the biblical angles on this news...
strange that the biblical Genesis stories talk about the 'waters-of-the-deep'...you think the Great Flood was the upwelling of some of these underground oceans' ?

next: eerie how in the coming Tribulation that the rivers/streams & possibly all fresh water bodies of water were turned into wormwood
and this hypothesized H2O located deep underground is locked in a porous material named ringwoodite...
Is it coincidence or synchronicity the reference of ~" WOOD " is found in both the creation waters and the end-of-age waters of the Tribulation ~

posted on Jun, 13 2014 @ 06:51 AM
link
Better not let anyone get ahold of that "blue rock" they'll be trying to make jewelry out of it, and will pelleted the earth of it...just enough to collapse the earth......kidding....on a serious note, ....can fracking injure or harm this in anyway? ...and does the mean that the water tables rising is actually the center of the earth oozing out,,and not the polar ice caps?

posted on Jun, 13 2014 @ 07:05 AM
link
Nice find OP it makes sense that fluid can be saturated if not absorbed within certain mineral formations (un aware to man on top surface) reminds me of the Giant crystal caverns and how they were filled before punctured by miners in the region wouldn't doubt there are more caverns like this and other fluid pockets.

This water containing fluid may have potentials that allow the water or other fluid like water to be extracted from it or from the mineral compounds trapping it.
Further deeper within EA*RTH the processes going on may enrich certain bio/mineral agents within the fluid that may be helpful or harmful for encountering inhabitants of it. These agents may alter or change make up of those who encounter it who are not native to it.
If it is useful, it would make sense that existing interest would not want roof inhabitant interest interfering with extracting it. E ABZU comes to mind but 1 is an outta box thinker...

Thanks for this interesting confirmation OP.

posted on Jun, 13 2014 @ 07:53 AM
link
This is the water Noah recorded as coming from the bowels of the earth,this water comes to the surface during the Cataclysm that heralds the end of a 3600 year long Earth Cycle.This water is why it took 40 days and nights for the Ark to become grounded atop a high mountain plateau.That underground resevoir had to go back where it came from,the oceans immediatly return to their basins but this huge volume must seep back in over a longer timeframe.

originally posted by: BO XIAN
a reply to: Indigent

Nice that science finally catches up with the Biblical description of reality in terms of water deep in the earth.

Now if science could just confirm the earth is flat and find that damn tree you can supposedly see all the lands from then your religion may get some credibility.
edit on 13-6-2014 by Grimpachi because: (no reason given)

We need someone to relate this to aliens too please

I don't have an alien connection, but I do think this aids my thoughts that the Earth has a ignited hydrogen core that is fed from mass amounts of H20 which is activated by our magnetic field (not a result from a iron core but from perhaps Metallic hydrogen) that creates a magnetic gas centrifuge. The Still just a untested hypothesis, I admit, but now a little more scientifically viable.

The possibility of a hollow Earth and internal light because of a rotational and magnetic gas centrifuge
edit on 13-6-2014 by TheLieWeLive because: (no reason given)

posted on Jun, 13 2014 @ 08:23 AM
link
Seems strange that so many people can embrace the Atlantis flood myth, but so many more get down right nasty about the Biblical flood myth.

With so many cultures having epic flood myths, I don't see why anyone should single out one cultural myth to beat on like a dead horse.

I can't wait till America creates a new weapon that can release that water from underground instantly. No need to worry about nukes, just flood the middle east and russia for 40 days and 40 nights. Weapon of Biblical Proportions(WBP) I just coined that, don't go stealing it