Biden to Germans: You are xenophobic

posted on Jun, 12 2014 @ 01:39 PM
link
Vice President Joe Biden undoubtedly ruffled some feathers in Germany on Tuesday when he suggested the country was “xenophobic” and much less accommodating to immigrants compared to the United States

Just one question. When last did the mighty biden last check out his own country? You know the USA might still need Germany not too far in the future when the US need votes from the EU and China and Russia ain't playing ball already, now they pee off the next biggest. Difficult to survive without friends. They are hard to make and even harder to impossible to get back.

Who's Joe Biden? Doesn't he own a chain of car dealerships?

Oh geeze...how did he get out of the locked closet in the basement of the WH?

I think Germany has taken it's cue from the mess of immigrants flooding the UK, and France.

Biden...friend to all immigrants...as long as he doesn't have to pay for them...

Biden is the class clown of the WH...time to lock him back in the closet. I heard a rumor, he's hoping Hillary will pick him as a running mate...LMAO!

Biden to Germans: You are xenophobic

Germans to Biden: We have the right to be. Is our country and we can do whatever we want. We are not Iraq, Iran, Libya, Siria, Egypt or any other country that US can toy around. Biden straight your body up when you speak to germans!!!

Every country is "less accommodating" than the US when it comes to immigration.
With the numbers of people sneaking into the states across the southern border, maybe the US could afford to be a little less accommodating as well...

posted on Jun, 12 2014 @ 02:28 PM
link
Trust me Germany...Please? Biden doesn't represent us all. Increasingly, he doesn't represent much of anyone, really. He just says stuff because it pops out of his mouth before someone can send him off for another fact finding trip. Maybe next time they'll send him to explore the South Pole in winter. We can hope. Until then? 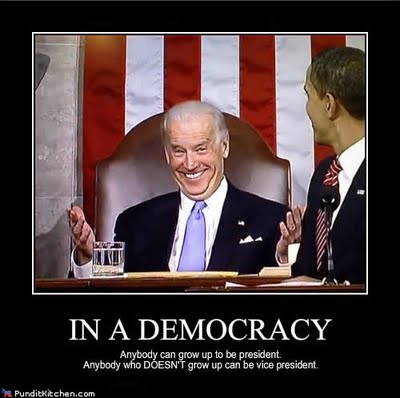 originally posted by: neversaynever
Vice President Joe Biden undoubtedly ruffled some feathers in Germany on Tuesday when he suggested the country was “xenophobic” and much less accommodating to immigrants compared to the United States

Poor stupid Germans ... so scared of the Russians, they turned themselves in to the Americans. And what did they get in return? The US hasn't kept one promise, not a single one ...

Well, this is what you get for being stupid ... you lose everything, even your country and the future of your Children.

Germany is dead ... and the Germans will be soon, as well ... that is, the "true" Germans. The few that are left, anyway ... who ever lives in Germany and speaks German isn't relevant.

Please don't think that most American people even come close to thinking like this DOLT.

He and his master like to think most do what with there world collapsing around them while they play SWITCH with Pelosi and Reid...oh yah Jarrett gets in on the game to when she is not posting the orders of the day to Obama.

posted on Jun, 12 2014 @ 03:27 PM
link
So the Germans are conservative, that's good. They might actually survive the Economic crash and be less apt to be poisoned by our toxic untested food chemistry. No long term testing is required for most things here in the USA. We are a country that promotes risk...it will be our downfall.

Why allow immigration then get your country overpopulated and have possible terrorists weasel their way in. It is their country, let them do things the way they want to.
edit on 12-6-2014 by rickymouse because: (no reason given)

originally posted by: neversaynever
Vice President Joe Biden undoubtedly ruffled some feathers in Germany on Tuesday when he suggested the country was “xenophobic” ...

I thought the word xenophobic meant fear of Aliens-- like literally, e.t.'s

Maybe Biden was actually saying something altogether different than how
it's being interpreted.


BIDEN: I am very optimistic about Iraq. I think it’s gonna be one of the great achievements of this administration. You’re gonna see 90,000 troops come marching home by the end of the summer. You’re gonna see a stable Iraq that is actually moving toward a representative government…I’ve been impressed by how they’ve been deciding to use the political process rather than guns to settle their differences.”

Germans don't see themselves as an immigration country .

originally posted by: Deny Arrogance
You can always count on Biden for expert analysis of foreign affairs.


BIDEN: I am very optimistic about Iraq. I think it’s gonna be one of the great achievements of this administration. You’re gonna see 90,000 troops come marching home by the end of the summer. You’re gonna see a stable Iraq that is actually moving toward a representative government…I’ve been impressed by how they’ve been deciding to use the political process rather than guns to settle their differences.”

Deny Arrogance...did you wipe that off before you posted it? You know where he pulled that out of...

He's the great humanitarian deluxe too. Don't forget that...

When the Obama campaign released past tax returns for Biden in 2008, it was revealed that the Bidens donated just $3,690 to charity over 10 years — an average of $369 a year

He's just the cat's pajamas...dontcha think....Dang I wish he was our president....

posted on Jun, 12 2014 @ 06:24 PM
link
Joe Biden is Obama's insurance against assassination. Notice there are two asses in assassination? Just like the White House.

Who's Joe Biden? Doesn't he own a chain of car dealerships?

Joe Biden is the reason we should think twice before filing articles of impeachment against Obama.

I believe a "Git 'er Done!" is in order for this one. (where's the barf emoticon?)

I really appreciate your post, and you were already one of my fav ATS posters.

And no worries, I know Biden is a clown.
I must say though, you seem to have quite a few clowns running and representing your country right now.

But who are we to judge... our current politicians are not the cream of the crop either.

a reply to: Telos

Let's wait and see, shall we?


Wait for what, seriously?

Do you think Angela Merkel, that old stasi horse is going to save'em.

Maybe it's putin, he's gonna ride in on a white horse.

or, maybe the Germans are going to wake up and start wondering who actually "died" in WWII, instead of weeping over those who survived it.

Maybe it's time for Germans to accept, that they are a minority in Germany ... how does the saying go. Have the wisdom to accept that you cannot change, and the courage to change that which you can.

As in Biden is Xenophobic since he doesn't want his political opposites in this country.