Is The Ukrainian Army Using White Phosphorus on Its Own Citizens?

page: 1
31
<<   2  3  4 >>
log in
join
share:
Corruption Exposed
+6 more
posted on Jun, 12 2014 @ 01:25 PM
link
There are several videos floating around which allegedly claim that the Ukrainian Army is using White Phosphorous on it's own citizens in the Donetsk region. I first came across this on LiveLeak...

Here is another alleged video depicting the same thing from a different angle or from a totally different incident.

I have also seen these videos on Youtube and Twitter throughout the day while I'm at work. Many people are claiming that this is old footage from Iraq, and I cannot confirm or deny that claim. The counter claim to this being in Iraq, is that people are allegedly speaking Russian or Ukrainian (in the first video).

My first concern is to find out if these videos take place in Ukraine or Iraq...I do not want to promote a hoax and would like to expose this as a fake if it does in fact turn out to be hoax.

I would like to politely ask my fellow ATS members to assist me in verifying this.

If white phosphorus is being used in the Ukraine then this may be a major escalation. It could be a ploy by the West to try and pressure Russia to respond to justify further escalations (just a theory). Either way, if true, the Ukrainian Army should not be using white phosphorous on it's own citizens.

I do know that it's an incendiary weapon and there are laws on its use:

According to the Protocol III of the UN Convention on Conventional Weapons governing the use of incendiary weapons:

Honestly, I do hope that this is a hoax because the last thing I want is an escalation with this kind of weapon - it may pave the road for nastier weapons to be used.

Is this real? (I need your help guys)

And if it is real, what are your thoughts on the Ukrainian Army using White Phosphorous on its own citizens...

If these videos turn out to be a hoax, can this thread please be placed in the Deconstructing Disinformation forum as this is where the thread would belong if the portrayals of the videos are fake (in my humble opinion of course).

Corruption Exposed
+1 more
posted on Jun, 12 2014 @ 01:57 PM
link
Please note that I welcome everyone's opinion, but please do not present your opinion as fact unless you can back it up. These threads usually cause some members to react out of bias with complete disregard of any facts and evidence.

At this point this is purely speculation without much to go on in the way of evidence or facts.
edit on 6/12/2014 by Corruption Exposed because: (no reason given)


It looks the same.

Thanks for the response Buster

Personally, I'm very confident that these videos depict white phosphorous. My concern is to distinguish whether or not this is taking place in Iraq or the Ukraine. People on social media are arguing about where it's actually taking place...neither side has made a compelling case to back up their claims. I'm no expert linguist but it does sound like they are speaking Russian in the first video though.

Peace.
edit on 6/12/2014 by Corruption Exposed because: confident, not without doubt

posted on Jun, 12 2014 @ 02:10 PM
link
If it is not being exploited and blamed on Russian terrorists inside Ukraine... then it must be Iraq. Could be Palestine. I remember Israel denied using it on them back in 2006 I believe.

posted on Jun, 12 2014 @ 02:12 PM
link
US used it on Iraqi citizens. If this gets a lot of media attention, then they better think about charging Bush junior with war crimes. Personally i understand its a big deal, but it is War, the enemy could care less how the person dies. whether he catches a bullet in the lung and suffocates or bleeds to death, or white hot phosphorus burns through his whole body, leaving a gaping cavity.

Source of the second video:

Thank you, so it definitely appears that the second video is from Iraq.

Can anyone verify which language is being spoken in the first video?

Russian or Ukrainian, from what I can tell.

posted on Jun, 12 2014 @ 02:32 PM
link
I suppose you can split audio video and inject Russian audio if you like. But I suppose it comes down to where the source of video came from

posted on Jun, 12 2014 @ 02:32 PM
link
I suppose you can split audio video and inject Russian audio if you like. But I suppose it comes down to where the source of video came from

Thanks for sharing that

Whatever's in that daytime video is less visible. Most likely due to the camera which is being used and the day light, but part of me fears it may be CGI but I am not sure as it does look real, just not as visible as the other videos.

Hopefully we can have more members share their analysis.

The video you shared, and the first video in the OP make it seem to be true.

I could be wrong though...

From the daytime video it looks like a type of smoke-screen ammo, using WP, also it seems the rounds were shot in an area somewhere on the outskirts of the city (Semenovka).

Please forgive me if I am wrong, but isn't it illegal to use WP during the daytime?

If so, then they are using it illegally - most likely against civilians ( I cannot confirm this ) .

Thanks for your feedback...

I have no reason to be uncomfortable in answering your question: I don't live in either Ukraine, nor Russia, but still pretty close, in Romania.

Also from what I can make out of the video, they seem to be filming in an uninhabited area just south of the Kramatorsk airport, controlled by the Ukrainian troops. At times during the video gunfire can be heard, so it could make sense that they use WP to create smoke-screens to protect their troops guarding the airport.

And as a side-note, the journo reporting this is Sasha Kots, a Russian journo from Komsomolskaya Pravda, who has been banned from entry into Ukraine some time ago but seems to pop back in time and again.

LE: My attempt at geolocation: 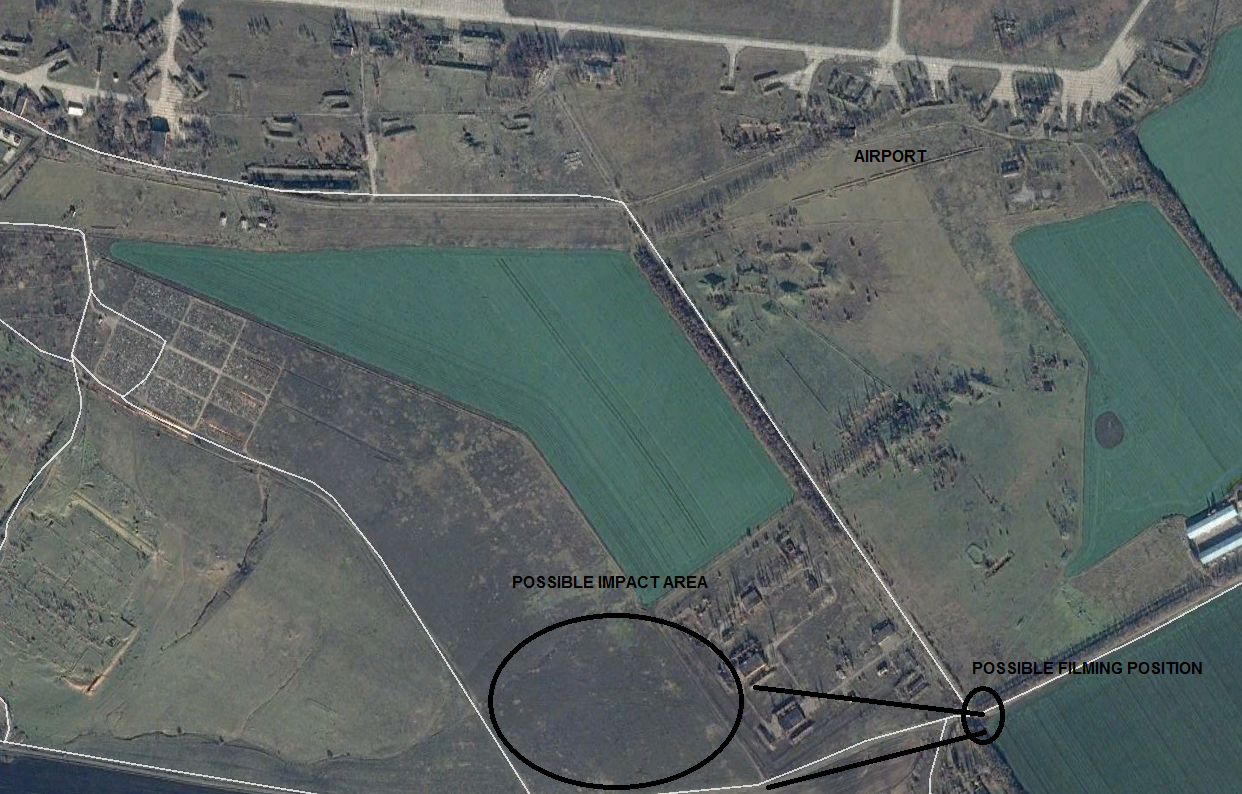 If you don't mind, in your opinion, do you believe it to be true that they are actually using WP in Ukraine?

I'm starting to think that this is the real deal, minus the second video of course.

According to the wiki page on WP:

There are multiple international laws that could be seen to regulate white phosphorus use.[93] Article 1 of Protocol III of the Convention on Certain Conventional Weapons defines an incendiary weapon as "any weapon or munition which is primarily designed to set fire to objects or to cause burn injury to persons through the action of flame, heat, or combination thereof, produced by a chemical reaction of a substance delivered on the target". The same protocol prohibits the use of said incendiary weapons against civilians (already forbidden by the Geneva Conventions) or in civilian areas. The convention also defines weapons which are not to be considered to be incendiary weapons.

There are videos on YT of the US Army training with WP rounds for the purpose of creating smoke screens, so I would say yes, it probably is used, but not for attacking population or whatever Russian media is claiming it is used for.

I would agree with you in regards to the third video that a member shared later in the thread, but the first video in the OP with what appears to be Russian speakers, then they would not be using WP as a smoke screen (that being if the first video can be proven to be true).