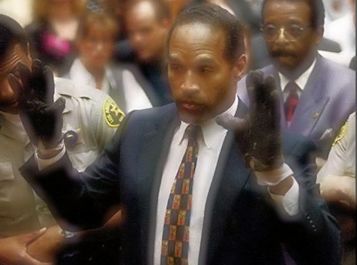 OJ Simpson is locked away in a jail cell in Nevada these days for kidnapping and armed robbery in 2008. However it is the events surrounding OJ from 20 years ago that captivated the Western world.

On June 12th 1994, Simpson's ex wife Nicole Brown Simpson and Ron Goldman were found dead outside Nicole’s Los Angeles home. Their throats had been slashed and police rapidly made Simpson their Prime Suspect.

Instead of turning himself in for questioning Simpson got into a white Ford Bronco and so began a police chase across L.A. The pursuit of OJ Simpson was beamed live by satellite across the globe from news helicopter mounted cameras.

Here are some lesser know details of the events : According to a Nielsen survey said the trial verdict was the third most "impactful" televised happening of the last 50 years, behind the September 11, 2001 attacks and Hurricane Katrina.

At the end of the chase police found $9,000, and a fake beard and moustache in the Ford Bronco.

The Goldman family have received less than one per cent of the money the millions of dollars in damages Simpson was ordered to pay them at the end of the civil trial.

The Ford Bronco chase happened on the same day as the opening ceremony of the 1994 football World Cup in Chicago. The 2014 tournament opens in Brazil exactly 20 years to the day.

Next came the sequel - ‘The Trial of OJ Simpson’ on TV. It fascinated audiences and ultimately split opinion and still does to this day. After this most bizarre episode in Simpson’s life he was acquitted by the jury with the enduring image of him trying to squeeze his hand into a glove found at the scene that could link him to the crime.

Simpson walked free but suffered from the after effects of the trial. The Brown and Goldman families won a wrongful-death judgment against him and were awarded $33.5m in damages. Although they have seen very little of it as stated earlier. His acquittal divided America - polls showed that while black Americans overwhelmingly believed Simpson was innocent, white Americans largely thought he should have gone down for murder.

OJ became a celebrity outcast was often heckled in public and could never take back the life he once had. Eventually Simpson ended up in a jail cell for another crime where many believe he should have been sent a decade earlier.


But was he really guilty of the murders back in 1994 and his trial a miscarriage of justice?

posted on Jun, 12 2014 @ 07:41 AM
link
I saw that on the news and thought about how fast time flies. I remember being at work waiting for the verdict to come down. I was in the "Guilty as hell" camp and that is where I have remained until this very day. It's unreal to think that it was 20 years ago.

I figured even then that if they didn't get him then.... It wouldn't be long. And here we sit. He's pulling a lot of time for his latest crime.

I keep thinking that the same thing will happen to Casey Anthony one day as well. Hoping may be a better word where she's concerned though.

There's not anyone alive that can convince me that he didn't do it, so I really don't care why he's in jail right now. I call it "karma" and roll over to go back to sleep.

It was a high stress case for sure and one was either really against him or really for him. There wasn't a lot of grey area going on back then.

If the glove does not fit... You must aquit will live on forever. He certainly didn't help his case with that last book he tried to have published either. I guess at this point it doesn't matter if he was guilty then or not, he will not get out of jail before he dies this time I don't think.

But yeah... I am getting really old because time just keeps speeding up. It's hard to believe it was that long ago. Time marches on, as does that white ford bronco I'm sure.

His entire wretched history is just another example of an intentionally flawed system, OJ should have done time for the crimes,but he didnt and arranging to put him away later based on different laws DID NOT FIX THINGS.

Please not this pig,anyone but this idiot,this guy should have been pushing up daiseys long long ago.

I understand this is History,but jeepers what a sordid chapter.

I will have to endure it for educational purposes as long as anyone young knows he was as guilty as hades and the SYSTEM ALLOWED HIM TO WALK AWAY.

Do not think any type of Justice was found,he should have been in Prison for the murders he committed.,and if anything is to be remembered about this pig it should be that the crooked system we are all afraid of supported him in his crimes,it did not hold him accountable.

posted on Jun, 12 2014 @ 08:22 AM
link
Better than remembering the Simpson case would be remembering what was going on at the same time as the trial. What shenanagins were being hidden from the public while this overly hyped slosh was being spooned out to the audiences night after night. What conversations were never held over water coolers and lunch counters as people recounted the previous nights news of the trial.

You know what. I can't remember. Even though I paid little attention at the time. I recall knowing that the trial was a smoke screen, hiding more important happenings from our view. It saddens me that now, I can remember the OJ crap and cannot remember the other stuff. Wasn't part of it the constant bombing of Iraq by the Clinton administration and the thousands upon thousands of innocent children killed by that incessant bombing?

Who cares. Lets drag out his story once again and glorify in how we remember the crap and forget what is important.

I remember watching this trial back then. When they made him put those gloves on with latex gloves, I immediately thought to myself, of course they're not going to fit! Leather gloves are not going to easily slide over a hand with latex gloves on! I think it was OJ's defense tactic to make it look like those gloves didn't fit. If they were tight fitting gloves, the latex would be just enough to make them too snug to fit. I remember how he spread his fingers apart when displaying it to the jury, another tactic to make it look like the gloves were too small.

The judge should have told him to remove the latex gloves. What were they afraid of? OJ picking up a germ from inside the gloves?

posted on Jun, 12 2014 @ 11:28 AM
link
The glove shrank from the blood on it ... and OJ didnt' take his arthritis meds for a few days before in order to swell his hands. Putting the glove on wasn't a last minute thing by his defense ... it was planned out.

A few months back he threatened to starve himself to death ... go on a hunger strike. Apparently he didn't do that. The guy is still alive. Oh well ...

After 20 years* OJ must surely be nipping at the heels of the "real killer".

here is an interesting tidbit from the night of the bronco chase...

david hasslehoff was doing a music concert that night...on tv "PAY FOR VIEW"...talk about the worst timing in history....he finished the concert and they had to tell him about the bronco chase that "everybody was glued to there sets watching during his concert.

yeah oj is guilty as sin

As good a performance the man ever gave on screen.

posted on Jan, 11 2015 @ 05:42 AM
link
he is guilty for sure. i read the transcripts from the murder trial and the other one. OJ testified at the 2nd trial. There is no other possibility other then OJ murdered 2 people. He wasn't even good at it as he left blood, shoeprints, hair, hat, gloves, tire tracks. People seen his car on the highway speeding away.. How can he live with this is the real question.