posted on Jun, 7 2014 @ 05:19 AM
link
Magnetic levitation is a method by which an object is suspended with no support other than magnetic fields. Magnetic force is used to counteract the effects of the gravitational and any other accelerations.

The two primary issues involved in magnetic levitation are lifting force: providing an upward force sufficient to counteract gravity, and stability: insuring that the system does not spontaneously slide or flip into a configuration where the lift is neutralized. 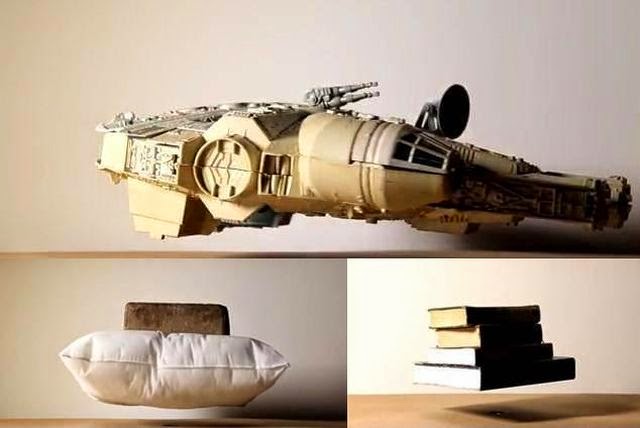 This magnetic disc (CLM 2 magnetic levitation module) as will be shown in the video is huge and powerful and can float objects weighing near 20 pounds.

The magnetic disc is hidden under the chessboard, for instance and we see floating books; a fake book and hid the magnet in it.

Or the pillow; the visual of a floating pillow supporting a 7 pound brick is fun to see.

And then the last one, the Millennium Falcon, so to see it floating just brings it to another level of reality.

Another project is an amazing Water and Sound Experiment.

Turn on the water and watch the magic begin.

Water turning into the known shape of DNA, awesome I need to try that one out!

Have a top weekend ATS, thunderstorms are heading my way in England right now, so I'm off to watch natures fury

There's nothing I need levitating right now, but the wow and fun factor would be huge!
Oh, wait, I could use it for re-positioning all my furniture.

Terrific thread which I hadn't seen before. Opens the mind to the possibilities of whether the ancients knew about this technology and managed to utilize sound in some way to move things up mountains and from quarries etc. Deep in the recesses of my ever failing memory I seem to remember an odd mention of a sound being made, I know it was to do with moving stones in Egypt but that is all. If I can ever find it again I will dig it out and let you know.

By the way where in England are you? I am on the south coast and have sunshine, hope you don't live near - no disrespects.

Another project is an amazing Water and Sound Experiment.

Turn on the water and watch the magic begin.

Water turning into the known shape of DNA, awesome I need to try that one out!


Keywords from the Description for the video:

The effect that you are seeing can't be seen with the naked eye. The effect only works through the camera.

originally posted by: yuppa
the water experiment i call bs on. it looks like its cg. DID they use a highspeed cam?

I agree if the hose wasn't moving, maybe good but all I can see is a hose moving and the vibration controlling or stabilising the movement so a big bs

This technology is amazing. the implications are astounding.

posted on Jun, 7 2014 @ 08:59 AM
link
There's a thread here I watched recently (ATS) where a scientist is stood on a piece of wood compressing to neo magnets (lifts 100kg).
I used the same principle to create a hoverboard unfortunately the bloody thing kept picking up loads of metal debris and was a bugger to steer.

originally posted by: Shiloh7
a reply to: skyblueworld

Terrific thread which I hadn't seen before. Opens the mind to the possibilities of whether the ancients knew about this technology and managed to utilize sound in some way to move things up mountains and from quarries etc. Deep in the recesses of my ever failing memory I seem to remember an odd mention of a sound being made, I know it was to do with moving stones in Egypt but that is all. If I can ever find it again I will dig it out and let you know.

By the way where in England are you? I am on the south coast and have sunshine, hope you don't live near - no disrespects.

West Midlands,we had just a mild and very weak thunderstorm, very disappointing.
I have read about that theory as well,but I only seemed to find this:
Link

There's a stone in India where the guru has people stood around it and they hum/sing/chant which makes the stone rise.
Apparently you have to watch your toes when they stop and it drops to the floor.

We can also finally make hover boards out of this!!!!!

posted on Jun, 7 2014 @ 10:12 AM
link
The hose in that second video was fastened to a speaker in which a person could generate a 23Hz, 24Hz, and 25Hz sound (with one of a number of computer, analog and digital audio generators that have been out for decades).

If you have a camera that records 24 frames per second (most do, but some are quite adjustable), the rest is just gravy...on video.

As for the first video, I'm checking out the site right after I click on reply.

EDIT: Star and Flag for sheer entertainment and compelling the reply if nothing else.
edit on 7-6-2014 by lagnar because: S&F

Hardly new. We've discussed and showed the work of John Hutchinson before who has done this 20 years ago. No one that I know has topped his initial discoveries and youtube demonstrations.

posted on Jun, 7 2014 @ 11:58 AM
link
Please make sure that if you have kids they see these types of videos,be aware that the education system is a fraud and this stuff hasnt been "just discovered' it is all suppressed knowledge,so ensure that children see this stuff so they have the concepts and ideas in their minds lest we ever have the internet stolen from us all.

The more kids in schools see these amazing discoveries the more insurance we have that the knowledge can not be easily suppressed again.

We need to put the possibilitys of these concepts in our childrens minds where they are safe because the books have systematiclly been destroyed as we have went to the internet and the publishers have over centuries been selectively deleting many critical books from existance by not reprinting them after we destroy all of the existing volumes to go to the internet.


This is the way of the future and these videos and ideas and concepts are awsome. Lets get them out there into the childrens imaginations before they are suppressed again by intention or some act of nature.

No one that I know has topped his initial discoveries and youtube demonstrations.


it is all suppressed knowledge,

This is the way of the future

There is Suppressed from Humanity completly and there is suppressed from the current mainstream,all of the data we yearn to learn is already in the public domain and most is available online now but you need to go wayyy back to the 30s and earlier to avoid current suppression methods,if you go back centuries then you need to also look at the Cabals that controlled humanity at those times to properly map their influences and their metods of suppression and also what they felt needed to be suppressed.

TPTB had no way of predicting how technology would evolve because they had to release so much critical data to Industry to develop it peripherally that they lost complete control,and as technology developed at rapid paces they ran into a wee problem,the things they thought they needed to suppress in the 1800s for example turned out to be the wrong things and the people they suppressed in many cases turned out to be not nearly enough impact.At the end of the day we can see that there were many many places they could not anticipate trouble coming from and they simply bit off more than they could chew.

So yes some things will be available in different areas,AS THEY SEE FIT TO RELEASE IT TO HUMANITY.

Suppression has different degrees to it, and it matters not because suppression was never going to be a long term solution owing to the fact that natural sciences explain many of the concepts better than current academia can.

No one can stop the Hutchinsons of the world unless they eliminate all technology and also the curious human mind.

The real act of suppression has been not letting all of humanity try to unravel and decipher the knowledge left for us by past Cycles of Humanity,now TPTB are in a panic because people all over are building things based on this data which was successfully suppressed until the internet came along.

It is not enough that they give it to us now,when they choose to,Humanity deserves access to all knowledge,with no barriers.

There is no forgiveness for people who sat on high technology and allowed so many humans to perish in the process.

I know we have Mag-lev trains everywhere awsome link ,I want to know why we didnt have them 200 years ago before we destroyed so much of our planet,and when i KNOW the data was available and that it was not promoted or utilised in favor of less optimal destructive means i get concerned on behalf of Humanity.

Medical data suppression has been the most devestating to humanity and the Humanitarian terrorists behind it need to all be in prison as we speak.

You kick down the doors of the Vatican and the Smithsonian and every other place that OUR knowledge has been hidden AND THEN imprison those responsible then we will finally see real Humanitarian progress.

Stopping the bleeding is not good enough,the wound needs to be cauterised.We need to see accountability and an example set so Humanity doesnt need to go through this suffering ever again,what was suppressed in the past can be suppressed in the future if precautions are not taken.

No one can even try to sy that Edisons stuff was anywhere near as valuable as Teslas,and we can PROVE that there was artificial suppression of Teslas work in favor of Edisons to create financial gain,and this has screwed up our entire planet,we currently have an entire global infrastructure designed to transport energy THAT WE NEVER NEEDED,we DID NOT make a natural error in progress,we were intentionally held back,and this my friend was a crime against humanity,it was not "just a business decision".

Now that we all have an accurate Global Vison we can pick off these trouble making Humanitarian Terrorists wherever they go to ply their trade,there are no borders to hide behind anymore, we can trace global money and influence and impacts right to their front doors anywhere off or on-planet and hold them accountable.