Something Ate This Great White Shark… But What?

Farewell and adeu to you fair Spanish lady.

No, cant stand the stuff! anyways, the ketchup is for the chips

originally posted by: rickymouse
Something big and hungry. Godzilla

It could have been a lot of little things that were hungry...
The Japanese really like fresh sushi and doesn't the fin supposedly possess powers only duplicated by Sildenafil. Of course, they'd have to race home and not wear sweat pants to work...

posted on Jun, 6 2014 @ 06:38 PM
link
Maybe the shark went down the ravine to scrape it off, then it picked it up and swallowed it. It went to shore later and pooped it out to return it to the people. A nice shark like that deserves an applause.

It doesn't have to be the way that they said it happened. That is just one possible theory.

originally posted by: PhoenixOD
Its a large assumption to say that the shark was eaten. It could be that something attacked it and bit a chunk out which had the tag. Maybe another shark.

I missed your post earlier, and I was thinking the same possibility, but more convinced that it was Orcas. But now I realise that another Shark is not a good idea, unless there is something about them that is not fully understood either.
The Shark though, can have a warm stomach to 14°C not near the temperatures given in the video.
So now I do understand why the Ozzies were puzzled, and that's the initial dive down to over 500Metres, as far as I know, there is no record of an Orca doing a dive like that and besides, in the video I posted it is obvious there is no need, they simply flip the Shark over on it's back and it's toast, and not much need for the Orca's to go diving unless they have some kind of extreme victory ceremony. So I'm sort of out on Orcas and Sharks now, maybe there was something not right with the tag in the first place?
I'll add to that other deep sea divers like Penguins and Seals, Seals being a good candidate too since they will eat the odd Shark, and certainly the meat, if it just happened to be around, and could also explain how a tag ended up on the beach so near. 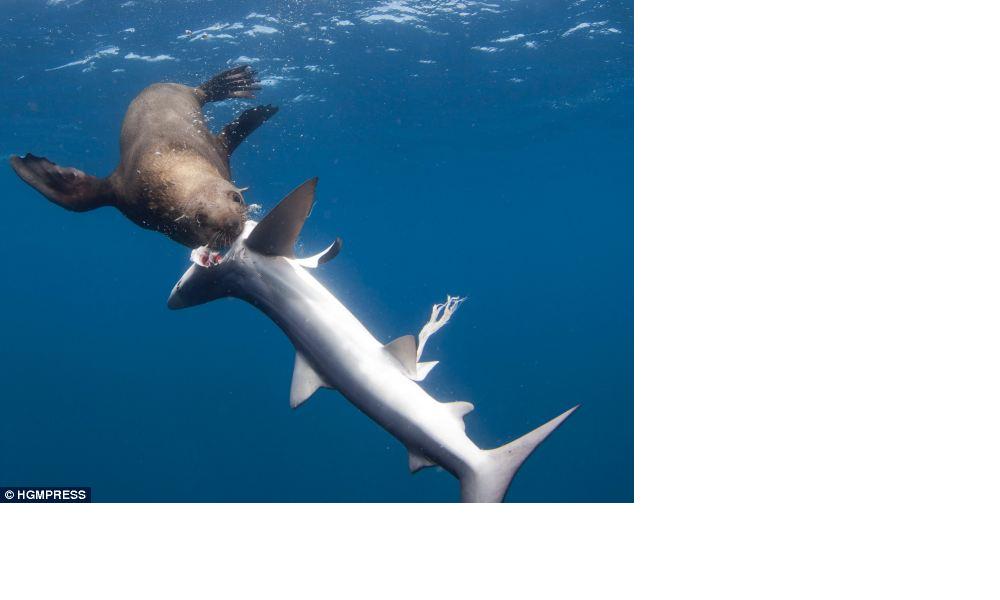 While a Great white is not likely to have been killed by a Seal, the Seal may just have got a hold of the tag feeding on the remains of the Shark likely killed by an Orca, and curiously enough, both Orcas and Seals only eat particular parts of Sharks, including the liver.

Reminds me of this scene

I saw this story earlier today. Here's a link to the article.

The recovered tracking device showed a rapid temperature rise and a sudden 1,900-foot-deep plunge. It stayed there for many days, moving around and occasionally ascending to go down again until it finally reached the shore. That's all the information that scientists gathered from the tracking device.

They did find out what ate the shark though. It was another great white.

According to the researchers who investigated the puzzling case, it was a "colossal cannibal great white shark."

The scientists claim their new data matched all of the tracking information from the disappeared shark: The body temperature they registered was the same and the size of the cannibal great white shark—which they estimated to be 16 foot long and weigh over 2 tons—could easily pull off the same speed and trajectory captured in the tracking device.

Big shark....had to be something huge. From the timing, it's possible it was even swallowed whole. Knowing where the tag was, they know where they could start looking, but they'd better take a really big boat! That's not a cruise I want any part of!

posted on Jun, 7 2014 @ 03:07 AM
link
There was a documentary recently on the Discovery channel about a suspected megalodon off South Africa. It took out a rather large fishing boat. In the same general area it was photographed by a government beach watch guard, The fin was something like 6' and it was pushing a whale sideways. However, the large fin was like 16' from the whale. They said it had to be approximately 30' in length at least. Later it hit a research ship that was doing part of the documentary. They had sprayed out a chum slick 600 yards wide by somethinng ridiculous like 2 miles. They had put divers, one a shark expert, in a cage out back. On the sonar there was many great whites ranging from 12-18' in length and suddenly they all disappeared. As they were talking about it something hit the side of the ship and the power flashed out for a few seconds. The cage was hit and cartwheeled across the water. The divers were thrown out and somehow managed to not be eaten and were recovered. Later, they had a camera that was watching an oil rig operation at the well head and this huge shark went by in the background that was at least 30' in length. It was incredible. I still have it on DVR. Note: It has been a couple of months since I saw it, so the exact measurements may be off.

The show was called: Megalodon: The Monster Shark and was a 2013 documentary off the coast of South Africa. OK I just checked and it was on the Discovery Channel. I highly recommend you watch it if you can.

Searching for it there seems to be some controversy about it being faked. However, if you watch it, I don't see how it could be. Discovery Channel is defending it apparently.

ETA: I guess they are saying up to 60' in length

Check out this section: WWII U-Boat photo with shark behind them

My guess is that the shark was never eaten at all and the tag simply wasn't attached properly.

The tag came loose and was then swallowed by something.

There is no evidence that the shark eaten.

They did find out what ate the shark though. It was another great white.

According to the researchers who investigated the puzzling case, it was a "colossal cannibal great white shark."

The scientists claim their new data matched all of the tracking information from the disappeared shark: The body temperature they registered was the same and the size of the cannibal great white shark—which they estimated to be 16 foot long and weigh over 2 tons—could easily pull off the same speed and trajectory captured in the tracking device.


It also says in that link, "It makes sense: The only thing that could reasonably eat a shark is something that resembles a shark, only bigger." That's simply not true. An Orca can kill a great white by using brain power and tactic, and very little violence. When a shark is turned on its back, it immediately goes into a coma and just stays there, the Orca simply holds the shark in its jaw until the shark dies, it's been filmed, and in that case the Orca brought the Great white to the boat like a dog with a ball.
below is the short version, but with an added explanation,

originally posted by: MagicWand67
The only part of this story we can safely assume is that the tag was eaten by something.

That's right, and once you know for instance, an Orca can kill a Great White, anything goes after that. Big seals can dive very deep and easily do the first fast dive, so can penquins, and both of those would feed on a Shark's remains, and there would be plenty as the Orca goes for particular parts like the liver.

Something Ate This Great White Shark… But What?


A very hungry bigger shark. That's what makes the most sense to me.

posted on Jun, 7 2014 @ 07:23 PM
link
Orcas would be high on the list, but I wouldn't rule out some of the larger beaked whales (such as Cuvier's) or even sperm whales. From what I understand, orcas tend to feed nearer to the surface than some of the other large cetacian species.

And of course there still could be a bigger shark.