Detroit's multi-decade decline is old news -- most of us have seen photo-montages comparing conditions in the Motor City now with those in the 1980s, 1970s, or earlier, when Detroit was the fourth-biggest city in the US and seemingly on top of the world.

What is new is the fact that the pace of the decay has accelerated to an almost unimaginable degree over the last 3-5 years alone. This is no longer a slow, gentle decline; the city has become more like something you'd expect to find after the sack of Rome than in the modern "developed" world.

Keep in mind the comparisons in the link above are all over the space of a few years.

This topic should be of interest to anyone keeping an eye on social decay, urban blight, economic crisis, and even survivalism (watch the post-apocalypse unfold in real time!)


Two samples from the slideshow: 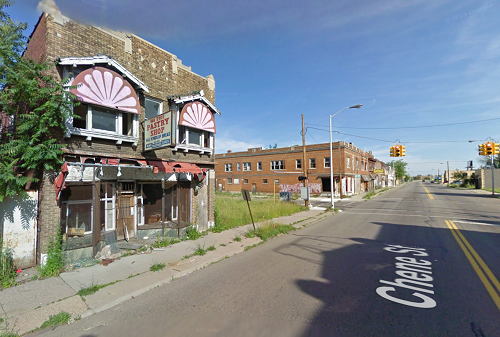 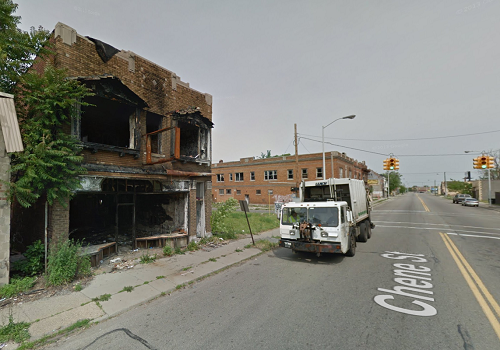 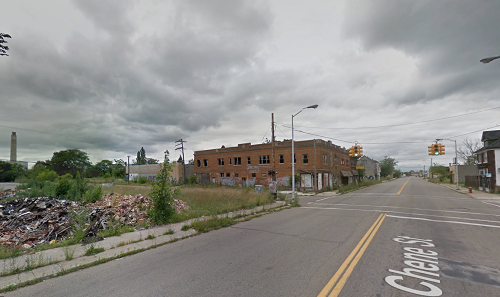 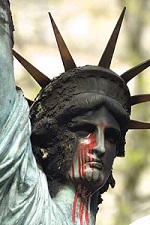 posted on Jun, 6 2014 @ 07:27 AM
link
This is just saddening. I especially liked that yellow house...
But then again, this is the cycle of society. We prosper and we decline and we go around the cycle until there's no more energy left to keep the wheel spinning.

posted on Jun, 6 2014 @ 07:28 AM
link
Is it any coincidence that the sky grows darker and bleaker as the years progress in all of these examples above? If nothing else it adds to the effect, which is to make you sick to your stomach. What a terrible sight. There's even a noticeable difference in the vegetation, which may have to do with the photos being taken in different months, but still...

Wow! That's kind of depressing. But it should be shown so that people wake up to what is going on around them and what kind of city leadership is allowing to happen. It could, and is happening all over.

At the same time though, it also makes me thankful for what I have.

posted on Jun, 6 2014 @ 07:30 AM
link
Its like watching a building become a decrepit zombie in a matter of years. not hundreds of years, not even tens.

Is Americas plans for its crumbling city's to just ignore them and they will just go away?

posted on Jun, 6 2014 @ 07:39 AM
link
Would it not benefit both the banks and communities if instead of a foreclosure where everone loses, communities are ruind, homes are left to rot and become worthless, the banks should agree to accept maby 50% or even 25% of the monthly repayments.
edit on 6-6-2014 by NeoSpace because: (no reason given)

originally posted by: NeoSpace
Would it not benefit both the banks and communities if instead of a foreclosure where everone loses, communities are ruind, homes are left to rot and become worthless, the banks should agree to accept maby 50% or even 25% of the monthly repayments.

Maybe, but judging by the looks of things I'd say the banks have made out pretty well - the community on the other hand....

Yea, housing prices are on the rise again. Nevermind the HUGE inventory of unlisted houses the banks are just sitting on. Houses that were foreclosed on, kicked the occupants out, and are now sitting empty. Houses that the banks easily could have let the occupants stay in until the bank is ready to sell it. Nothing makes me more furious than banks do. Our grandparents from the 30's had it right not to trust the banks.
edit on 6-6-2014 by Krazysh0t because: (no reason given)

posted on Jun, 6 2014 @ 07:51 AM
link
A picture is worth a thousand words.The city is dying just as fast as the country's infastructure.

It really is kinda sad what has happened to Detroit, it's like the proverbial dog dirt that needs tending to with a stick. Hopefully Tesla can slowly build up into something Americans can build and be proud of again.

Just let Detroit die. It was never a nice place. Other than great music, it never had much to offer. Other parts of the country are booming.

posted on Jun, 6 2014 @ 08:11 AM
link
It's pretty amazing how quickly nature is reclaiming those streets. In just two or three years they are almost turning into wilderness.

Wow ... that is just like a slow motion nuclear bomb going off!

I wonder what detonated that?

posted on Jun, 6 2014 @ 08:38 AM
link
But, there have been neighborhoods in Detroit that were walked away from for as long as I can remember. I had relatives down there and we used to see these streets when riding around. Many big cities had sections like this. The neighborhood goes to hell and everyone leaves.

Those things run in cycles, many are caused by the middle class leaving to a better neighborhood and the houses sit vacant. I am sure that Detroit is worse now, so is Flint.

In 2010, Detroit Mayor, Dave Bing, proposed a radical plan to bulldoze a quarter of the city, in the way of abandoned, foreclosed homes, turning it back into pre-1950's farmland. Several other cities within the United States have already instituted this program in conjunction with the banks that hold title to the dilapidated homes. Flint, Michigan, Cleveland, Ohio, Youngstown, Ohio and Chicago, Illinois are just a few towns in which banks are demolishing homes in conjunction with city government, rather than placing them for sale. These burned out homes in Detroit have become safe havens for gangs. In the case of the carjacking, beating and murder of 21-year old Matt Landry, the murderers took him to one of these homes, scheduled for demolition, to murder him. These conditions are not new in Detroit, but now far more wide spread. Just as in the movie "8 Mile", filmed in 2001-2002, a child was taken to one of these abandoned homes to rape her, followed by youth torching the home. Yes, this was just a movie, but it seems that fact is following fiction with these abandoned homes being used by thugs as an open door to commit crimes. If there had been nowhere to take Matt Landry to kill him, perhaps he would still be alive.

But what about those homes still occupied remaining in the abandoned neighborhoods scheduled for demolition? The law of Eminent Domain would come into affect to force the remaining families from they're homes, paying the "Fair Market Value" for they're homes. Unfortunately, given the market in Detroit, these families might only receive as little as $1,000 for they're "roof over their heads" that may have been paid for free and clear. While bulldozing may help to alleviate the arson problem as well as the supply and demand problem, it may cause a hardship for those barely hanging on.

Are some of these photos a result of the demoltion program? I find it hard to believe that these homes would have collapsed and/or completely disappeared in 2-4 years.

In my opinion, it is a good thing that they are bulldozing most of the abandoned parts of the city. It would be nice to see it return to farmland. I just hope there are people who are saving as much as they can from some of the more architectural significant homes and mansions. There is this company: Architectual Salvage Warehouse, but I wonder if they are able to keep up with all of the buildings being demolished. It's a shame, because there were some truly stunning examples of architecture and craftsmanship in that city that will be lost forever.
edit on 6-6-2014 by jtrenthacker because: words is hard

Detroit provided a lot to the nation throughout it's history. But much like society, when it is no longer needed it is kicked to the curb.

originally posted by: nfflhome
Unions, why pay someone $25-$75 an hour when someone else will do the same job
for under $25 an hour. Unions had their day but they where a big part of the cause along with the
elected city government.