Scientists working in the Patagonia region of southern Chile have unearthed what is being called one of the largest dinosaur graveyards to be found to date.

Located in the country's Torres del Paine National Park, the graveyard contains nearly 50 entire ichthyosaur fossils. The prehistoric creature has been described as a fast-swimming “fish-lizard" similar to a dolphin that lived during the Mesozoic Era, about 245 million to 90 million years ago.

"This great ichthyosaur cemetery, the way the remains are deposited, is unique," said Christian Salazar, paleontologist researcher and natural history museum curator, according to the Canadian Broadcasting Corporation.

The fossil remains, containing both skeletons from embryos and adults and likely killed in a series of catastrophic mudslides, were preserved in deep-sea sediments that were later exposed by the melting glacier

Amazingly, not only the bones have been preserved but also some soft tissue on a number of the fossils
The largest skeleton found measures up to 16-feet long

Scientists believe that the Ichthyosaurs had died off before their land-dwelling brethren due in part to global depletion of oxygen in the oceans, possibly a consequence of volcanism
The mudslides that killed the Chilean creatures most likely disoriented and drowned them

They sort of resemble a cross between a dolphin and an alligator. 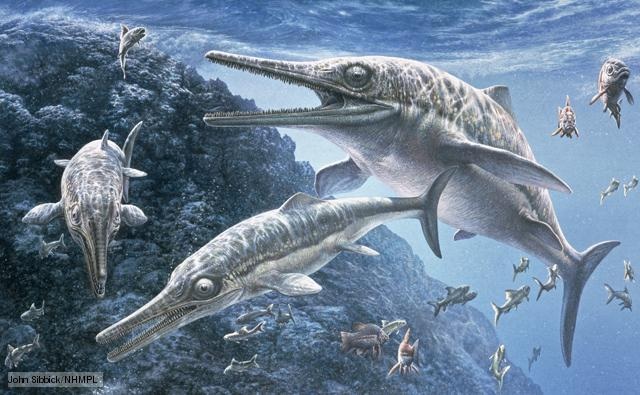 Nice find! Wonder how rare it is to discover soft tissue from dinosaurs.

They do resemble dolphins for sure, albeit a little funky in the face/teeth

I wonder about the soft tissue as well.

Could they possibly extract DNA from it?

Aww, that's a shame. I was already looking forward to Jurassic Park - This Time It's Real!

I think they are referring to the fossilized imprints of the soft tissue, not the tissue itself.

What an awesome archaeological find, must've been one fast mudslide to take out that many of them all at once. SnF OP!