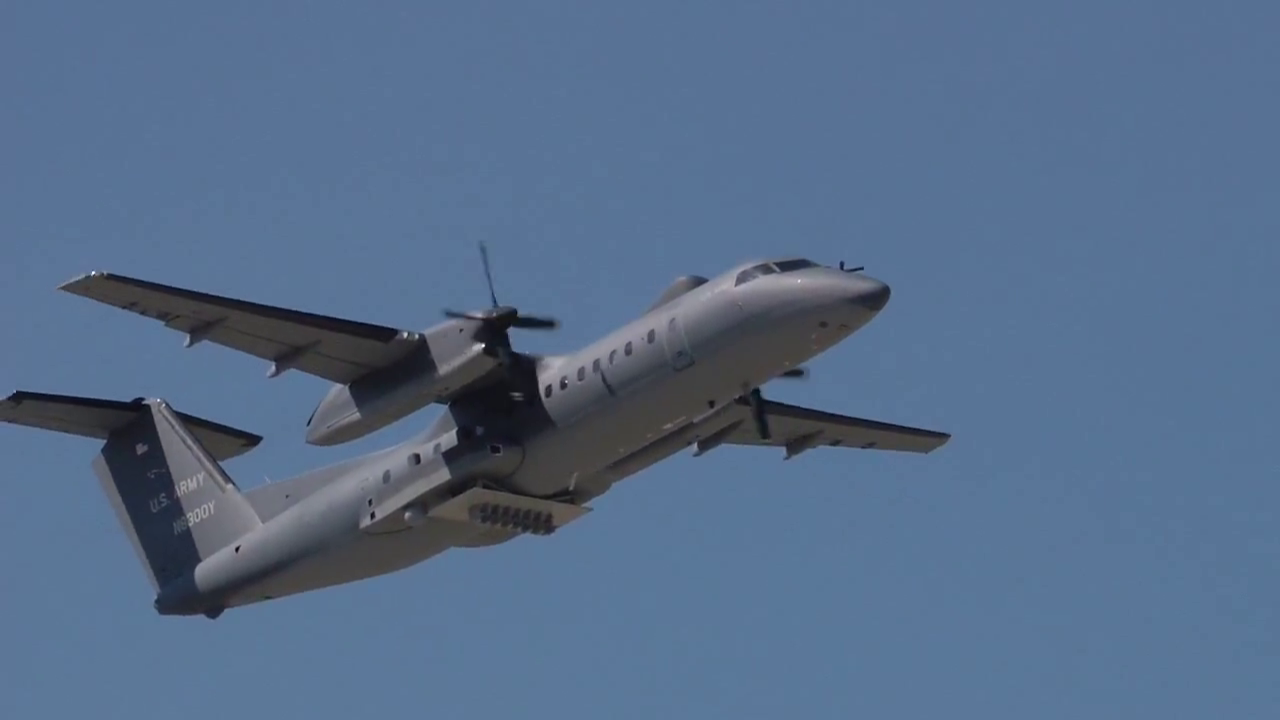 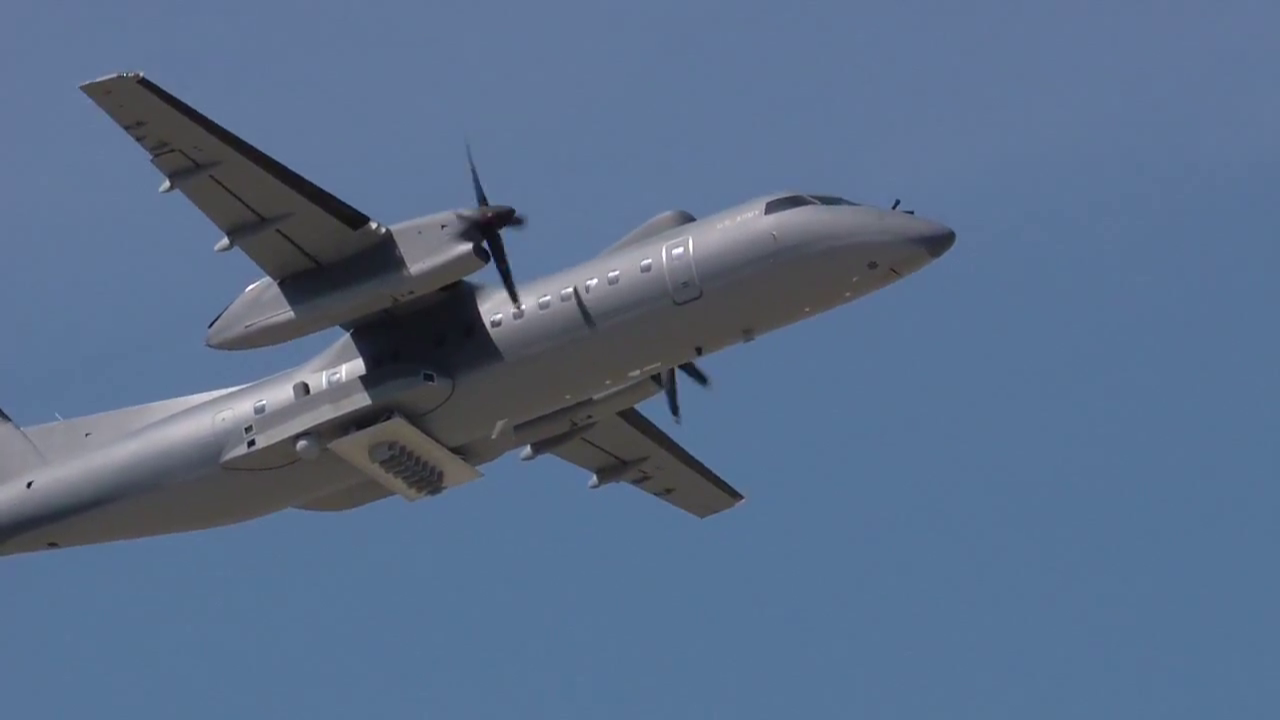 Beyond what you see here, I know nothing. Well other than Dynamic Aviation has all sorts of military contracts.

The plane is a De Havilland Canada Dash-8-100 but I don't know the military designation. The dome on the top of the fuselage appears to be satellite communication in nature. The equipment on the bottom rear may be equipment for signals intelligence gathering. The bulges above this device may be side scanning radar or infra-red as a semi-educated guess. One thought is this airplane may be a direct replacement for the EO-5 (DHC Dash 7) which is getting old in the tooth by now.

I have flown both of these planes in my civilian flying career and I must say the DHC-8 is a much easier airplane to physically fly. In addition, it is easier to maintain and cheaper to operate.

Dynamic Aviation is a fun place to visit. Nice setting in the country too.

I have taken a look at Dynamic Aviation's website and I must say they are just like most other start-up aviation companies. They want pilots and mechanics rolled into one...this tells me to run away from them because they aren't well organized and under funded.

Their pilot requirements are nothing but the absolute minimums for a flying job. Dynamic Aviation doesn't publish salaries and just say it's industry standard. They don't publish the true requirements for employment or true pay. "Industry Standard " is long hours at work with little pay...is this what they are saying? When I first started flying commercially, I routinely was on duty for 16 hours a day to only be paid 4 hours of pay. Most airlines only pay for time flying and not time on the ground. As my seniority improved I could bid for schedules that had more flying in the 16 hour maximum duty day. The true pay was only half of published hourly pay. My first airline, a first officer (co-pilot) with two kids could qualify for public assistance but would be fired for doing so. I'm not say Dynamic Aviation is this way but I wouldn't send them a resume!

Sorry, my rant is a little off topic but none-the- less a valid statement.

Did you take these pictures and/or video? Just curious.

This is one of what should be a total of two Dynamic Aviation DHC-8s configured with the Desert Owl system (www.globalsecurity.org...). The system was originally mounted on A-200T King Air types, but at some point in the last few years transitioned to this aircraft. While these planes say "US Army" on them, they're fully contractor owned and contractor operated. They Army reupped their contract to fly this type in Afghanistan as a so-called "Quick Reaction Capability" last February. They're scheduled to continue flying at least through FY15.
edit on 6-6-2014 by thatguy14 because: (no reason given)

The photos are frame captures from the youtube video. YouTube is fine if you want to make money. If I was there, I would shoot stills. Far better image quality on stills than video.

Dynamic has plenty of fiscal issues, at least on their commercial ventures. Maybe the military arm does better.

One of the worst paying companies in aviation, well at least that had the nerve to publish their rates, is Chalk Aviation. The do/did chase plane flight for General Atomics. Basically minium wage while on the ground and slightly higher when actually doing chase.

Note that the Janet aircraft have one steward that is also a mechanic. There is no monopoly on double duty these days.

I've flown in the Dash-8, or maybe that extended version. Kind of loud, but not bad for a prop plane. Skywest flies them on the left coast. On the right coast, they are your basic puddle hopper.

I have a copy of "Flying Cheap", the Frontline expose on Colgan Air. Not a promising picture.

posted on Jun, 7 2014 @ 11:00 AM
link
a reply to: gariac
The management in small airlines have only one thing in mine is to do everything as cheaply as possible. They are very aware that low experienced pilots want jobs and are willing to work for peanuts. They know that these pilots will be moving on when they have the minimum experience for a better airline so benefits never improve. Fortunately, I've only worked for one of these airlines. Management continuously threatened crews with firing if they didn't work beyond legal duty days. I left as soon as I had enough fixed wing time to get another job. BTW, three months after I left this airline had a accident trying to land below visual minimums killing all on board.

Colgan was no more or less than what the industry was in the late 1970's. The only problem was Colgan never changed for the better resulting in an accident due to an inexperienced crew in a bad weather environment. IIRC, it was a DHC-8 in Buffalo, NY. There was a time when Colgan was an improvement over the first company I had worked for.

As I understand it, Colgan was owned by a politician who operated by government subsidies to service small airports in West Virginia until airline deregulation. I know of one interesting event when a very attractive young lady was hired with the absolutely minimum flight time when more experienced pilots were bypassed in the late 1970's. I believe that practice was noted by the FAA in the Buffalo accident some thirty years later.

No airline is perfect including the majors and they all have shortcomings. With the last airline that I flew for I experienced three uniform changes in 6 months. To most this doesn't sound too unusual but we had to pay for them ourselves with a $12k salary. Each uniform set cost about $700. It was also my first experience with the Airline Pilots Association. Their chunk of my pay was 4% monthly. OK, they offered a bit of job security in an unstable industry. Several months later, I was a captain flying an EMB 110 making $13.5 annually when Eastern Airlines went on strike. ALPA decided to assess me $175 monthly to pay for their strike which really hurt. ALPA kept us apprised of their progress in their monthly magazine only to show an Eastern pilot sunning on the beach in Florida. I realized that I was making less than I did as a co-pilot so a guy making 10 times my salary could get a sun tan.

I'd better shut-up cuz I feel a rant starting.

posted on Jun, 7 2014 @ 11:15 AM
link
it seems more workers are becoming glorified fast food employees as far as wages go....this is happening in most every industry. the spoils go to the wealthy, and subsistence levels of income is becoming the norm. we have become a country run by oligarchs.
edit on 7-6-2014 by jimmyx because: (no reason given)

posted on Jun, 7 2014 @ 03:00 PM
link
a reply to: jimmyx
There seems to be something to your statement. It wouldn't be strange to think that a guy driving a $26m airplane would earn more than they do. I guess that it's like baseball with the guys in the minor league breaking their butt for the chance to go to the majors and the big salaries. Unfortunately, it wasn't until a few years after my retirement that I found out that the major airline that partly owned my airline had a "no hire policy" for our pilots even with a "merging seniority number list."

I think that the airline industry is a big scam! A few years after I left flying, the airlines started their own flight schools where student pilot paid the schools to learn to fly the entry level airplanes of that airline. This venture basically allowed the new pilot to pay the airline to hire them. With the money invested by the pilot, he would be working for free for a couple of years until he paid for his student loans from the airline. I guess it is like the old "company store" from the 1800's. Now, there are many colleges that offer aviation degrees so I don't know if this practice is still around. However, the major airline that own my company closed it down a few years ago for unknown reasons.

I was at the Napa Ca. airport a few years ago and noticed they had a JAL based flight school. It is history now.

posted on Jun, 8 2014 @ 08:47 AM
link
a reply to: gariac
I have never been shocked at the lengths these companies will go for corporate profit. Likewise, I will never understand why wantabe pilots spend more than they can ever make in several years of flying to get a minimum wage job. It's like my baseball analogy of minor league players wanting to play in the majors with the percentages against them. I fully understand an airlines desire to keep training cost down but to get free labor seems to be un-American to me. This training academy scheme would be on it's face seem to be illegal under wage and hour laws but I'm not a lawyer.

posted on Jun, 8 2014 @ 09:09 AM
link
a reply to: gariac
I'm glad to see the army getting larger airplanes after the Palm Beach Accords where the USAF took over all the airplanes over 12,000 lbs in certain categories. I have away from military and civilian flying for nearly 25 years so my information seems to be somewhat dated in that the army has been flying several types that are outside that agreement.

I'm not familiar with the systems that you sited like Desert Owl which is much newer than anything that I trained on. One thing that needs to be said is how impressive all these new systems are.