posted on Jun, 4 2014 @ 06:51 AM
link
It certainly doesnt seem to be under any type of control. The tumbling , straight path , no speed increase/decrease and no height change suggests whatever it is is just being blown by the wind.

originally posted by: skyblueworld
a reply to: Trueman

Yes because most helicopters chase birds with their infra-red equipment...

Clearly helicopter pilots and crew haven't seen a bird before..

The only thing that tells me that it was filmed from a helicopter is the thread title, and it looks like it's a video of a video.

But that aside, I have no idea what the object is. I certainly wouldn't think it's a bird. Appears to be tumbling and moving quite fast, but I have no way of knowing how fast beyond how quickly it transits the landscape.

posted on Jun, 4 2014 @ 07:11 AM
link
If the footage is real, a possible drone test?
US drones to patrol Dominican-Puerto Rican waters, elnuevodia.com reports


25 June 2012
Santo Domingo.- United States Homeland Security Dept. has agreed to use unmanned planes "drones” to patrol the Mona Pass, as a way to fight the traffic of drugs and weapons from cyberspace, Puerto Rico’s elnuevodia.com reports Monday. One of those planes, capable of prolonged flight at varying heights, may been temporarily assigned to patrols between the airport at the former Ramey Air Force Base Aguadilla, Puerto Rico and Dominican Republic, the outlet said.

originally posted by: Arken
The video seems legit.
And seems that the pilot, shocked by the encounter, watch again the footage at his home...

If he manaaged to take the footage home why notjust upload the footage, why film a video of it.... Anyway, it was just a rock.
edit on 4-6-2014 by hellobruce because: (no reason given)

posted on Jun, 4 2014 @ 07:17 AM
link
At last an interesting video...
Could it be one of those ball shaped r.c. flying contraptions?
i cant imagine a drone tumbling like that it wouldnt help the filming at all.

Found what im talking about... 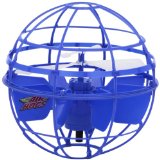 edit on 4/6/14 by SecretKnowledge because: (no reason given)

But not much more illuminating. It also makes some more unfounded claims. I'm not even certain this blog is the original source of the article.

It seems rather pointless to analyze this video, when we have no idea where it came from. And the YouTuber and bloggers decimating it are being unnecessarily cagey about its source.

This video could be anything or nothing. From something created for a movie or video game to some kid playing around with his new FLIR rig.

posted on Jun, 4 2014 @ 07:24 AM
link
I don't know why this couldn't just be a child's helium balloon, being blown along by the wind.....Just something ordinary being made to look extraordinary by the camera type used.

It does look to be taken from altitude above the Rafael Hernandez Airport and the background does indicate a circular path, not a straight one.

There is enough info on the screen that someone hopefully will be able to confirm - it looks as if you have altitude, heading and lat/lon for the heli plus altitude and distance of the target and possibly even bearing from the heli and other info as well.

If that is the case plenty there to get an idea of size, speed, track etc and with date and time check against prevailing conditions to determine whether under powered flight - would probably take a Bruce Maccabee to do that though !

posted on Jun, 4 2014 @ 07:38 AM
link
The first problem I am having here is the claim it's from DHS and shot from a helicopter, but then people pointing out it doesn't look like footage from a helicopter...and also question whether it's really footage "released by home land security".

In other words, that footage could be from ANYTHING, it could be a drone test run filmed or whatever even a flying bag.

Since the origin is suspect and the description doesn't even match what the footage shows I am VERY skeptical there...

posted on Jun, 4 2014 @ 07:55 AM
link
At 1:33, the object passes between the camera and the road. It's impossible to accurately gauge the distance between the object and the camera but we can be assured that even if it was flying within feet of the cars, its wingspan could be no more than about a third of the width of a car. Cars have an average width of about 6 feet. That would indicate a maximum wingspan of no more than about two feet.

At 2:04, you can see the object bank and the silhouette pretty much rules out a bird. Also, the underside is completely black and birds are warm blooded creatures so that further rules out a bird.

I'm going to guess it's some sort of small RC aircraft / drone.
edit on 2014-6-4 by theantediluvian because: (no reason given)

This video was uploaded to YouTube by José Martínez, a member of the Puerto Rican Research Group. He explains that the video was shot by a helicopter from Rafael Hernandez International Airport, which was formerly a United States Air Force base called Ramey Air Force Base (This base was named after Brigadier General Howard Knox Ramey, and not after General Roger Ramey as some believe. Roger Ramey is the infamous general who announced to the world that what was recovered in Roswell, New Mexico in 1947 was simply a weather balloon). Several federal agencies are currently housed at the Rafael Hernandez International Airport.
According to the website Historias Ufologicas en Puerto Rico y el Exterior, “In the video you can see how the object moves very quickly. In one part of the video you can see how the object is thrown to the sea at extreme speed,” and when it comes back out of the sea, there are “two objects on the screen.”

Researchers reportedly conferred with authorities from the Puerto Rico Joint Forces of Rapid Action (FURA), a division of the state police of Puerto Rico that coordinates operations between Puerto Rico police and U.S. federal agencies. These authorities confirmed that the UFO video was taken by a camera aboard a Black Hawk helicopter. The website asserts that “this proves that federal agencies in Puerto Rico have knowledge of the presence ovnis-extraterrestre and surveillance in the [hottest areas of] Puerto Rico are being monitored.”

When asked by YouTube viewers for more information about this video showing UFOs in Puerto Rico, Martínez responded by saying that, in order to protect the identity of his federal agency sources at the airport, he “cannot give more details.”

I knew Jason would be onto it straight away.

I don't know, maybe we'll get to the bottom of it soon enough.

posted on Jun, 4 2014 @ 08:16 AM
link
If you notice in the first few seconds of the film the camera its actually rotating around the object (maybe from a chopper), this would give the illusion that the object was moving in a large circle.

posted on Jun, 4 2014 @ 08:37 AM
link
Did anyone else notice the flash/glitch just before when the object disappears and reappears with another object? I wonder what's that about.

The doubling of the object is a bit strange too.

originally posted by: phantomflier
Did anyone else notice the flash/glitch just before when the object disappears and reappears with another object? I wonder what's that about.

The doubling of the object is a bit strange too.

Looked like a reflection off the water. It seemed to be videoed in FLIR.
edit on 4-6-2014 by draknoir2 because: (no reason given)

Thank you SBW. That is interesting.

It struck me as noteworthy that the speed of the object didn't seem to be slowed when it entered the water (also odd that it looked like it "doubled"). Those two points had me wondering if it was a reflection, but that doesn't work either, because when it submerged it was less visible... so that points to a physical object ...around the size of a van.

Puerto Rico has a storied UFO history. The scuttlebutt is that there is a UFO base down in the trench... well, until a better explanation surfaces (pun intended) I'm okay with that one.

If that was a drone or a drug runner... then the tech is getting amazing.

No idea what it is or how come this footage is being replayed on a PC/mac and then recorded on a pretty crappy res cam-phone.

I would like to see the original footage that would probably glean a bit more info on the object.

Near an airport though so there should at least be supporting radar tracking for the object as well.

originally posted by: weirdguy
It does not look like the UFO splashed into the water. It looks like it disappears and then reappears, like it was cloaking or something.


Why do you assume it would make a splash? Every report I've ever read about UFO's entering a body of water never involve a splash. We need to consider why they are only visible in the IR spectrum to begin with. The most obvious conclusion, but hardest to accept conclusion, is that they've found a way to make their crafts pass right through normal matter. They can probably travel right to the center of the Earth, imagine the scientific information one could glean by having a craft capable of travelling to the center of a planet or perhaps even into the center of the Sun.
edit on 4/6/2014 by ChaoticOrder because: (no reason given)

originally posted by: iskander683
a reply to: skyblueworld

I'm not sure what to think but I don't think the footage was taken from a helicopter. Could be from somewhere up a mountain or similar? The sounds in the background suggest that it's inside a building of some sort. It even sounds like there's a TV on in the background.

As for the object, I'll have to leave that to people who are much more intelligent than me.

If you folks were paying attention - you would all note that this is being recorded from a monitor - this is not the direct footage from the helicopter. The background noises would make perfect sense to me - and per Trueman - No, DHS didn't release it - someone filmed it off of a monitor on their phone and shared it with the world.

That; or its a fake. Who's got time for that though?

[Edit] Not to be rude - but the monitors bottom section is clearly visible for a large part of the video...
edit on 4-6-2014 by DigitalJedi805 because: (no reason given)


[Edit] Furthermore - it makes sense to me that someone would make a video of the video - places like DHS facilities don't just let you bring your flash drive in all the time. I'm sure that this gentleman was shaking in his boots while he was recording this.
edit on 4-6-2014 by DigitalJedi805 because: (no reason given)

posted on Jun, 4 2014 @ 09:56 AM
link
I work at a AFB in Florida and two separate times I've seen something that almost resembles a globe of liquid metal. They will just be floating there. its something you don't notice unless your really paying attention. its the strangest thing. The one man they interviewed on UFO Hunters also described seeing the same thing over the Roswell base 2-3 days Before the Roswell Crash.